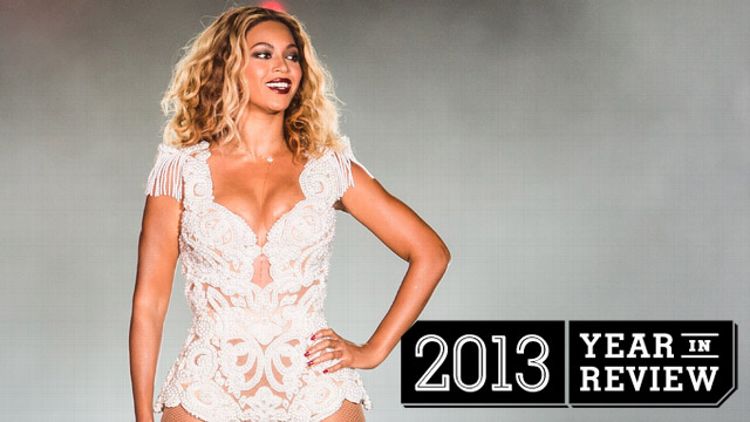 Since the beginning of 2013, pop fans have been looking forward to the end of the year. The fourth quarter promised us brand-new releases from four of the genre’s biggest stars: Katy Perry’s flower-petal-strewn Prism, Miley Cyrus’s apricot-vinyl-upholstered Bangerz, Britney Spears’s personal-musk-scented Britney Jean, and Lady Gaga’s hot-glued seashell hologram Artpop. It seemed like the perfect final four matchup, guaranteed to produce tons of hits and boost record industry sales. But the year’s pop narrative, stoked in endless thinkpieces and stan wars, veered off track. Nine months of anticipation for Q4 may have been too many. By the time the albums started to roll out, promo fatigue had set in for even the most die-hard fans, and the artists seemed worn out as well. Miley claimed she was already bored of twerking. Katy Perry decided in a fit of delusion that she wanted to put away her costume bras and be “more of a Joni Mitchell.” Lady Gaga had been hyping Artpop so hard as a culture-altering game-changer for what seemed like forever that it was bound to fall short. And when Britney appeared to promote Britney Jean, which was being pushed as her most personal album ever, it became obvious that we were not going to see any new pieces of Miss American Dream since she was 17. She never even performed any of the album’s first three singles, all of which flopped.

The Pop Wars promised us fireworks and delivered mere fizzle. Miley invited us to a raging party, but when we got there, it was more of a friendly stoner kickback. We assumed there would be glittery petits fours on Katy’s dessert table, but she served us a dry kale salad that self-righteously skimped on the dressing. Britney said we were going to the hottest club in town, but the music sounded dated, there was a strange and pervasive aroma, and worst of all, the dance floor was totally dead. Lady Gaga assured us she’d make up for all that with a hedonistic all-night rave in an unmarked warehouse, but she didn’t warn us we’d also have to sit and watch her do performance art. Well, actually, she did warn us, but we thought she was kidding!

With the big four titans of pop emitting a collective “pffffft” of hot air, people went elsewhere for progressive ear candy. Lorde came out of nowhere (New Zealand) to have one of the year’s biggest hits, and while she might have ruffled some feathers with interviewer-prompted commentary about her peers, she was never boring. A seeming dis of Taylor Swift became the springboard for a tight new friendship between the two royalty-metaphor loving songwriters. Swift’s album Red, released at the end of last year, quietly outsold everyone else on the strength of its endless parade of rock-inflected singles. There were also solid albums from the likes of Ellie Goulding and Selena Gomez, which became more impressive as the year went on and bigger names like Perry failed to show and prove. Rihanna didn’t release a new album for the first time in years, but still had a hit with a Showgirls-y late-breaking video for Unapologetic‘s “Pour It Up.”

At the very moment writers were rounding up their end-of-year lists, ready to declare the Pop Wars a draw, something happened. We got YONCED. The last time we saw Queen Bey, she was taking a critical drubbing for her HBO documentary Life Is But a Dream, which was like waiting for a static selfie turn into an animated GIF for 90 minutes. More shots were fired when she released singles “Grown Woman” and “Bow Down” with no videos or official notice. It seemed like Beyonce had fallen off. Was she just putting out so-called “buzz singles,” waiting to see what caught on, and then abandoning them when they failed to instantly become the next “Single Ladies”? Was she bored of being the hardworking performance machine she had been shaped into since birth? Was the Mrs. Carter Tour just a victory lap for her Super Bowl performance, after which she would take a long vacation and maybe pop out a sibling for Blue Ivy? NOPE, YONCE!

When Bey’s fourth album, 4, a congested mishmash of ballads and broadly appealing songs to step to at wedding receptions, was released in 2011, it seemed likely she was heading into her adult contemporary phase. Having hit the pop-star event horizon of her thirties, it almost felt like an early retirement was in store, that she’d caved to the weird cultural expectation that women become suddenly modest when they take on motherhood and marriage. Her new secret self-titled album pushed those fears aside and dashed all discussion of whether Miley, Rihanna, or anyone else was the next Madonna, by channeling the boundary-pushing, pleasure-seeking spirit of Erotica. Yonce descended from Mount Olympus and sat on our face. She easily smashed the competition, outselling every other record this year without any promotion other than her tour, which kept her in the spotlight and covertly laid the groundwork for the rollout of the stealth album, code-named “Lily.”

There had been much hand-wringing earlier about the state of pop and the music industry in general. Pre-promotion for music videos had reached a truly ridiculous point, saturated with lazy lyric videos and seconds-long teasers for three-minute vids — the Britney promotional cycle was a case in point. By the time a video came out, whether it was for Gaga’s “Applause” or Katy’s “Unconditionally,” it often felt anticlimactic. Candid shots of stars on set spoiled the outrageous outfits and narrative plots, making it possible to know everything about a video in advance. Beyoncé challenged the entire structure, showing what it really looks like when a pop star puts in work (bitch). This is not to demonize Britney, who is her own person with a knee injury that has permanently impaired her dancing. But Britney Jean‘s 10 tracks and half-finished air felt incredibly wanting to begin with, before the album was thrown into harsh relief by Beyonce’s late-night surprise.

Beyoncé also accomplished what none of the others could: It’s cohesive. With industry panic declaring the death of the album and the rise of an all-ringtones future, Beyonce made it plain that our expectations should and could be so much higher. With more than a dozen videos filmed secretly, and each one actually related intimately to the song, Beyoncé looked amazing. But it also sounds amazing, giving us what the other pop stars promised us in their promo cycles and failed to deliver in the product. Big, soul-stirring ballads? Check. Bangers? Check. Futuristic pop production? Check. A flawless combination of avant-garde pop music and fine art made accessible to everyone? Sorry, Gags, but … CHECK!

Beyonce made it obvious that 2014 will require the current roster of pop divas to step their game way the hell up if they ever want to get anywhere near her level. That is only a good thing. There are great singles on Bangerz, Artpop, Prism, and even Britney Jean, but they need videos up to the standards Bey just outlined. No longer will a lazy last-minute endeavor suffice, nor can you coast on one look for too long. High-cut leotards may go from shocking to banal very quickly, but so do platform boots and fetish robot gear. Britney is one of the most recognizable names worldwide, but even her die-hard stans were upset she was allowed to release as lackluster a project as Britney Jean. A brand is only as strong as its last success, and even a star as bright as hers can fade with some moldy dubstep.

Meanwhile, everyone had just about given up on the idea of a Beyonce album this year when she launched her sneak attack, and the cloying taste of Life Is But a Dream was replaced by the piquant zest of Beyoncé. All the complaints that Bey was too robotic at the halftime show, that she had gone too far into her narcissistic staged Instagram stream, that Jay Z was going to make her hide her light so as to not outshine him — who remembers that anymore? Just when critics were ready to declare the death of big-room pop, Beyoncé reminded us what a great pop star can be: a superhero, an inspiration, a goddess, a pseudo–best friend, bigger than life and startlingly down to earth at the same time. The most beautiful woman in the universe and also the girl next door. Most important, a great pop album is a soundtrack to everyday life. It can elevate sadness, hardship, and heartbreak into beauty and transform the mundane reality of daily life into an exquisite fantasy world. There’s only the immediate present, and for now, the present is YONCE.