The Walking Dead Season 3, Episode 3: ‘Walk With Me’ 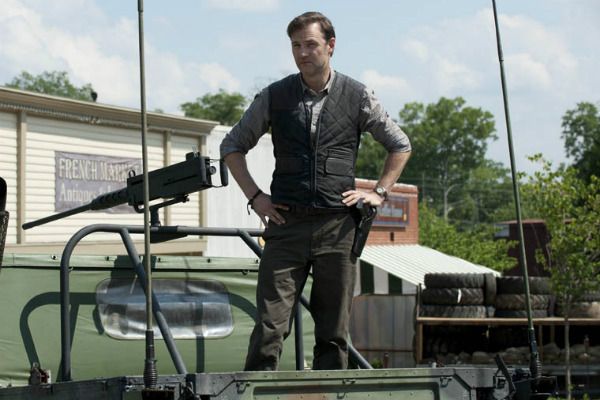 Last night’s episode of The Walking Dead introduced the Governor, a mysterious leader tasked with preserving a delicate fiction: that a return to civilization is possible, even while savage violence remains the order of the day. Winningly played by Brit David Morrissey — perhaps best known here for going face-to-face-lift with Sharon Stone in Basic Instinct 2 — the Governor seems genuinely torn between two warring passions: the love he feels from his citizenry when he keeps them protected and the primal euphoria only possible when jamming a machete into another man’s brainpan.

Is it a meta step too far, then, to wonder if showrunner Glen Mazzara can sympathize? Under his command, The Walking Dead returned last night to a more reflective state. Behind the Governor’s very big walls — in the macho apocalypse, barricades and fences are the new sports cars and yachts — there was finally time to ask the bigger questions: Why did this happen? What do we do now? And would you like some more eggs? For those who can’t help but find the living more interesting than the gnawing, this was a welcome sight. But even with the change in scenery — I’m particularly anxious to explore the inside of the Woodbury Antique Shop — this was still very much The Walking Dead. The episode’s most loving detail was reserved for its depiction of a bisected soldier, every strand of his glistening viscera captured in horrifically vibrant vermilion. As for a nerdy new character? Well, his name was Milton.

I don’t mean to harp on this too much, but: Milton! Just naming this nattering nabob something counterintuitive like Jock or Ndamukong would have accomplished so much more. Survivors on The Walking Dead tend to be as one-note and reductive as their bitey nemeses: Rick = leader!, Shane = trouble! Lori = the worst! So I was disappointed to see that even in the relative tranquility of Woodbury, humans are still either fodder or foils. I’d point out that swaggering, soliloquizing Merle — a thin character whose return has nonetheless been anxiously anticipated for reasons unclear to me — is little more than shorthand for a creepy meanie, but thanks to his proudly brandished stump, it seems the writers already made that joke for me. Even Andrea, who seemed so promising just a week or two ago, returned to her old harping ways once her fever came down, poking and prying at the woman who saved her life while lamely flirting with the man who just might end it. I understand the gratitude, especially considering how her own former group used to treat outsiders (kill them! Save them! Tie them up! Tie them down! Hokeypokey, 2x!), but didn’t her ménage à gross with Shane teach her anything about powerful, violent men? What was in that tea, anyway?

Thank goodness, then, for Michonne. Dreadlocked and deadly, she may be the perfect character for The Walking Dead: She barely speaks, yet looks effortlessly cool. In a show full of special effects, Danai Gurira’s enthralling face may be the best of the lot. Of course, there is something a little off-puttingly fetishistic about the way she’s been given nothing to do but glower — along with the hulking guard, wasn’t it a bit odd that the only African American actors on hand were there to provide silence and muscle while the white folks talked business? But Gurira is too electric to remain in the background for long. (As Michonne put it, “My shit never stopped being together!”) No matter the identity of Michonne’s toothless pets — who were quickly dispatched in a nod to both common sense and a rising CGI budget — Gurira’s strong screen presence suggests something The Walking Dead has been lacking from the start: a character who isn’t just well-suited for the apocalypse (the survival rate for Olympic-level archers seems to be close to 100 percent) but someone who outright prefers it. Like the ghoulish Governor, with his bubbling aquarium of skullfish, she strikes me as a thriver, not a mere survivor. Both seem to have taken the end of the world as an opportunity to reinvent themselves, not to sink further into the morally murky morass of the way things used to be. This spunky, occasionally sadistic attitude isn’t just a good prescription for staying alive, it’s also the recipe for more engaging drama.

As a non-comic reader — and a dedicated non-spoiler tolerater in the comments below — I don’t know the specific backgrounds of these promising new additions. But fresh blood is welcome, especially if it stays inside its host for the foreseeable future. Hope, even duplicitous, bourbon-sipping, soldier-stabbing hope, is better than Rick’s desperate alternative. “Walk With Me” worked, despite its sometimes clunky mechanics (“Rome wasn’t built in a day.” “That’s a bold comparison.” GET A COLISEUM, YOU TWO) because it expanded the universe considerably: We now know more about what happened to the Army (before the Governor’s bullets happened to them, of course) and we see that there are other ways to inspire followers, some of which involve showers. (Not gonna lie: It also worked because it was a wonderful respite from the Grimes family circus.) Could it be that The Walking Dead will finally begin to focus on the fragile future rather than the picked-over past?

“We will rise again,” crows the Governor over breakfast, and maybe it’s the tea talking, but I can’t help but believe him. It’s morning in what’s left of America! Just don’t forget to feed the fish.