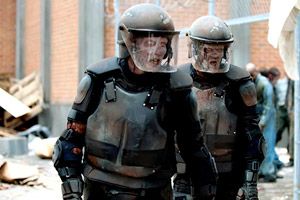 “Better to remain silent and be thought a fool than to speak out and remove all doubt.” A great man once said that — a vampire hunter by trade, I believe. But the wise words apply to those beset upon by all manner of monsters, especially the straggly survivors on The Walking Dead. After a massively troubled second season, one drowned in hokum and horseshit, the highly rated show returned last night with a burst of megaviolence and a deafeningly welcome blast of silence. The sight of a suddenly decisive Rick and his heavily armed compadres silently swarming a house like the military unit they’ve become (and without a trace of the squabbling, back-and-front-stabbing family they’d been) was both a self-referential wink from replacement showrunner Glen Mazzara and smart strategy on both sides of the camera. From the beginning The Walking Dead has worked best when brandishing a big stick, not when speaking, softly or otherwise. Besides, when someone’s trying to eat you the last thing you have time to do is criticize his table manners.

In my preview piece last week, I made the analogy that Mazzara — a veteran of well-run cable series The Shield and Hawthorne who replaced movie guy Frank Darabont at the helm — was tasked with being more of a crisis manager than a visionary. But maybe the better metaphor would be a mechanic: His job was to get The Walking Dead’s sputtering engine purring as loudly as the one on Daryl’s low-rider using only the tools he had on hand. (The biggest tool, of course, was Shane, but he bought it last spring.) And “Seed” is a testament to Mazzara’s considerable automotive abilities. The zombie kills — and there were a lot of them! — are as savage and gory as ever (more so, actually: The skin peeling off a dead guard’s skull, like a fava bean slipping out of its shell, was particularly unsettling). But Mazzara has also amped up the underlying menace, the deeper fear lurking behind the video game violence: The zombies are no longer a sickness, they’re a plague. Cresting like swollen rivers and massing into herds, they’ve permanently altered the landscape around them, giving a much-needed sense of scope to a show that too often settled for the small-bore (and, in the case of Dale, the big-boring).

Previously on The Walking Dead

Mazzara has also done his best with the sorry lot of characters left in his care. While Rick remains frustratingly wooden, at least he’s acting like a leader instead of launching into sweaty Socratic monologues about the nature of leadership. Weak links like Carl and Hershel have been quickly and efficiently remade as hollow-eyed killing machines. Even Carol, a women who spent two seasons tearing out what was left of her hair in various states of misery, has developed a hint of personality, flirting with Daryl by the latrine. (As for Daryl, his choice of owl-flavored lunch meat made me think of no. 6 on my all-time favorite David Letterman list: Top Ten Least-Used Hyphenated Words — sadly, “Mookie-Proofed” will probably never come up unless AMC relocates the show to Queens.) Lori, sadly, appears beyond saving: It’s apparently been months of blessed silence from her — and only moments since the welcome quiet of the teaser — but all of a sudden she “needs to talk,” stressing about the legitimacy of her baby and rehashing the extremely overhashed business with Shane. (“I’m doing things!” Rick sputters, as fed up as the rest of us.) Belaboring an already problematic character with a needless and uninteresting pregnancy may prove to be the one Darabont decision that Mazzara is unable to walk back.

Still, the biggest improvement in characterization occurred where I least expected it. I’m on record as being dubious about the inclusion of Michonne, a comic-based favorite who comes equipped with all sorts of fanboy sops (Big swords! Pet zombies on chains!) but little of what a series like The Walking Dead actually needs: wit, warmth, or any other vestige of humanity. But in her limited screen time, Danai Gurira sliced some of the skepticism right out of me with her haunted, hunted eyes. Even better, she’s had a positive impact on Andrea, long one of the show’s most challenging leads. Last season, caught in a vaguely misogynist game of dodgeball between diesel Shane and biodynamic Dale, she was as interesting as Hershel’s cattle almanac. But let loose as a feverish Louise to Michonne’s katana-wielding Thelma, she’s suddenly bursting with potential. The only thing more valuable than bullets in The Walking Dead is a character able to reflect the magnitude of the changed world and thus inform our reactions to it. Andrea’s arc, from conscience-saddled attorney to hardened survivor, is the most engaging of those remaining. Give or take a few shotgun shells, everyone else — from amiable Glenn to mute T-Dogg — seems indistinguishable from who they might have been before.

All told, Season 3’s leveling up — like some delinquent locavore, the action has gone from farm to prison — comes with short-term reward and, inevitably, some long-term worry. Under the masterful direction of Ernest Dickerson, last night’s premiere danced from one expertly executed horror trope to another, from the grisly hand-to-head combat in the yard to the claustrophobic found-footage scares within the cell block. And the one 25-to-undead-lifer who caught hold of sanctimonious Hershel’s meaty calf was finally able to do something those of us fed up with last season were dying to see. But when it came time for the hacky final moments I found myself unexpectedly empathizing with the old coot’s femur.

A certain amount of blood-pumping savagery is just what The Walking Dead needed to bring itself back to life. But after nearly an hour of it — interspersed only by some strangely timed fireside a cappella and a droopy Jeff Buckley–esque lights-out-in-lockup montage — I felt bruised and battered, like Mazzara was trying to cleave me from my doubts as roughly as Rick was trying to separate Hershel from his leg. But considered purely as an act of reanimation, the episode was impressive. In one brisk and brutal hour, Mazzara has finally managed to give these people something to do, even if they’ve still got nothing much to say.