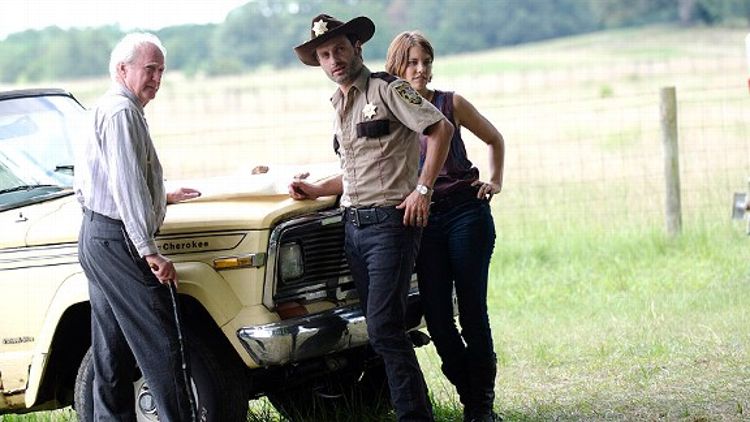 The zombies that menaced Morgan’s suburban safe house back in the pilot of The Walking Dead could almost be mistaken for human. Sure, they stumbled a bit, had poor-to-nonexistent personal hygiene, and weren’t much good for conversation. (Mention a witty “Shouts & Murmurs” piece in the last — really, the last — issue of the New Yorker and they’re liable to bite your head off. Literally.) But they were at least feasible simulacra of the people they used to be — so much so that Morgan himself had trouble pulling the trigger on the ravenous corpse that used to be his wife.

The physical upkeep of the zombies has gone to hell in the second season — last week featured a decomposing Christmas tree ornament with chewtoys for legs, while last night’s episode showcased an ambulatory Quaato — but the old metaphor still applies. Only this time it’s not the bad guys that are a pale imitation of something, it’s the show itself. Jammed full of sweaty anguish and portentous monologuing and paced slower than a stoned Kathakali revue, The Walking Dead ticks off all the boxes on AMC’s in-house checklist for quality television. (Damned if Rubicon was actually about anything, but it was expert at making it seem like it was about something.) But unless our heroes get moving again, they’re stuck — not only physically, but in a show that, from a distance, appears to be the sort of thing worth getting invested in, but be warned: Too much exposure can be fatal.

Fatally boring, that is. Because if you are one of those patient Kathakali enthusiasts who found themselves overwhelmed by all the action in last week’s episode — in which Shane gave himself a haircut and a horse doctor performed miracle off-screen bullet surgery on Carl — then “Cherokee Rose” was definitely more your speed. Seriously, people: The ornery torso crawling across a public park in the pilot covered more ground than this. Among the things that happened: Sophia remained missing, but maybe developed a taste for cat food; Carl took a nap in his dad’s hat; and Shane went full Of Mice and Men, wearing poor Otis’s oversize overalls and generally doing a decent impression of someone who mishandled a farmhouse puppy. Oh, Rick and Herschel also took some scenic strolls on the gorgeous, zombie-proof property (Herschel’s demand that everyone stop carrying guns seems like a super-reasonable request that definitely won’t come back to bite anyone in the ass — or head, neck, and chest — later), and indulged in the sorts of conversations about God and chance that sound a whole lot better on the freshman quad after indulging in some of Merle’s secret stash. As for Andrea, well, she wants her gun back, complaining “You may like rolling over, but I don’t.” Isn’t trying to turn yourself into a human Jiffy Pop back at the CDC the figurative definition of rolling over? Just trying to keep track here.

But, you say, what about Glenn? True, Glenn both saw action and got some this week. First, there was the discovery of a bloated, hissing zombie in one of the farm’s many wells. (Clearly not the well that Shane drained with his endless emo soak last week. If only!) While it’s unfortunate that a rural Borat fan made such prejudiced assumptions about the zombie’s religious affiliation, the only reasonable thing to do is seal off the whole thing, right? Wrong! The gang decides they need to go zombie-fishing instead. (If only noted angler Amy were still alive!) So, just to be clear, if the plan works they’re going to continue drinking from this well? After there was a zombie in it? I dump out a glass of water if a fly lands on the edge of it!

But sanitation takes a backseat to story and our heroes decide to bait their hook with a juicy slab of Glenn. And I must pause and exclaim, yet again, this is the plan? There are multiple wells! Also, it’s a farm — use an animal! But no, Glenn goes merrily spelunking down into the pit, and of course the pump breaks, and it’s up to T-Dogg to yank Glenn out — even though T-Dogg has an established history of dropping things at the worst possible moment. Luckily, Glenn is pulled to safety and he even somehow manages to lasso the rancid floater in the process. Emboldened, the gang then tugs so hard their catch is torn in two and all of his gross guts shower down into the drinking water. To tie a ribbon on such a well-thought-out and well-executed operation, T-Dogg helpfully smashes the zombie’s face in. Score one for the SFX department! And minus 100 for the logic department. You risked Glenn just so Shane could have another chance to exfoliate? Honestly, the value of human life on this show fluctuates more than the Greek stock market.

In what has to be the busiest day of his life, Glenn also goes on a romantic horse ride to a suspiciously zombie-free Small Towne, where he and Maggie do it in a ransacked and abandoned drugstore. This pharmaceutical booty call seems both wildly unsafe and kind of gross — especially with the horses tied up outside. Isn’t leaving a wild animal unattended in a zombie apocalypse sort of like leaving a pan of lasagna near Garfield? But no matter — in this instance the undead show a little decorum and allow Glenn to be destroyed by Maggie’s postcoital burn (“It was a one-time thing”) instead of by their shredding incisors. It’s hard not to shake the feeling that either Herschel’s family is in cahoots with the zombies or just able to repel them. It’s no wonder Rick wants his people to stay for awhile. But the very fact that the ol’ Doc has a change of heart — spurred by memories of his own bad father expressed in honeyed homilies that emerge from his mouth positively dripping with moonshine and apple butter — means that none of them are long for this world, or, you know, the world in general.

The episode’s dramatic close featured Lori self-administering a pregnancy test, which was plenty gripping — not the question of whether she’d be able to successfully urinate in a field or if the unborn baby she’s carrying will have a bad Southern accent or a bad British-person-trying-to-do-a-Southern-accent accent — but whether something, anything might emerge from the treeline and devour her. No such luck.

Next week: Daryl shares an old family recipe for horse chili, Carl rolls over, and Herschel delivers both sides of the Lincoln/Douglas debates in uninterrupted monologue. No wonder Sophia ran away!