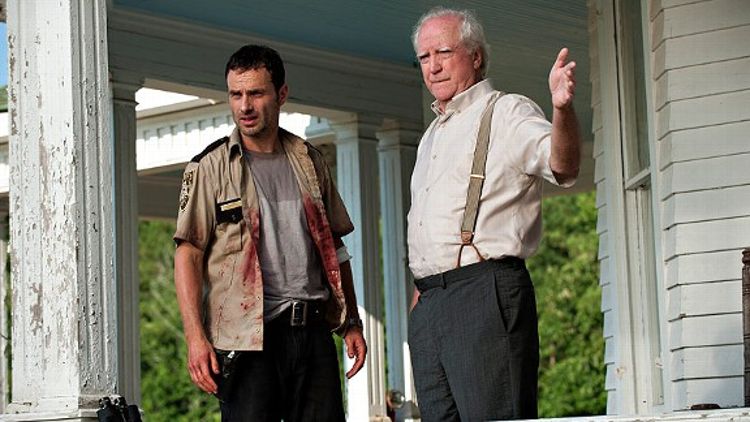 Some might argue that the great gift cable television has given storytellers is the lack of limits: Freed from network standards and practices, showrunners are free to lard their adult-themed hours with rivers of blood, rails of crystal meth, and, when all else fails, some totally non-gratuitous sexposition. I would argue the reverse to be true: It’s the limits that have made the shows better, specifically, the limited number of episodes. The foreknowledge that any given season is going to consist of a set number of hours and that all of them will air, even if literally no one is watching (I see you, Lights Out! I mean, I didn’t watch you, but I see you), allows writers and producers to take the time to consider their craft. If done correctly, every season can have a stated purpose and a beginning, middle, and end. It was a lesson that extended past the premium channels with Lost: By the third season the characters were running in circles, creatively and literally. When they were given an end date, they were also given a destination. (That the destination was a hug-filled heaven is infuriating but irrelevant.)

And so it was particularly disheartening to see The Walking Dead get Lost so quickly in its sophomore season. After a bold and body-filled premiere, the second episode remains, quite literally, stuck in traffic: a ponderous, weepy depressing of the pause button while characters are broken up into manageable groups and big-picture plotting is ignored in favor of the present crisis. Of course, the present crisis is a big one: After a flashback detailing Lori’s muted reaction to news of her husband being shot (Really? No interest at all in where he was shot?), we cut to Rick’s desperate run across a meadow carrying his equally shot son, Carl. Fortunately for Carl, he’s the beneficiary of some serious TV Luck: First, the bullet was slowed down considerably as it passed through its true target, the giant buck. Second, on the other side of the woods is a safe destination, what appears to be Colonel Angus’s mansion, only the good colonel is now a kindly cornpone doctor. Soon Carl is being tended to by a bevy of hot sister-nurses and Rick is being pumped for both his (conveniently!) matching blood-type blood and the roiling emotions Lori once felt he kept buried. No longer!

The pitiable sight of poor Carl in agony, being harvested for bullet fragments, is much harder to watch than any supporting player being snacked on by a hundred undead extras. Rick and Sugar Shane share some extremely intense feelings with one another, sweating into each other’s necks about responsibility and whether all of this has just been a “sick joke.” (The other people in the room, presumably, quietly look away or pretend to play Angry Birds on their non-functioning iPhones.) Eventually, a plan is hatched: One of the Sister Nurses will ride a horse into the woods to find Lori (sure) while Shane and Otis, the portly farmhand who accidentally plugged Carl (played by the dependably excellent Pruitt Taylor Vince), will venture off to the local school in search of some operating equipment. Otis’s farewell — with the wifely weeping and the promises of returning Rick’s gun to him — was almost Kenny-esque in its foreshadowing. The big lug might as well bring along a roasting spit and carry an apple in his mouth for flavoring.

Meanwhile, a whole lot of other stuff doesn’t happen. Back on the highway, Dale notices two important developments: one, T-Dog is in very rough shape due to an infection in his badly sliced-up arm. Two, T-Dog’s name is T-Dog. I was certain it was T-Bone! This is both a very embarrassing gaffe on my part and kind of a larger indictment of the show and how little time it’s spent characterizing its one African-American member. And, for the briefest of moments, it seems like T-Dog might be the slightest bit self-aware: “I’m the last black guy,” he fumes. “You know how precarious that makes my situation?” Yes, we do, T-Dog! Does this mean you’ve actually seen movies before — perhaps even one with zombies in it? That there could be the slightest wink of meta-consciousness at work? But, no. The Ol’ Dog just means that everyone else remaining is a nominally racist cracker. It’s just a fever, folks! Nothing insightful to see here.

Out in the woods, the rest of the gang wander aimlessly in search of Sophia but soon worry for Rick and Carl takes over because, after all, they are the main characters. Leave it to Daryl to be the voice of optimism, telling Carol point-blank “we’re gonna locate that little girl. Am I the only one Zen around here? Good lord!” Wait a second … despicable bad boy with a thing for showing his arms suddenly transforming into a bad-ass quip machine with a heart (and mane) of gold? Somebody stop him! He’s Sawyering too soon!

Still, the nature walk does provide the hour’s one truly haunting moment when Andrea, separated briefly from the group, continues a one-sided conversation with someone walking alongside her. Someone who is no longer alive. But one gasp isn’t enough to allay the overall concerns: Eventually the show is going to run out of cool ways to do gross things and an overall point or goal — be it geographic or metaphorical — will have to emerge. Because a successful season of television can’t be paced like a video game — running blandly from crisis to crisis, from boss level to boss level. Shane and Otis’s suicide medical run at the end of the episode was gripping but bloodless: There’s an objective, an obstacle, and some bad odds. The effect is like watching someone else play Resident Evil. At a certain point The Walking Dead is going to have to start heading toward something instead of always running away.