The $6.5 Million TimberBiel Nuptials … and Other Horror Stories From This Week’s Tabloids 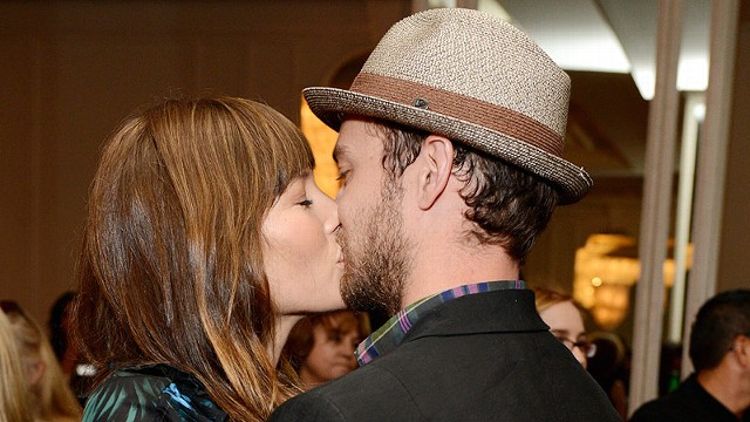 Justin Timberlake & Jessica Biel: “You could safely call him a groomzilla.” Having gotten over his “inability to commit,” Timberlake threw himself into planning the $6.5 million ceremony, renting an Italian resort for the wedding and flying guests in on chartered jets. “Justin planned a series of mini-celebrations leading up to the evening ceremony. Guests were treated to a seafood feast followed by a fireworks display on the beach the day they arrived.” He chose Biel’s “6-carat princess-cut engagement ring without consulting her” and “picked out Jess’s gown from sketches. She trusts him.” Well, that’s her first mistake.

Robert Pattinson & Kristen Stewart: “Ever since he took her back, she’s been like a different person. She’s so needy. She knows Rob isn’t 100 percent back in their relationship. That’s why she’s being so clingy.” Staged photos of the two kissing by a pool leaked last week. I for one think we will find out the actual truth about this publicity scenario the minute the Breaking Dawn: Part 2 promo ends.

Christina Aguilera: “I don’t like to wear underwear. I like to be as free as possible at all times. It’s empowering. It’s pussy power!”

Teen Mom Farrah Abraham’s Plastic Surgery: “I’ve hated my nose since I was 13.” But now with several new surgical procedures, “I don’t have to hate anything on my face ever again, I feel gorgeous!” I’m sure that will last forever. Farrah, “a beautiful girl before the scalpel touched her skin,” said it “was very worth it.” She already looked fine, and says “I was able to get work as a model.” She held off on surgeries until the mature age of 21. “I wanted to be fully developed, and I feel 21 is that age.” She told daughter Sophia, “Mommy just wants to be a beautiful butterfly.”

Taylor Swift’s Boob Job: Lord knows she can afford it. Swift has admitted to “body issues,” and a surgeon swears she went under the knife to get bigger tits. “They’re just so much bigger, rounder, and fuller.” Maybe it’s just padded push-up bras? Either way, Swift will never, ever admit to getting breast implants, even if she did.

Snooki Update: Her favorite movie is Avatar. Also, “I’m waiting for my nipple to slip out. I want a nip slip! I think they’re funny. I ask my publicist all the time if I can plan one.” Hire Kris Jenner as your publicist and I guarantee you can. Motherhood hasn’t changed Snooki too much. “I’m gaudy, and I like over-the-top things.” Her new baby Lorenzo is “a brat, he always wants to be held, he always wants attention. He’s like me!” She likes being a mom, but admits “it’s exhausting.”

Misc/Etc: “I wore Beetlejuice’s pants!” “He started acting like a sociopath” “spotty notties” “She’s sly like a fox!” “He can spin our giant wheel any time!” “up close and purr-sonal with a lioness” “It’s great to be married” “a controlling, fame-hungry man with two sides as distinct as Jekyll and Hyde” “She’s a wreck” “holding the potentially humiliating information over her head while he flirted shamelessly with other women” “Something isn’t right about him” “now you think of music, glamour, that big smile” “I lost myself” “She clearly looks better now” “Her nose is smaller, her butt bigger” “very superficial” “the fancy furball” “OMG, MY POST-BABY BODY’S GROSS” “You’re obsessed with me — just make out with me already.”

Ryan Lochte’s Favorites: The swimmer’s favorite movie is Gone in 60 Seconds, the car theft ring movie starring Nicolas Cage and a blonde dreadlocked Angelina Jolie. His celebrity crush is Hayden Panettiere. He wants to go to Brazil because “I hear it’s a sexy place.” Oh, and “I don’t watch much TV, but Entourage reruns never get old.” JYEAH!!! Ryan Lochte is the perfect all-American sex idiot.

Colin Farrell on Fatherhood: “I literally said, ‘I’m not changing! I’m gonna be his friend!’ Like a fucking 28-year-old drug-addicted drunk friend is exactly what my 6-week-old son needs.” I dunno, Colin, 6-week-olds can party pretty hard.

Oprah: “Bathing is my hobby. I love creating bathing experiences — bath gels, bubbles, crystals, salts, lavender milks.” What are lavender milks? I’ll refrain from blaming bath salts for the failure of OWN. “I go waaaaaay prune.” Me too, O.

Mariah Carey’s Eight-Hour Massage: “Ambien? A white noise machine?” To unwind, Mariah “arranged an eight-hour rubdown while she got shut-eye at her L.A. mansion.” Mariah snoozed while the masseuse tended to La Carey’s aches and stress spots. She also had an interesting request for background ambience. “She insisted Bruno play on repeat. It looped the entire time!” Mariah’s life is awesome.

Miley Cyrus & Honey Bass Bass: Miley installed subwoofers in her house and likes to use her system to watch Here Comes Honey Boo Boo. “When I hear her go, ‘Holla for a dolla!’ it’s like the whole house shakes.”

NeNe Leakes: “People think I am super-sassy and fabulous every day. That’s not the case.” She may be done with Real Housewives of Atlanta, but “if nothing else, I want to occasionally show up and be like, ‘I’m back, bitches!'”

Justin Timberlake & Jessica Biel: At their wedding they “hired 180 locals to dress as peasants and dotted the hillside with 50 sheep to transport visitors to the 1800s.”

Advice From President Barack Obama: If you want to be president someday, “Be careful what you post on Facebook! And most of all, take your education seriously.”

Misc/Etc: “It was a very dark period.” “Royals can get six!” “Oh, oxblood!” “Orange you glad you’re in Cancun?” “My high heels sleep in there!” “an outrageous cotton candy afro” “She wore a flak jacket and protective gear for a land-mine scene” “went goth in latex” “Corpse pose!” “They always look so happy” “He’s very traditional!” “They are both young and ambitious” “a rare, adult-size burger” “Autumn in New Jersey!” “We’ll look like ravers!” “mom jeans, anyone?” “Basically I’m starving. It sucks.” “She wants to look amazing at her wedding” “the prize she has coveted most: a baby!” “She feels girls are too much trouble and can be nasty to their mums” “Well, I can’t cook” “All my friends were ’80s dancers, but I was ketchup!” “I kill zombies, then I go home and become a dad!” “icy bon mots”

The Bachelorette: Emily Maynard and Jef Holm may have split, but “in the Bachelor/Bachelorette world of engagements, it’s not over till she gives the ring back to ABC. (Yes, it’s in the contract!)”

John Mayer & Katy Perry: They went to dinner in New York and “were holding hands throughout the meal and they definitely looked like a full-on couple.” He went to her Best Buy concert, and she met his dad Richard at John’s birthday party. Honestly, as long as Kim and Kanye are out there stunting for the paparazzi, John Mayer and Katy Perry will seem like a low-key regular couple in comparison. Unless they all meet up and have a key party or something. It could happen!

Scarlett Johansson Rebounding: After splitting from ad exec Nate Naylor, she’s been seen out “with artist Domingo Zapata and actor Sam Rockwell.” Anyone but Sean Penn, Scarlett. From now on I will suggest that all stars hook up with Taylor Swift.

Avril Lavigne: “When it comes to fall, I like to be casual. I love items with skulls and studs.” NO DUH, AVRIL. How do you think Avril feels about Taylor Swift?

Lizzy Caplan’s Fall Fashion Picks: “A long coat because it makes me feel like John Cusack in Say Anything.” Also like a school shooter. Sorry, that was in horrible taste. Lloyd Dobler is not a murderer, he’s just a weird kid who hangs out by himself all the time and stalks women and wears really long coats. Janis Ian from Mean Girls and Lloyd Dobler might get along, Janis kinda resembles Lili Taylor’s character, Corey Flood, from Say Anything. You know who else writes a lot of vitriolic songs about her ex-boyfriend and plays them in public? Taylor Swift.

Misc/Etc: “She’s been forced to get real” “running wild with his ‘Twitter girls'” “in emerald-green sequins, of course!” “She wants a guy to make her his top priority” “sporting vaguely kinky knuckle gloves” “bundled up against the autumn chill” “WHAT’S IN THE BOX” “Liev Schreiber’s smoothie” “in case the noises were made by evil spirits” “Why in hell would you want to?” “the ghost of thief Dick Turbin, executed in 1739, and his horse, Black Bess” “She is very cuddly” “Hey Rabbi Idiot” “classy but extravagant” “No one has told her to slow down.” “She wants guests to feel like they’re in a fragrant cloud!” “your cousin the accordion player” “Beyonce, who will be there anyway” “She’s stuck behind bars and can’t intervene” “Kanye is a grown man” “a reputation for wild partying and internet hook-ups”

A True Fact: “Whenever a young female celebrity is partying, Wilmer Valderrama will be there.”

Psy: The rapper, whose real name is Park Jae-Sang, reflects. “Last year, I parodied Beyonce, wearing a women’s swimsuit. With the old Psy, I only thought about how much the fans would be psyched about my kooky performance. But now, after being married, these racy costumes don’t feel all that ‘comfortable.’ I kind of feel like a clown. Do I still need to cross-dress to make my fans happy? These thoughts make me question myself as an entertainer.”

The Jolie-Pitt Boys Are Players: “Maddox is so bold that he will bluntly ask a girl for her number after telling her she’s hot, no matter who’s around! Brad has given his boys ‘the talk’ about respecting women, pointing out that they don’t even own phones to call girls on.” There’s no way those kids don’t have phones.

Misc/Etc: “She looks MILF-tastic!” “George Clooney sang with Neil DIamond” “Gerard in a long blonde wig with sunglasses” “Hugh Dancy bought some gigantic gourds” “showed off her shapely legs” “a fringey Fergie” “Martha Stewart loosened up” “worked their hips with their hoops” “Novel-Named Newborn” “played with an eerily lifelike Keith Richards marionette” “Alana ‘Honey Boo Boo’ Thompson loved her some spaghetti” “Col-bear?” “White collar, criminally chic!” “her reign as the queen of print-pairing” “Bitch stole my look” “millions of fans are rooting for you and hoping you find peace!” “ask why he would want sloppy seconds” “even tom Cruise needs a wingman” “Candy corn! I will eat them until I get a migraine!” “looking stylishly grungy” “ACTRESSES FLASH SIDEBOOB FOR MAXIMUM EXPOSURE”

Overplayed Song of the Week: P!nk, 'Blow Me (One Last Kiss)'