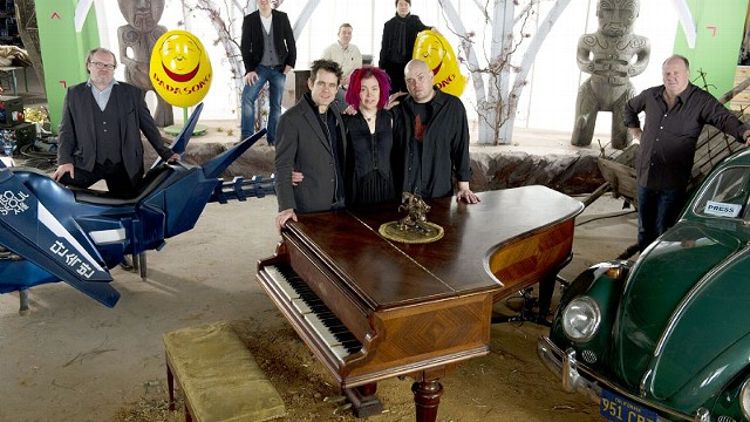 Lana and Andy Wachowski did one of those epic hero’s-journey-of-the-entertainer profiles in The New Yorker this week, even though their next movie, an adaptation of David Mitchell’s supposedly unfilmable novel Cloud Atlas, isn’t out until October, and despite abundant evidence suggesting that getting your arc documented in The New Yorker on the eve of the release of some huge project is the quickest possible way to just hex the shit out of that project. Just ask Andrew Stanton, whammied with kindness by Tad Friend five months prior to the release of what turned out to be John Carter, if you can find the part of the desert he’s buried in. Here, of course, the usual “Can this person who’s waited his whole life for this one moment stick the landing in a way that somehow causes the clueless suits who doubted him to crash their car into a manure truck?” tension isn’t the only draw. Lana and Andy were the most press-shy world-builders in this or any other alternate-timeline way back when Bill Clinton was president, bullet-time fight scenes were a novelty, and Lana was a man who went by Larry. So you’re not only watching acclaimed fiction writer Aleksandar Hemon attempt to swag it out, acclaimed-fiction-writerishly, within the confines of one of magazine profile writing’s genteelest genres — you’re waiting for the moment, and it’s coming, in which Lana makes a statement about how certain things should be private by saying the words “surgically constructed vagina” in The New Yorker.

First, though, there are details. So many details! Larry and Andy, as kids, once wrote a 300-page role-playing game called High Adventure! (Of course they did.) Lana Wachowski uses a copy of the Marquis de Sade’s 120 Days of Sodom as a doorstop in her Berlin apartment! (Of course she does.) Dino De Laurentiis plied them with champagne and lascivious stories about beautiful actresses and then did something unscrupulous! (Salute!) Tom Hanks drinks coffee from an NPR cup! (You are now freaking out!)

We do “see” Lana right away, in the second sentence, shouting “Cut!” But the first reference to her transgender status is withheld until the first paragraph of the second section, where it’s dispatched with a quintessentially New Yorker–ish parenthetical — “Lana (who is transgender and, until 2002, was called Larry)” — as coy and elegant and understated as a calling card placed in a foyer by some white-gloved House of Mirth character. Hemon goes on to refer to Lana as Larry when referring to events in the past, and as Lana in present-day scenes, a semantically expedient decision that also creates resonance between Lana’s story and the transmigration-of-souls themes in Cloud Atlas; so begins a story that is very much about Hemon replacing the golden-idol part of this story (Lana’s transgender status) with a bag of sand (the saga of Cloud Atlas‘s production) without being crushed by a giant rolling boulder.

It helps that it’s a bag of pretty interesting sand. There’s the odd ’90s-revival aspect of the Wachowskis’ team-up with Tom Tykwer (another filmmaker who made his own hyper-stylized meta-action movie, Run Lola Run, in the late ’90s, but whose success was so dwarfed by the Wachowskis’ Matrix films that their collaboration is kind of like Pearl Jam taking a reunited Frente! on the road); Hemon describes the trio as looking like “a former alternative-rock band — the Cinemaniacs — overdue for a reunion tour.” (I picture Lana on electric violin, the band itself as a “proggier Dambuilders.”) Lana calls Tykwer her “long-lost brother.” In a way, it’s perfect: The book is from 2004, but feels very Y2K-panicky in its millennium-spanning scope, its anxiety about our return to an apocalyptic Stone Age. Cloud Atlas could potentially be the best movie of 1999, as suggested by that Titanic-slams-into-What Dreams May Come maxi-trailer. The process of adapting the book is described; it involves much manipulation of index cards by Tykwer and the Wachowskis, the abandonment of the book’s spellbindingly symmetrical construction in favor of a more traditional flash-forward-and-back structure (Dude, spoilers!), some boogie-boarding, and dinners at which “Andy’s ‘world-famous’ chicken roasted on a beer can was often the main dish on the menu.” (Dude, spoilers!) We arrive at what students of the poisoned ass-kiss of Eustace Tilley will recognize immediately as the Possible Moment of Retrospective Irony, as David Mitchell gives the Wachowskis’ script an enthusiastic thumbs-up and says, “This could be one of those movies that are better than the book!” while hoisting “pints of Murphy’s stout at a local pub” with his adapters, oblivious to the silent screaming of the ghost of Anna Faris.

Another long paragraph regarding Lana’s gender identity in which she uses the word “betwixt,” charmingly, spins immediately into a recitation of the duo’s impressive nerd-world credentials — a formative encounter with 2001, borderline-worrisome amounts of D&D, a quixotic youthful attempt to obtain the rights to The Princess Bride by cold-calling William Goldman (who cold-hangs-up on them) — and some early non-movie jobs that paid in metaphors: “They once built an elevator shaft without any plans or previous experience, having projected unquestionable confidence to the people who’d hired them — not an unuseful talent in the film business.” There’s always the moment in these extended New Yorker profiles where the writer, drunk on bottomless word count, climbs to the top of a stack of Marshalls and starts playing a seven-minute reporter’s-notebook solo; this moment arrives with the discussion of the Wachowskis’ seven-issue stint as writers of Marvel Comics’ Super Heroes From the Mind of Clive Barker: Ectokid.

We learn what the Wachowskis’ political-sci-fi-faux-documentary movie Cobalt Neural 9 was going to be about: “Curious about how the early aughts would be perceived in the future, the Wachowskis imagined a documentary film made eight decades from now, looking back at the country’s plunge into imperial self-delusion. In order to write a script … the Wachowskis were filming interviews with people, from Arianna Huffington to Cornel West, who they thought might be able to help them elucidate their concerns. I was invited to participate and was costumed to look as if I were speaking in 2090. Dressed like a Bosnian Isaac Hayes (with sparkling lights attached to my skull, a psychedelic shirt, and a New Age pendant), I ranted about the malignant idiocy of the Bush regime.” (Huffington 2090! I hope Arianna plays Skynet.) This ends up being an important moment, though, because Hemon then explains that his willingness to be filmed looking ridiculous in a last-minute Timothy Leary Halloween costume led (full and affectionate disclosure) to his befriending the Wachowskis and getting surgically-constructed-vagina levels of access to the ins and outs of this film’s journey to the screen.

Inevitably, market forces — the Big Bad in every story like this one — show up to ruin Christmas. Warner Bros. decides to hold off on a vital distribution deal after putting Cloud Atlas through an “economic-modelling process,” in which past performance of a similar movie is used to project a prospective film’s returns. “The template that had been used, according to the Wachowskis, was Darren Aronofsky’s The Fountain (2006), because it had three autonomous story lines set in different eras; The Fountain, which had a mixed critical response, had lost almost twenty million dollars.” (In fairness, the Wachowskis do point out that the movie used to economically model The Matrix was Johnny Mnemonic.) Anyway, the movie is doomed! And then it’s saved, when Tom Hanks agrees to be in it and the Wachowskis manage to boil the story down to one totally idiotic sentence about redemption: “Tom Hanks starts off as a bad person,” they said, “but evolves over centuries into a good person.’ Warner Bros. was convinced … ” (Also: When the Wachowskis meet with Tom Hanks, they convince him to do the film by pointing to his copy of Moby-Dick and the 2001 poster on his office wall and saying, “That’s what we want to do.” We do not find out if it was Lana or Andy who got to say “Boom” and drop the mic.) But then the movie is doomed again, when an unstable financing structure puts the budget in jeopardy! Previous adoring-New Yorker-profile subject James Schamus comes up with a plan to save the movie that doesn’t work.

But then there’s a line break and we are on the set, so obviously a movie did happen. The Wachowskis are revealed as givers of golden-ticket-like envelopes containing unmentionably generous amounts of money, per Ectokid artist and Matrix storyboardist Steve Skroce: “After the success of the first Matrix, they were able to get points on the box-office, video games, etc. They had a dinner at this great Italian restaurant in Santa Monica and all their key collaborators were invited. At each place setting was a golden envelope with a check inside. I’m not sure who got what, but I know what I received was far beyond what I could ever have guessed or hoped for.” (The Wachowskis are Willy Wonka–like! By the end of the next paragraph David Mitchell will say being on the set of their movie based on his book is like being “Augustus Gloop in the Wonka factory.” No one is quoted as saying that the Wachowskis have “created a world of pure imagination”; displaying the restraint you expect from a National Book Award winner and MacArthur-certified genius, Hemon himself does not ring the “imaginary world” bell until the last sentence. Genius!) The film is screened for a group of studio executives including Warner Bros. president (and the Wachowskis’ old ICM agent) Jeff Robinov; “the executives tracked them down in a nearby office and delivered a spontaneous burst of applause.” The spontaneity of a round of applause delivered by a roving group of studio executives is not questioned. A helicopter carrying the Wachowskis climbs up, up, up into beautiful clouds.

If The Master Is Any Good, You Can Thank Joaquin Phoenix's Fake Rapping