The ‘Term’-ies: Handing Out Awards for the Most Confusing Film Franchise in American History 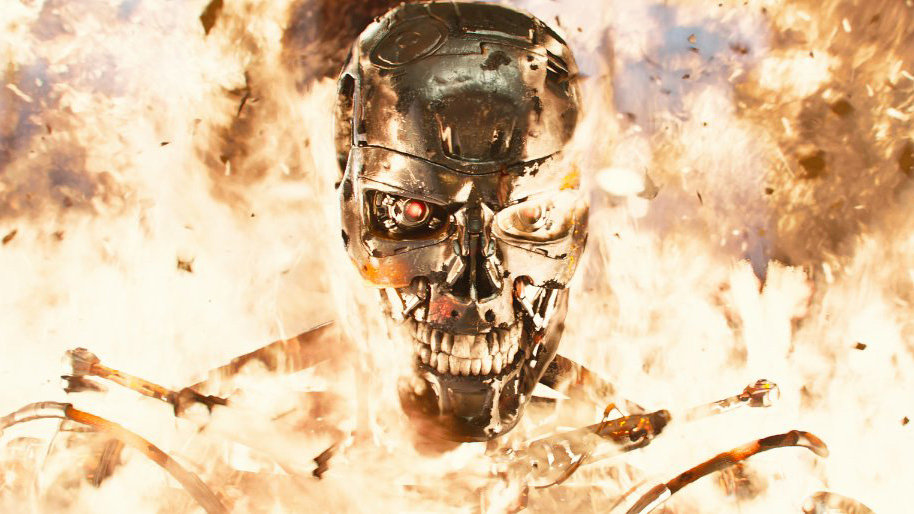 Well, dear Internet, here we are, getting another Terminator movie. As Arnold Schwarzenegger’s T-850 Model 101 says in the third installment, “Desire is irrelevant.” Half of this franchise’s cinematic output has been good-to-great, the other half bad-to-worse. Where will Wednesday’s Terminator: Genisys alight on this cosmic seesaw? We can be comfortably assured (if vaguely sad) that whatever’s coming won’t be better than the second one and probably won’t be worse than the last two.

In the remaining hours we have left with merely four Terminator movies in our lives, let’s pause to celebrate the little things. The glowy red eyes. The mechanically improvised stabbing weapons. Eddie Furlong’s bangs. You, too, can harvest shreds of joy from a series about killing machines learning how to make dry quips at increasingly opportune moments. It’s more possible than you think!

‘I’ll Be Back’ Utterance Power Rankings

1. Terminator: The classic first instance when Arnie drives through the front of the police station. He did say he would be back, desk sergeant! He did say!

2. Terminator Salvation: We should be sick of this trope by the fourth movie. I sure felt sick of it in the third movie. Maybe it’s the line reading from Christian Bale, who can be counted on to commit to just about anything and loves a movie that does not require him to smile. Whatever. It works.

3. Terminator 3: Rise of the Machines: It’s not seen in the above video, but the Terminator does try to squeeze in two different variations on the inexplicably beloved catchphrase in the threequel. This one’s actually an “I’m back.” It’s fine.

4. T2: Judgment Day: It’s Schwarzenegger’s first throwback to the line, and it’s kind of a throwaway moment in the elevator. After the antics in the original, it’s mildly disappointing that the Terminator does not reenter the elevator behind the wheel of some kind of building-crunching vehicle.

Every Terminator Scene in Which Humans and Robots Sent Back Through Time Must Somehow Acquire Clothes, Ranked

1. T2, the Terminator: Some good body-type humor on his viewscreen, plus the added value of the fourth guy with the pool cue who has just seen this man kill three people and thinks for just a second that he might like to also have a go at him.

2. T1, the Terminator: Goes a little overboard disciplining Bill Paxton1 and pals, plus he ruins at least one perfectly good shirt by pulling a human heart through it.

3. T3, the T-X: Girl. You landed IN A DEPARTMENT STORE WINDOW. Why murder that nice lady? How does blood on vinyl smell after a couple days? THINK!

4. T3, the Terminator: A variation on the T2 scene, but with cowboy strippers. There’s also a “talk to the hand” joke that begets a second one later on. Arnie also destroys a perfectly lovely pair of star-shaped sunglasses. I will not show it to you. This scene is an abomination.

Most Specific and Inexplicable Knowledge Gaps in Terminator Programming

2. T2: Jenette Goldstein/T-1000-as-foster-mom stabbing Xander Berkeley/foster dad THROUGH A MILK CARTON and into his mouth.

3. T1:The crawling torso of the Terminator as it chases Sarah through the factory. Those of you who saw the original film before you were maybe quiiite old enough to take it all in will remember this as the shot you didn’t stop seeing in your nightmares.

4. [TIE] Every instance of the Terminator robo-skeleton staring into the camera in slow motion. It doesn’t matter how many times they go back to that well. It’s scary as hell, and unlike Schwarzenegger, it never, ever gets old.

4. [TIE] T3: While this jockeys with T4 for the least compelling Terminator installation, the T-X driving a police car from the backseat with her hand through one officer’s chest is pretty swell.

6. As is the particle-accelerator-aided dismantling of the T-X body.

7. T4: The shot where the camera pulls back to reveal Sam Worthington’s Terminator innards is really, really effective.

8. T4: Marcus Wright (Sam Worthington) interfacing with Skynet, which is helpful both for his character’s backstory and for him as an actor, as it does not require him to move his face.

T2, young John Connor trying to get Sarah not to kill his surrogate robot dad: “Hey, mom, listen to me so I can learn to be a leader, grow up, and SAVE THE HUMAN RACE.” Ugh, fine.

Top Five Rank Implausibilities, Setting Aside the Premise That We Are Watching Killer Robots Sent Back Through Time

1. T2: Miles Dyson’s kinda-sorta loving gaze at the Terminator endoskeleton arm in Cyberdyne storage. GODDANG, MILES, DOES THAT THING LOOK FRIENDLY TO YOU?

3. T3: The moment in which the T-X’s testing of her wrist-mounted flamethrower does not start a forest fire big enough to burn down all of California before Judgment Day can even get there.

4. T3: His fate, whatever it is, is sealed offscreen, but three movies into this deal, Dr. Silberman — police station counselor in T1 and mental hospital captor to Sarah Connor in T2 — still doesn’t think the robots are real?

5. T3: John Connor burgling the vet clinic that employs the assistant vet he made out with in junior high? Assassin cyborgs, fine, but this is asking too much.

3. T2: Nintendo. “Not as cool as being paramilitary-homeschooled by your mom.”

4. T3: Budweiser. “The only beer fit to drop into a river of human skulls of your own imagination!”

The killing of the dog in T2. We’re supposed to understand that’s the dog from the first movie, right? The one warning Kyle and Sarah at the motel? That dog is really old. That dog has to be like, “Two days to retirement!” POOR FORM, ASSASSIN.

1. WHAT BECOMES OF SARAH CONNOR’S IGUANA? 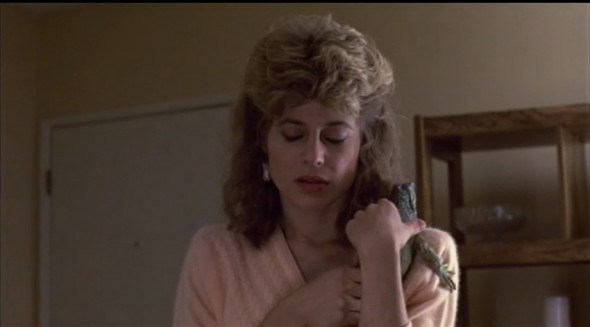 2. Sarah is recording tapes for her unborn child at the end of the first movie in a moving, open-top Jeep. In the fourth movie, the tapes are crystal clear. What kind of post-production audio training did she get while living off the grid?

4, Has the Terminator franchise’s greatest achievement to date been making an action hero out of a dude named Kyle?

5. Should the resistance maybe put the robot-sniffing dogs closer to the entrances of the bunkers? Like, you can build a society in an underground lair and carry out a guerrilla war from there but you can’t think of that? No wonder we’re being wiped out as a species.

The Terminator’s repeated insistence on the use of “cybernetic organism” over “robot” is quietly hilarious, not unlike your friend who insists on using “ancient grains” in casual conversation.

With the Fifth Terminator Movie Currently Unseen, Helpful Suggestions for the Future of the Franchise

1. There’s a giant hole in the big-screen Terminator timeline that has remained intact through four movies, and filmmakers diving into it would find plenty to chew on: the early days of the war against the machines! T3 kicks off the conflict. T4 picks up much later when, seemingly like the forthcoming Batman v Superman: Dawn of Justice, we’ve already skipped straight to JOHN CONNOR IS A FRAUD without seeing any of his early wartime adventures. How does John convince the survivors of a nuclear apocalypse that he’s in control? How do he and Kate finally fall in love? How does her transition from associate veterinarian to camp doctor go? Wouldn’t Skynet have the world’s repository of military knowledge at its disposal? How does one even begin to formulate a defense against that? This is all very interesting!

2. Failing that, you know what kind of would’ve made an amazing show? The Sarah Connor Chronicles are long gone, but what about John & Kate + The Human Race, a serialized drama about them building the resistance? How did they go about stringing together these ragtag bands of freedom fighters in the first place? The Stand and Battlestar Galactica say this can work.

3. Also insufficiently addressed, to date: the idea that the savior of the human race could end up just being the worst. “Did you call moi a dipshit?” asks Edward Furlong as young John Connor in T2, and the bodybuilder accusing him of dipshittery could not be more correct. What if the Terminator encountered a mission subject so profoundly irritating that it blew through its own programming and decided not to save its human? What if our entire species was wiped out due to the failure of one pissant kid to show proper respect to his robotic guardian?

4. The use of dogs to make sure people-appearing figures actually are people is a great possible side avenue for a more family-oriented spinoff. Make a movie just about the four-legged guardians, and then make a sequel with Terminator hounds sent back to battle man’s best friends! Here to help!

5. More immediately, and with whatever Terminator-adjacent idea is brought to the screen next: Stop setting things in the far future and stop setting them right now. Why? Oh, no reason.

No reason at all.

All My Heroes Are Fading: Thoughts on the Bad Boy Reunion at the BET Awards