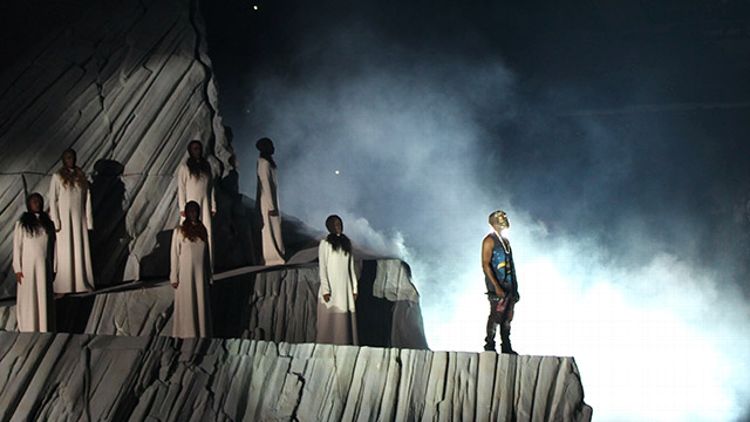 Everyone tells you about White Jesus, but nobody talks about the monster. For the first half of Kanye West’s two-hour-plus set Saturday night in Los Angeles, an abominable-goblin-esque beast with flashing red eyes lurked on the peak of the already thoroughly Instagrammed mountain that serves as the imposing centerpiece of the Yeezus tour. It would reappear and disappear for a few minutes at a time, seemingly without rhyme or reason, providing an elliptical footnote to whatever else transpired onstage. Unlike the headline-friendly Son of God, it never interacted with Kanye, never even got within close range of him, but it left a chilling impression, an almost too-literal shadow over a show that dared you to parse (or mock) the bombastic earnestness of its execution. The monster refused to let you get comfortable, ostensibly because Kanye’s not comfortable. Not that “comfort” was anywhere to be found on the multicourse tasting menu of West’s own psyche that he and his DONDA crew elaborately presented to us that evening.

The Yeezus show is long and physically and mentally exhausting, and I wouldn’t take out a minute of it. Even from my seat — which was close to the stage but suffered from less-than-ideal sound, I found myself absolutely rapt by everything that transpired on that mountain and the hydraulic Pride Rock that extended from it into the floor of Staples Center. Most of the people seated around me felt differently; as the hours wore on the seats neighboring mine slowly vacated, couple by couple, until I had the whole row to myself (save for the seats the college boys behind me had propped their feet up on for their fourth-quarter naps). Like the album that is its namesake, the show was relentless and abrasive, yet somehow lush in its severity. It had more in common with Gaspar Noé’s Enter the Void than hometown hero Kendrick Lamar’s tight, crowd-pleasing opening set.

The energy was high at the outset, as Kanye came out firing ear-splitting lasers with “On Sight” and 20,000 people sang along to its sweet, incongruous refrain — “He’ll give us what we need, it may not be what we want.” The church of Yeezus was open, palms were up, ready to receive his message. That message would be delivered through song, but also pantomime, informational slide show, and not one but two sermons.

And yes, also monsters. “Hold My Liquor” was the through line of the show, its ominous pulsing notes rearing their heads several times throughout the night as a series of projections of title cards bearing words like “RISING,” “FALLING,” and “SEARCHING” lit up over Mount Yeezus, delineating the acts of Kanye’s increasingly Wagnerian rap opera. It was a strange song to tease, especially as album standouts like “Black Skinhead” and “Blood on the Leaves” were dropped on us with little to no warning. When Kanye actually began the song in earnest, though, I knew why it had been so built up. Stage snow still swirling in the air from “Coldest Winter” morphed into a flurry on the big screen, and the monster returned. This performance was the emotional heart of the Yeezus show, and this time those red eyes glared down at Kanye for the whole song. 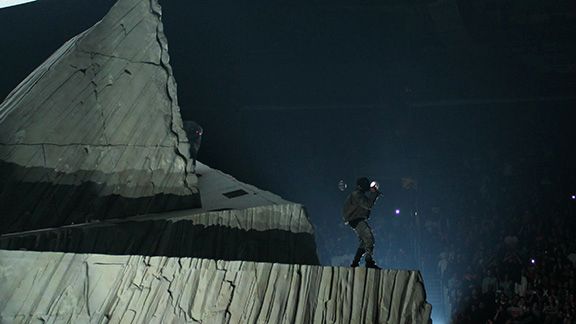 I totally cried during “Hold My Liquor.” I won’t say I don’t know why, because I do, and it was as much due to Kanye’s performance and presentation as what I brought to it. I described the experience later to a friend as “a useful cry,” and it’s the kind of moment I’m always looking for in any kind of experience with art and am always grateful to find.

I spent the next day reading a website for a book I want to read, which I was led to from a quote I had read on Tumblr, because that’s how discovery works these days. It’s a new one from philosopher Alain de Botton and John Armstrong, entitled Art As Therapy. De Botton’s last book, Religion for Atheists, argued for the virtues of the structure of religions and proposed a few ideas for how they could be applied to the lives of nonbelievers, particularly our experience with art. Art As Therapy, from what I’ve gleaned so far, takes that a step further toward actual practice, and the website offers a series of secular meditations on a variety of paintings and photographs. De Botton has positioned himself against contemporary art’s veneration for pure aesthetic; he believes art should aim to make us better, more aware people. This excerpt is paired with Jeff Wall’s Untangling on the website:

We are not transparent to ourselves. We have intuitions, suspicions, hunches, vague musings and strangely mixed emotions — all of which resist simple definitions.

Then, from time to time, we encounter works of art that seem to latch onto something we have felt, but never clearly recognised before. Alexander Pope identified a central function of poetry: to take thoughts that we experience as half-formed and give them clear expression or in his words, something ‘was often thought, but never so well expressed.’ In art a fugitive and elusive part of our own thinking and experience can be taken up, edited, and returned to us better than it was before so that we feel, at last, that we know ourselves more clearly.

This may all seem like a giant digression, but I think it helps to illustrate what I found to be so fascinating, so “useful” about my evening with Yeezus. It’s why it’s hard for me to just dismiss him as a ranting egomaniac, which of course he also is. Sometimes a person opens up their brain to you in a way that clarifies parts of your own, even if the two have very little in common at first glance. What makes the Yeezus tour so singular is the scale at which it does that; there’s something gloriously improbable about someone getting to a level in their career where they can charge $120 per seat to share an unedited slice of their narcissism, neuroses, fears, and passionate beliefs with a stadium full of people in the form of a big-budget work of performance art. Kanye isn’t trying to be all things to all people, unlike the last person I saw at this venue, and that kind of specificity creates an experience akin to falling Tetris pieces, some pieces landing more harmoniously on some people than others, some people more in need of certain pieces than others. Which is why I can’t judge everyone who could not sustain the patience for Kanye’s Auto-Tuned speechifying — my rational brain was ready for bed, too.

But I’m always open to learn things during a Kanye West experience — not to be taught necessarily, but to go through some shit by proxy. My Beautiful Dark Twisted Fantasy came out during a time in my life when I desperately needed someone with a big, loud pulpit to roll up his or her sleeves and dig into a state of mind most people would call dysfunctional. Like everyone else, I had that album on repeat for a few months there, and paired with Sufjan Stevens’s willfully difficult musical breakdown The Age of Adz it was extremely helpful to me in late 2010 — actually practically helpful, like scissors or a banking app. (The two albums are similar in some fun ways; Kanye started resisting demand for dance tracks about the same time Sufjan stopped wanting to make twee orchestrations about the United States.) Kanye made his honest thoughts available to me, which I was thankful for not because they were the same as mine, but because they gave me something off of which I could bounce mine.

In what seemed like counterprogramming for that candor for which he is well-known, Kanye wore a series of full face masks throughout the evening — including a disco-ball-like one for “Stronger” that created a stunning effect under a wall of lasers — and did not actually reveal his face until just before his meeting with Jesus near the end of the show. He performed the remaining songs — “Jesus Walks”, “Flashing Lights,” and “All of the Lights” — as regular old Kanye, in a sweatshirt and sneakers. People woke up from their naps and leaped to their feet, suddenly reminded that we were in the presence of the no. 1 rock star on the planet and he was playing all the hits. But before the finale he had one more message to deliver. It was classic Kanye, but somehow seeing it play out in person was both more poignant and funnier than it would have under a “Kanye’s Latest Crazy Rant” headline on TMZ.

When I say “I am a god” … the reason I say that is, there’s a lot of other songs, especially in rap, that would have you calling yourself something other than a god, right? But in this world, where everyone is ran by fuckin’ brands and products and slave mentality, I wanted y’all to say that in the first person. When y’all on your way to work to deal with y’all’s boss, when y’all on your way to an interview, when y’all jogging, I wanted you to all feel that type of power, that “I am a god,” ’cause Yeezus is that sonic cocaine. Every time you feel like you can’t do something, just take a small 10 percent of the level of confidence that I got every motherfuckin’ day.

It’s considered gauche these days for an artist to state their intentions, and yet here Kanye is giving us specific instructions for what to do with his music and the feeling we get when we listen to it. It’s crazy brash, especially since I don’t believe Kanye believes he is a god every motherfuckin’ day, otherwise his music wouldn’t be half as interesting as it is. Earlier in the monologue he reiterated his desire to create “on a Disney level, on an Apple” level, which was met with both cheers and snickers. But by calling out that process of energy transference he managed to unite those of us who stayed to the end — the crowd erupted in applause after that speech, because we were all thinking the same thing — Yes! That is how I use music! And we looked around and realized we all had something in common with each other. And that was useful. 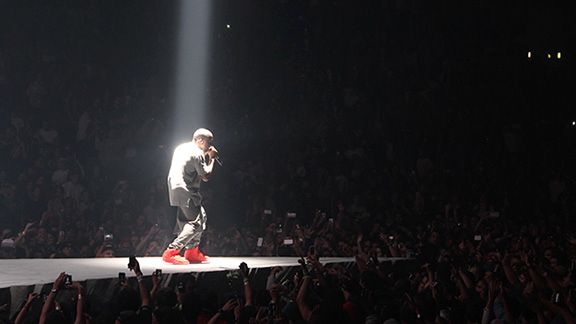 Filed Under: Kanye West, Kendrick Lamar, We Went there