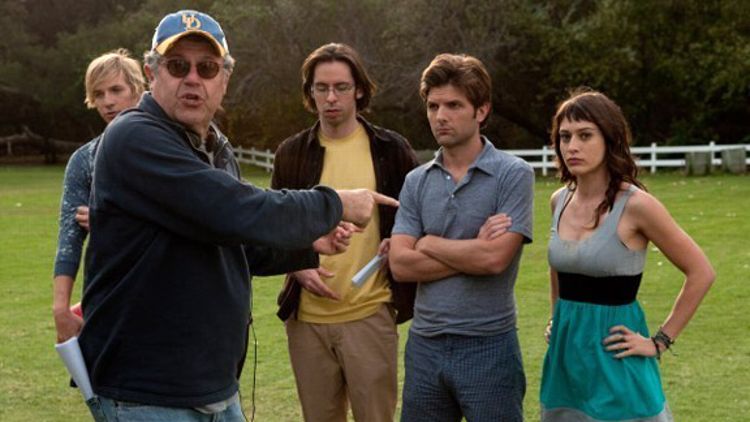 A visit to Pawnee City Hall yesterday –- conveniently located in the palm tree filled San Fernando Valley –- provided many memorable moments, including Rob Lowe talking to a dog, Rashida Jones suffering through an epic post-Watch The Throne tour hangover and the incongruous sight of Chris Pratt nose-deep in a 500 page book. But while most of the details will be saved until for a longer Parks & Recreation story, coming next month, one bit of news did emerge: the Party Down movie may be closer than you think.

In between takes on a freezing Southern California morning -– really! –- Adam Scott revealed more details on the big-screen reincarnation of the culty catering comedy. “We have a treatment,” he said, “and if everyone’s schedules work out, we’ll shoot it over the summer.” This info comes on the heels of a previous relevation that the film had a production company lined up and was only waiting on the go-ahead from Starz. Still, two years from cancellation to cinematic rebirth is a timeline that should embarrass even the most patient of Bluth fans and give hope to anxious Greendale Human Beings. With visions of pink bowties dancing in our heads, we cautioned Scott about the one thing that could still derail the project: Michael Cera. He said there was no chance of that happening, before deadpanning. “At least I hope not.”

We Found It on Watch Instantly: Emmanuelle Chriqui in Waltzing Anna