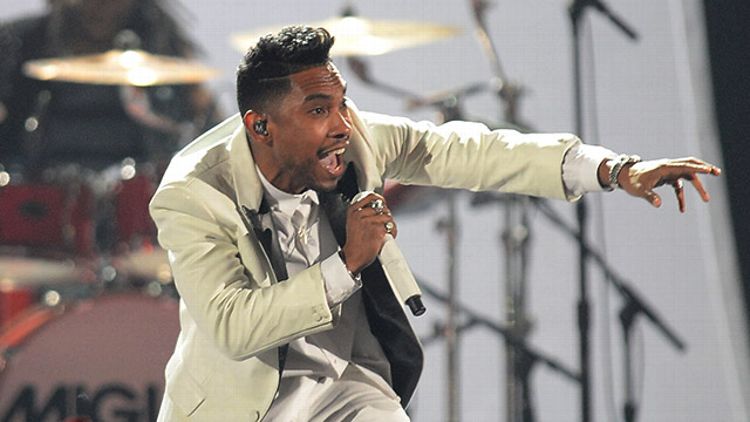 The Billboard Music Awards took place last night in Las Vegas. The MGM Grand Garden Arena was filled to the brim with stars, from America’s Taylor Swift to Canada’s Justi —

OK. So here’s the background to the only important thing that happened last night in America. (Sorry if you were expecting a roundup of the awards show.)

Singer Miguel performed his 2012 staple “Adorn.” The performance started out like most Miguel-related things do: high energy, off-the-charts sensuality, incredible vocals, and dance moves that are usually a mix of James Brown, Prince, and Randy Watson.

Two minutes and 57 seconds in, however, Miguel decided to take his already-outstanding performance to the next level. A new level. A DANGEROUS LEVEL. Right before it was time to make the figurative leap of faith into literal leap-of-faith territory, he had a flashback to his childhood.

And just like that, he went for it, “it” meaning less landing an acrobatic move and more leg dropping in the face of a Billboard Music Awards attendee name Khyati.

[No Khyatis were seriously injured in this magical, looping clip]

I agree, thank goodness Khyati (presumably pronounced “Kay-why-ate-ee” or “Katie”) is not hurt, but let’s be honest about the situation. The big winner here is Khyati.

Two minutes and 57 seconds into Miguel’s performance was the best moment of Khyati’s life. I sprained my ankle yesterday playing flag football and all I have to show for it is a fat foot sitting atop an ice-cold handle of Tortilla Gold. Khyati?

WHAT’S IN THE BAG, KHYATI, 1 MILLION FROZEN DOLLARS TO TREAT THE BOO-BOO AND/OR COMPENSATION FOR NOT SUING MIGUEL FOR THAT KALEIDOSCOPE NIGHTMARE LEAP?

Sorry. I’m just jealous. Because life is all about stories, and Khyati has perhaps the greatest one of all.

Also, in case you were wondering, this was not the end of the performance. There were still roughly 30 seconds left in the song, and Miguel did not spend that time tending to Khyati. Because he’s a rock star, something Khyati should have prepared herself for when she rudely threw her face into Miguel’s parkour recital.