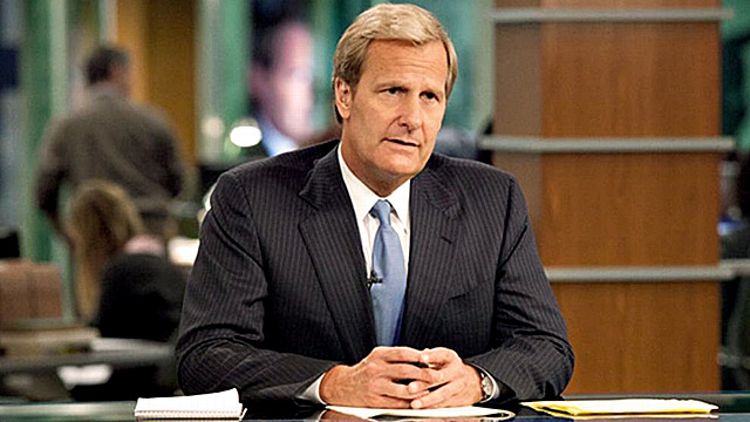 HBO has taken us to some fanciful places during its recent ratings resurgence, from the vampire-blood-stained bayou of True Blood to the violent kingdom of Westeros on Game of Thrones. But in terms of pure fantasy, neither holds a candle to The Newsroom, the new series from writer Aaron Sorkin and producer Scott Rudin. Although the program — which focuses on the backstage shenanigans at a popular cable news show — is ostensibly set in the real world, the true backdrop is one that should be familiar to fans of The West Wing (not to mention survivors of Studio 60). It’s pure Sorkinstan, an overwritten utopia where all names are alliterative, all dialogue is charged, and the call sheet runs wild with all manner of mythical creatures, including the Liberal Republican, the Gun-Toting Manhattan Lefty, and a preponderance of Twentysomethings Who Reference Musicals. But the biggest flight of fancy here is the one Sorkin seems most invested in: that television audiences are desperate not only to relive recent history, but to watch him attempt to pompously rewrite it.

Sunday’s pilot, briskly directed by film vet Greg Mottola, opens with Jeff Daniels’s Will McAvoy caught in the middle of a political argument. Buffeted by histrionics from the left and the right, the unflappable McAvoy — who, we’re told, is the blandly appealing “Jay Leno” of anchors — finally flaps when confronted with the milquetoast questioning from a blonde coed (this will be a theme: Nothing gets McAvoy’s dander up faster than a woman who disagrees with him) who wonders why the United States “is the greatest country in the world.”

Unlike the savvy game players on both sides of the red-blue divide, Will unloads till he’s purple in the face, earning a media firestorm and an enforced three-week vacation in the tropics with, we’re told, Erin Andrews. (Again: On this show, unicorns are real.) Thus freed from his even-handed reputation and encouraged by his bourbon-addled boss (Sam Waterston, who actually seems to be cringing from his performance as he’s giving it), McAvoy is reborn as the sort of obnoxious, Olbermann-ish truth teller Sorkin is convinced this country needs — constantly asserting the importance of a “well-informed electorate” and bravely spearheading a return to a time when, contra the offending question, America was tops. Those days were great, Will sputters, because “we were informed by great men, men who were revered.” Men, in other words, just like Will McAvoy and Aaron Sorkin.

Leaving aside the fact that the left-leaning-but-Republican-registered McAvoy is the sort of rampaging ego monster who is born, not made — it’s simply not plausible that he was able to keep his explosive vanity in check until just this moment — this false nostalgia is the central rot at the core of The Newsroom. The flag-waving naval-gazing of rich white men is nearly always specious, whether it’s in the campaign literature of a family-values congressional candidate or in the blinkered “can’t we all get along?” memory of a Malibu liberal. Other than a stern paterfamilias like Murrow or Cronkite telling a captive, pre-cable audience what’s what, I remain curious as to which aspects of America’s past Will is pining for in particular. Segregation? Child labor? Hobos? Certainly not McCarthyism, which is mentioned with enough frequency to inspire a drinking game. But it doesn’t end there; Sorkin has cleverly structured the entire series as a self-congratulatory rear-view mirror. By setting Will’s rebirth in 2010, it provides ample opportunity for him to right all of the political and cultural wrongs of the past two years. Well, not right them so much as be right about them, passive-aggressively scolding the audience for lacking his deep foresight.

And so it is in the pilot that Will’s team immediately recognizes the environmental gravity of the Deepwater Horizon oil rig disaster, sagely connecting it to both Halliburton and a general trend toward deregulation during the Bush years. It’s Will alone who tracks the precipitous, big-money-fueled rise of the tea party (taking credit for actual work done by Jane Mayer of The New Yorker, among others), and, on election night, only wise Will sees the looming budget battle over the debt ceiling.

If you’re politically inclined to agree with what Will’s doing — guilty! — it’s hard not to get a little thrill out of this spectacle, but it’s a hollow high. What fun is cheering for a Monday-morning quarterback? And sure, I responded to the dazzling, climactic newscast in the pilot because I’m human and thus as vulnerable to a well-orchestrated montage of Good People Doing Good Work as the next guy. (The soaring piano score, which somehow suggests a less cynical Vangelis, didn’t hurt either.) But by the time Episode 4 rolled around and the News Night crew were courageously refusing to erroneously report on Gabrielle Giffords’s presumed death to the mawkish sounds of Coldplay (and casually smearing actual, IRL journalists at NBC and NPR for failing to do the same), I was retching. Despite what The Newsroom would have us believe, it requires no bravery to stand athwart history yelling “I told you so.”

None of this bluster serves the perpetually game crew of performers, most of whom, like their stressball characters, are doing their best in trying circumstances. Daniels is charismatic even when he’s being cruel, and stage star John Gallagher Jr., as harried young producer Jim Harper, makes for a fine, fresh-faced foil. But in a worrying trend that dates back to Studio 60, Sorkin once again forgot to install the personality chips in his morality bots before letting them off the showroom floor. The denizens of ACN aren’t so much people as they are position papers, earnest talking points in rumpled oxfords. (It’s telling that in this GQ piece, Sorkin refers to McAvoy’s opening speech, in which he bludgeons an audience to death with infant mortality rates, as proof that his avatar is “exceptional.”) The Newsroom’s lone African American male, Gary, is actually referred to as “the smart black guy willing to criticize Obama.” As if this shorthand wasn’t enough, Gary spends the rest of the hour doing just that with Kendra, the only African American woman in sight. (Gary is played by Chris Chalk, recognizable from his role as a sleeper terrorist on Homeland. Is it wrong that I spent much of the later episodes wishing he would go postal?)

All this hearkening back to a male-dominated golden age can occasionally make The Newsroom feel like fevered Ron Burgundy fan fic. (“I love reading the news!” McAvoy brays over post-election whiskeys. His jazz flute stays mercifully sheathed.) There’s a deep strain of misogyny to the show that makes even Sorkin’s trademark banter run sour. The delightful Emily Mortimer is inspired casting as Mackenzie MacHale (!), Will’s former paramour brought in to transform his show and spar inappropriately with him in the control room; few actresses are able to pivot so easily from puppy dog to pit bull. Which makes it so disheartening to see her betrayed by the scripts: Mackenzie is introduced as a woman returning from years of dignified reporting from a war zone; by the third hour she’s having a nervous breakdown over Will’s dating life and clumsily sending lovesick e-mails to the entire office. And I hope HBO’s HR department investigates just what is going on with Alison Pill. One of the strongest young actresses alive is, in Sorkin’s hands, reduced to pratfalling and flopsweating over two unworthy suitors. On camera, Will McAvoy’s responsibility is informing the electorate; off of it, it’s keeping flighty, deluded women in line — and away from their BlackBerrys; typing is hard!

But ultimately, no one appears more deluded than Sorkin. His Will McAvoy is an insufferable blowhard, but the show spends most of its energy trying to convince us he’s a saint. “Will is an extraordinary man with a heart the size of a Range Rover!” Mortimer chirps about the dude who just took a $3 million pay cut to show her up. A parade of equally fine actresses appear to be similarly judged and scolded: Kathryn Hahn as a pistol-packing loon, Hope Davis as a reputation-smearing jezebel. “I’m on a mission to civilize,” McAvoy announces, and the line is played straight.

It’s too bad: There’s a place for a show about a captivating jerk, an unlovable genius whose public skills are constantly eroded by his private flaws. And the triumph of The Social Network proved what Sorkin is capable of when he doesn’t smother his hero in admiration, twisting the knife instead of patting himself on the back. But despite Will’s odious behavior (when a blind date confesses a love of reality TV he calls her a “bitch”), the anchor is presented as our savior, not a sinner. Like his creator, McAvoy is a self-sacrificing truth teller who violently tosses a tabloid off his desk in order to teach us what’s really important: him. “Be the integrity!” Mortimer enthuses, as McAvoy repairs to his multimillion-dollar Fortress of Solitude and looks down upon the poor huddled masses it is his sacred duty to improve. At one point, in the midst of the lecturing, a Newsroom character has a rare moment of self-awareness: “No one wants to watch a classroom. They’ll either be bored or infuriated.”