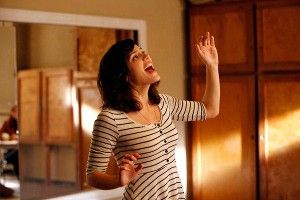 Say you’re a fairly literate pop-culture person that’s, somehow — for no particular reason — avoided watching even one second of Smash. You’d probably know the rough outline of its trajectory: that it’s on NBC, that it’s a sing-along drama about the staging of a Broadway musical, and that it’s been picked over like crazy since it premiered last year. You might know that, for its second season, original showrunner Theresa Rebeck got the boot in favor of new blood, ex-Gossip Girl’er Josh Safran, and that NBC made a lot of noise about the new and improved Smash. You might even know that, before it changed course, it birthed a populist hate-watching phenomenon. You probably wouldn’t know the whole thing was originally Steven Spielberg’s idea, and that he’s been meddling in the process along the way, and that, eventually, the bad news ran all the way up the flagpole to Stevie himself. (He was nonplussed: “I can either watch all the dailies or I can follow the social media. I can’t do both.” Get ’em, Stevie.) What you’d definitely know: The show used to have a lot of characters in scarves, or maybe just one character wearing a lot of scarves, or maybe anthropomorphic scarves providing voiceover narration and the occasional song-and-dance bit. In its new iteration it has less scarves, and possibly even no scarves. None of which, ultimately, mattered.

Smash 2.0 premiered Tuesday night, and it did terribly. THR says: “The musical drama returned with a two-hour sophomore premiere … averaging just a 1.1 rating with adults 18-49 and 4.47 million viewers. Although it obviously benefited from Super Bowl buzz and a strong lead-in from The Voice during its original launch, Tuesday night still marks a 71 percent drop from its premiere’s 3.8 adults rating. Notably, the last half-hour of the Smash premiere, starting at 10:30 p.m., fell to a 1.0 rating in the demo.” Yikes.

Anyway — congrats, Theresa Rebeck. You probably will not be remembered as the person who failed during the first season of Smash, but only as one of several people who failed throughout the course of the existence of Smash. And, sorry, Josh Safran. You probably aren’t the savior NBC so badly lusted after.

Overplayed Song of the Week: Taylor Swift, 'I Knew You Were Trouble'