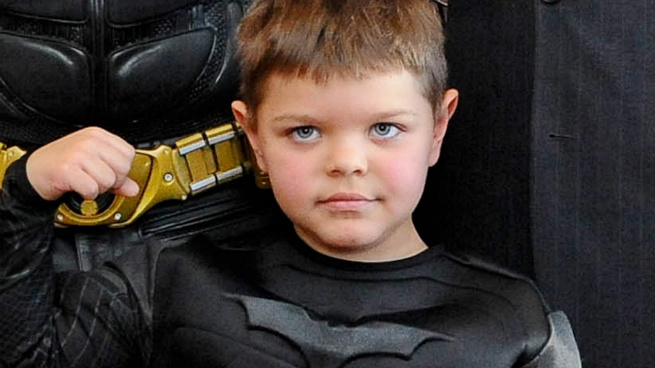 Hollywood is pretty mean sometimes, but daaaaamn, the industry sure outdid itself when it cut a 5-year-old’s scheduled appearance from the Oscars ceremony. What a bunch of jokers.

Miles Scott, whom you may remember as the “Batkid” who went on a series of crime-fighting adventures in San Francisco last fall as a gift from the Make-a-Wish foundation, was invited by the Academy to appear at the awards last weekend. Miles (who had completed treatments for leukemia before embarking on his San Francisco bat tour) and his family traveled to Los Angeles from Northern California for the event. On Saturday, he rehearsed his bit with Andrew Garfield, but the segment was cut from Sunday’s broadcast. Garfield was conspicuously absent from the show (as was his girlfriend, Emma Stone), maybe because he was busy crying at the injustice of screwing over a kid who’s still probably getting the hang of tying his own shoes. (Actually, it was probably something else, hopefully nothing more serious than #TearsForBatkid.)

“Insiders” told The Hollywood Reporter that the segment “wasn’t coming together as originally envisioned,” but the Academy hasn’t offered much information (publicly, or to the Scott family) beyond telling THR that the bit didn’t make it to air “because of the fluid nature of live TV production,” which I’m sure would pacify any kindergartner. It gets sadder, though: Miles was scheduled to close out a hero-themed montage by appearing onstage after an introduction from Garfield dubbing him “the world’s next superhero.” Mashable is happy to provide you a photo of Miles in rehearsal, standing in front of the illuminated word “Batkid,” if you want to further lower your current mood. He “had a fancy tux and was all ready for [the show],” and was preparing his loose teeth accordingly.

The Academy paid for Miles to go to Disneyland as a consolation prize, and according to his mother, he enjoyed himself on his trip. But justice must be served. Bruce Wayne wouldn’t want it any other way: Academy of Motion Picture Arts and Sciences, you owe Miles Scott the street-legal Batmobile. I don’t know how any of you can sleep at night until there’s a little boy in a tuxedo using Batman’s Tumbler as his bunk bed. It’s the very least we (actually just you, Academy, because it costs a million dollars) can do.

Sean Penn and Charlize Theron's After-Party PDA ... and Other Oscar Travesties From This Week's Tabloids