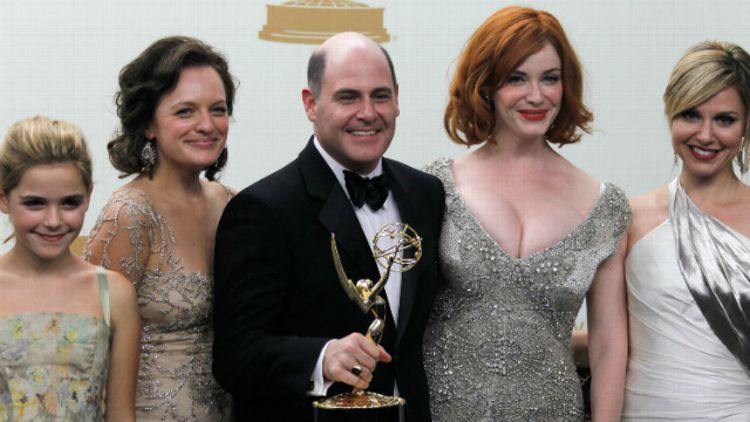 It turns out, the most important line from the Season 6 premiere of Mad Men wasn’t a quote from Dante and it wasn’t Roger’s self-pitying spiel about doorways. It was Don’s postcoital admission to Sylvia that he doesn’t “want to do this anymore.” But all these years on Madison Avenue have taught us that wants and needs are two very different, often contradictory impulses. And so what followed was 10 hours of the once (and future?) Dick Whitman continuing to do the very same destructive things he’d been doing, including boozing, floozing, and detonating professional and personal relationships like he was trying out for the Weathermen (though — Season 7 spoiler alert! — that particular radical organization wouldn’t form until 1969) without a modicum of happiness, joy, or desire. Mercifully, in last night’s season finale, Don appeared to get what he claimed he wanted via an express elevator headed straight to the bottom. And, unlike Season 4’s drunken nadir, this time there wasn’t a quick fix of daily swims and emo journaling to help cushion the fall.

One of the things that makes Matthew Weiner the best writer working in television today is his refusal to sugar the pill and make life easier for his protagonists. I suppose, then, that it’s admirable he did the same for his devoted audience this year. Despite some adrenaline-ass-injection highs, Mad Men Season 6 was a tough watch. And while I liked where last night left us — strangely, Don’s sudden, precipitous descent hinted at a potential happy ending that I never would have predicted for him even a week ago — the road there was bumpier than a flight in Ted Chaough’s Cessna. I’ve already written at length about my frustrations with Season 6; suffice it to say that last night felt very much of a piece with what had come before. There was history repeating itself (Pete’s mother dying in the same sea his father crashed into years before), there was the impossibility of re-creating happiness (California can’t be Don and Megan’s happy place), there was a sports car stuck in reverse.

In the end, the most useful mirror was the one Don finally seemed to catch sight of, the one that showed how badly his behavior reflected on everyone he cared about and the identity he’d worked so hard to create. I’m pleased and hopeful that Mad Men‘s concluding season will be about the one story it has thus far managed to avoid: Dick Whitman beginning to confront who he really is. Maybe, by the end of the run, our hero will be more like his beloved Hershey bar and the wrapping will match the insides. In other words, Don Draper will no longer have to advertise.

If I were a sportswriter in 1968 (or, hell, 2008), I would go with my gut and pick Stan Rizzo. Like a scrappy, undersize shortstop, the jolly beardo made everyone around him better this year: making Ginsberg laugh, making Peggy flirt, and making Don, for a brief moment, chill the fuck out. In an office full of self-loathing, self-invented schemers, Stan seems to be the only one happy in his own densely pelted skin. Without him around to lighten the mood, Season 6 would have been impossibly dark. (Though he’s not all laughs: It was his spark of ambition that last night led to Don’s very public flameout.) My favorite moment of the year remains his midnight-oil phone call with Peggy, which glowed with an easy warmth and intimacy that no “real” relationship on the show has ever matched.

But modern statheads would crucify me for the pick, since Stan’s relatively low playing time more or less disqualifies him from consideration. So, instead, I’ll pick his platonic scene partner, Peggy. Outside of stabbing her boyfriend, pining for her boss, and, in the end, boiling over with frustration, the firm’s new de facto chief creative didn’t have much to do this year. But, from the pilot until now, her arc remains the most dependable, the most inspiring, and the most true. (Elisabeth Moss’s peerless, unshowy performance helps too.) In a circular year, Peggy was the one character who kept moving forward even as circumstances kept dragging her back.

Don Draper. Well, OK. This is almost definitely a lie, considering Don remains one of the most compelling characters in television history, Jon Hamm’s performance this season rose to unparalleled heights of ego-free subtlety, and Mad Men, as a show, wouldn’t exist without the peregrinations of its lead, no matter how much they may seem like tooling around a cul-de-sac. But there’s no denying that Don was a colossal downer this year, destroying others in a futile, kamikaze-like blitz to avoid dealing with his own internal wreckage. Others have pointed out the similarities between Don and Mia Farrow’s character of Rosemary in Peggy’s favorite movie. But to my mind he was exactly like Rosemary’s baby: a squawling emotional infant who demanded everything and, when he wasn’t happy with the results, revealed himself to be kind of a devil. My issue isn’t with Don’s challenging unlikability, it’s that we’d seen him do many of these unlikable things before in more compelling ways, from exploding the agency to blowing up a marriage. Don this season was a blunt object, too opaque to suggest much depth, too hard to evince much sympathy.

Last night, the Hershey’s monologue — and subsequent confession — was fascinating, electrifying TV. But it came out of nowhere. (And if you think it came out of the flashbacks, well, then we’re both right.) Yes, you could argue it’s been brewing since Season 1, but his breakdown over a never-before-mentioned candy bar felt necessary, not natural. But look: Matt Weiner usually doesn’t take shortcuts with these people, and regardless of how we got here, I’m much happier with the destination than I was along the way. (And, as I said above, Don finally letting go of his Don-ness and letting the old Dick out — sorry — suggests the possibility of a much more upbeat finale next year than I ever would have guessed.) Seeing the partners — our TV friends, but, as we realized, certainly not Don’s — kick their onetime meal ticket to the curb was more upsetting than any shattered marriage or incidental heartbreak. (And, like Hershey’s, it felt both rushed and overdue. We’ve seen him skate away from any and all consequences for years.) But I think it’s for the best. I’m tired of Don Draper, the chameleonic Experiencer of Things. After a down (way down!) season, it’s time for him to get off the sideline and back in the game.

When Harry Hamlin showed up as Jim Cutler, wearing tortoiseshell glasses and an oddly spacey expression that suggested either higher consciousness or profound constipation, it was easy to assume it was a onetime gag. Matt Weiner loves to repurpose and complicate familiar TV faces — remember what he did to poor Rory Gilmore last year? — and taking a man famous for playing the Don Draper of the ’80s and turning him into a stentorian nerd seemed like a move so inside baseball it was coming from within the clubhouse showers. But both Hamlin and Cutler surprised and, after last night’s turtlenecked power move, both seem like fixtures. On Mad Men it’s usually those striving for stature who are the most dangerous (see Benson, Bob). The creepy, drug-injecting Cutler’s utter lack of flappability — and backstory — makes him the wildest card as we head into the home stretch.

I can’t believe I’m saying this, but: Betty Draper. While Don was spiraling, his former wife was in ascendance, dropping the Bugles and reclaiming her mojo. But it wasn’t the (short-lived) hair-dyeing or waist-slimming that did it. More than anything, it was a pleasure to see January Jones given a chance to play Betty as something other than a Yeti in a housecoat, a frozen monster terrorizing anyone in her path. Her scenes with Don this year were among the warmest in an otherwise chilly season and a helpful reminder that nuance flows through Mad Men more plentifully than gin. One of the secret strengths of Year 6 was the way we were forced to admit that maybe Don’s POV wasn’t really all that trustworthy: Ted wasn’t an empty suit and Betty wasn’t always to blame. I like the former Drapers as flirty peers and grudging friends much more than I ever did as slick marrieds or sniping enemies. It’s a tribute to the depth of this show that a character can make a 180 like this — and a credit to both Weiner and Jones’s patience that she was given the time and attention to pull it off.

Ties are unprecedented, but (a) these are my totally subjective awards, and (b) I’ve never really done them before. So I’m giving this to last year’s trio of promising usurpers: Megan, Ginsberg, and Dawn. In the fifth season, the gravest — and most exciting — threat to Mad Men‘s status quo was the arrival of these three aliens, who, thanks to differences in age, religion, and race, made our main characters seem fustier than one of Roger Sterling’s Kentucky Derby parties. But, as ever, the only real threat to Don Draper is Don Draper himself. And so these three fascinating characters were exiled to the remainder bin. Ginsberg was given a few paltry anxiety attacks in the background (and one sweet night on the town). Dawn continued a slide into tokenism that actually makes sense for the show (it’d be worse if she was magically promoted past plausibility) but still feels frustrating; the scant scenes with her sister (?) that bookended the King assassination were particularly unsatisfying. And the writers’ interest in Megan seems to wax and wane along with Don’s. Her transformation into a successful faker at work and a clueless cuckold at home was limp. A year ago, she was the Martian that upended Don Draper’s universe; this season she was little more than Laika, the Cosmonaut pup left to float in space forever.

I get the thinking behind Weiner’s decision-making: It was more effective to show Mad Men‘s core characters backtracking into old behavior, and the marginalization of the new people, and the opportunities they represented, was part and parcel to that. But would it have hurt to at least let one of these new dogs get tricked up by an old mistake? I guess the point of Mad Men‘s sixth season was that there’s no escaping ourselves, that uncomfortable truths can’t be drowned in whiskey or covered with lipstick, that fresh starts are impossible. But fresh blood? That would have been awfully welcome.

And, because it’s 1968 — and, sadly, it’ll be 2014 before we see these people again — we’ll end with some nontraditional categories:

No, You Have to Pick One

The extra one bought by Bob Benson.

Runners-up: The one Don spiked with Canadian Club; the self-satisfied one enjoyed by a postcoital Betty at Bobby’s summer camp.

Runners-up: The penetrating, all-seeing stare of a betrayed ex-wife who always knew exactly who you were, Peter Campbell, and it’s just a shame that it took you this long to figure it out; New York.

Best Use of History