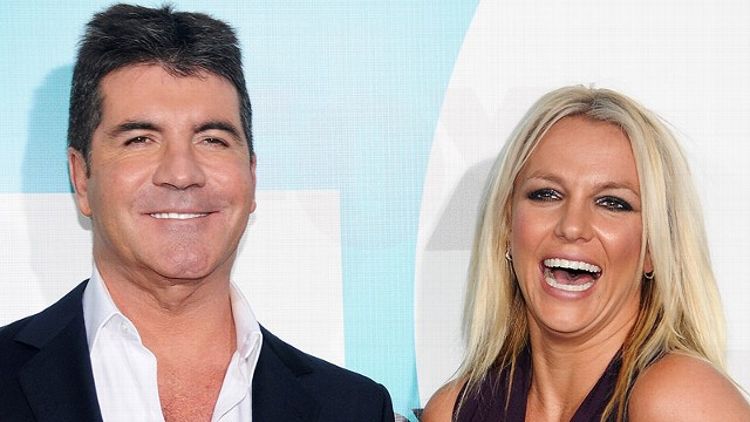 Will Britney Survive on The X Factor? “It’s going to be so much fun,” said a “clearly uncomfortable Spears” as she took the stage at Fox’s upfronts to announce her participation as a judge in the new season of The X Factor. “Doing X Factor may lead her back into meltdown territory. She gets extremely nervous and anxious. She’s hard on herself and not very confident.” Even a positive event like her engagement to Jason Trawick can “input as stress. This is a lot of change all at once for Britney. She’s coming undone.” While her last two albums went platinum, friends say she is not fully recovered from the 2008 mental breakdown that ended with a psych ward stay. “She really is starting to seem loopy and not right. She is so happy one minute and crying the next. Her emotions are fragile.” At a friend’s Brentwood crawfish boil, Spears ignored partygoers while “muttering obscenities by herself.” She hung out by the food table, saying, “Fuck it, I’m eating whatever I want. I don’t care.” Being the world’s most famous teenage pop star may have had some unforeseen longer-term ill effects. “Everyone she needs to see comes to the house. She gets her hair done or spray-tans at home. She is definitely lonely and doesn’t have friends.” A million sad smiley faces. X-Factor may exploit the curiosity factor. “The show needs a bankable pop star who will get viewers watching, whether they think she’s ridiculous or they love her.”

Miley Cyrus: “Dude, I shop at the best heel stores.”

Kim Zolciak: “If I’m craving a particular food, I’ll send a photo of what I want to my housekeeper while she’s at the store.”


Would John Mayer Do The Bachelor? “Ultimately, I’d say no. But I would just have to take the meeting.”

Jackie Chan: “I will ask my body how long I can go. I tell you, I am not young anymore.”

Misc/Etc: “chose mint” “butterflies on their stomachs!” “it was a diamond-encrusted bullet!” “they’ve got dancers, graphics, lights” “a microscopic love note” “I need a fucking vacation” “I am horrified by what I saw” “lunch for sovereign monarchs” “what a real butt feels like” “cooed to a quokka” “Blake Lively and Ryan Reynolds browsing at Anthropologie” “pieces of vegan birthday cake” “wasted and crawling to the ladies’ room” “inspirational angel” “sampled Tell’s eggs” “I still have moments where I can’t believe I’m married!” “since I’ve become an actor I drink less beer because it bloats my face.” “I’m a bit of a masochist.” “dip ourselves in honey and run” “curl a lamp” “I helped design some assless chaps”

Bravo’s Bethenny’s Divorce Crisis: “Fights over business, an anemic sex life and fuming walkouts” are a few of the problems plaguing Bethenny Frankel’s marriage to Jason Hoppy. Frankel was quoted on her show saying “Jason’s penis has cobwebs on it.” Bethenny’s mom, who apparently has no filter, says, “I called that before their wedding day. I said as soon as their daughter is old enough for preschool they would break up. This was dead in the water before it began. His problem is he’s too nice, and she’ll grab another nice one. He is replaceable. Nice is boring, and Bethenny gets bored with nice.” Frankel’s Skinnygirl empire is worth over a hundred million. Her mom seriously can’t stop talking: “Bethenny cheated on her first husband after her first couple of months of marriage. She doesn’t have any respect for marriage because she has never seen good marriages. Her great-grandmother has been married four times, her grandmother has been married three times, I have been married four times, so how could she?” Frankel may or may not already be knocking ski boots with her business partner Matt Hesse.

Jeremy Renner: At the Chateau Marmont, “Jeremy was too drunk for his own good.” A “wasted” Renner spilled a drink on his pants and kept saying, “My balls are wet.”

Katy Perry Dumped Again: Her romance with Florence and the Machine’s Robert Ackroyd cooled off after Coachella. “Robert is a notorious player. For him, Katy was just a random hookup. He was never pursuing anything serious with her.” At least the next Katy Perry album will be awesome.

Six-Year-Old Suri Cruise Wears Makeup: “Tom and Katie make no differentiation between what’s appropriate behavior for a child versus an adult. Little girls who play with makeup at home pretending to be like mommy are very different from Suri. She’s allowed to be a grown-up and allowed to choose what she wants to do. I find it difficult to support those choices and not putting any boundaries on your child.” YOLO.

Misc/Etc: “a skimpy white tuxedo jacket” “thanked her throngs” “pint-size high heels” “what a showman!” “what’s French for ‘rebound’?” “as gaunt as the models” “crystal droplets” “a pair of sizable implants” “get dumped later for a younger woman” “The It Girl” “say what you will about what a witch she can be” “at 49, he’s old enough to pull off a Mad Men hat” “the Boston beefcake” “her very naked son” “sexy ocean creature?” “a hippie cowgirl?” “Proud of yourself America?” “stole her juicebox” “I finally have the body I wished for when I was at the Playboy mansion” “a strip-club themed man cave”

Angelina Jolie and Billy Bob Thornton: “The world would certainly be a hell of a lot more dull if that man weren’t in it,” Angie writes in the foreword to Billy Bob’s book. Billy Bob says of Jolie, “We were close, but I always thought I was sort of Quasimodo or the Phantom of the Opera, and when I was with her I think that really reached its heights.” Thornton feels he botched the relationship with his own insecurities. “At some point, if you believe somebody’s too good for you, you’re going to mess it up.”

Jessica Simpson’s Upcoming Wedding: “Jessica would rather be an unwed mother than a fat bride.” Horrible everything, world.

Sharon Stone: “I’ve reached this period in my life when I feel particularly feminine.”‘ You should call Suri Cruise and go clubbing together!

Rihanna: “U know life is great when u wake up at 9 a.m. DRUNK!” Not helping to debunk that whole out-of-control party-girl reputation thing with this tweet, Riri. The rumor is that Rihanna is acting out so much because Chris Brown may have just proposed to his girlfriend Karrueche Tran (Tran Twitpic’d the diamond rings Brown gave her).

Charlize Theron: “I had no teeth until I was 11. I had fangs because of jaundice and I was put on so many antibiotics that my teeth rotted. They had to cut them out! It was tough having school photos taken pretending I had teeth.”

Matthew McConaughey: “That’s all me up there. I’d regret it for the rest of my life if I was in a male stripper movie and didn’t get up there and strip myself. I don’t need a stunt ass.”

Misc/Etc: “I’m living my dream life!” “I wore a Beetlejuice suit” “I heard you poop!” “dirty in the playground” “rather more commitment than he was prepared to give” “super-romantic, intimate” “been made a laughingstock” “very real worries about whether it was possible to love just one woman” “She’s a fool for love” “if anyone makes fun of my baby I’ll kill them!” “all girls want girls” “I’ll blast house music for him” “the word maternity reminds me of old women” “an entire basket of bread and a pizza” “her friends are all talking about how much bigger her breasts look” “teacup pigs” “wine in the delivery room and a boob job!”

Katy Perry and Russell Brand: “Towards the end of their marriage, neighbors in their swanky New York City apartment building could hear Katy Perry shouting obscenities at her husband, British comedian Russell Brand. The fights often ended with Katy in tears, sobbing for hours. Yet despite the venomous rows and an acrimonious split, Russell is now begging for a second chance.” Venomous rows? Is this copy-pasted from a British tabloid? Katy feels “confused by his sudden change of heart. She’s over Russell — and trying to move on. But Russell is turning on all the old charm.” After Perry rebounded with Robert Ackroyd, Brand suddenly reappeared. “Maybe he genuinely does want her back, but with his track record it’s more likely that he simply doesn’t like the idea of her seeing someone else.” Katy’s friends “told her to ignore him or tell him off, but Katy isn’t a cold-hearted person. Her friends are telling her she’d be crazy to go back to him. He’d only end up hurting her.” He flirted with other women throughout their marriage, which “made Katy feel awful.” She wrote back “in a characteristically nice way” saying they could stay friends, but nothing more. He finally unfollowed her Twitter feed on May 12. She unfollowed him after they split. Perry is looking for a long-term new love. “Katy’s not really a dater, she’s more like a one-man girl.”

Justin Bieber Hangs With The Wanted: “I think they just want to get me drunk.”

Jennifer Lopez: “I love candles and I have this beautiful white candle at my house, and it was sitting there, glowing and smelling, and I just love it.”

Kim and Kanye: “They play this game where they each try to come up with ways they could get married but keep it a secret. Like, getting married at a regular church, but they would have to be in disguise, hiring top Hollywood makeup artists to give them prosthetic noses and wigs and stuff like that.” Yes, zero publicity. That is exactly what Kim and Kanye want.

Misc/Etc: “She fed a carrot to a giraffe!” “abandoned outside a Wal-Mart” “a bodybuilder, duh!” “Britney was so excited she wore two outfits” “I burp a lot” “whatever your privates do should remain private with you” “I have the girls smelling great!” “a gasbag on the phone” “he’d be hot in a race car!” “the playboy likes to play the famous-lady field” “told each boy he is easily replaceable” “refrain from sex” “Being in jail is not fun. It’s very dehumanizing” “your body is banging!” “Aimee will come to learn about the loss of her beautiful leg” “the coolest note ever” “angular shades downplay her wide jawline” “I don’t think women should ever feel guilty about what they eat.” “our generation’s Sinatra, Michael Buble”