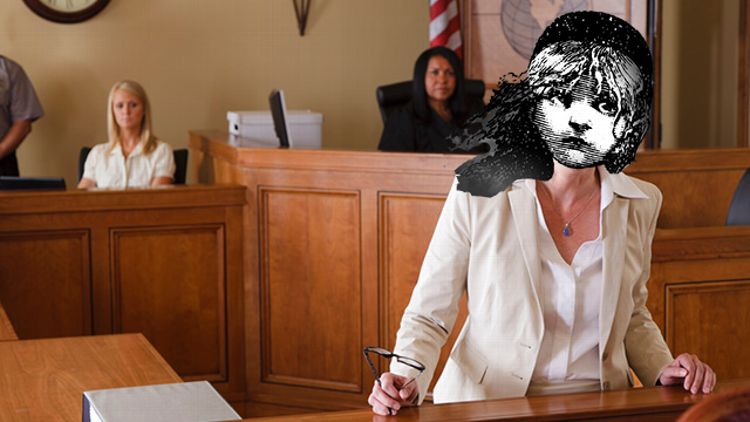 Today Deadline brought us the news that Rob Thomas, creator of beloved cult TV shows Veronica Mars and Party Down, has sold Fox a script for an adaptation of Victor Hugo’s Les Misérables, retold as a modern-day legal procedural. I’ll give you a few seconds to reread that sentence as many times as it takes for all those highly incongruous details to sink in.

The contemporary take is a primetime soap about a brilliant lawyer running a legal exoneration program who fights to evade the consequences of his own unjust conviction many years before. He must navigate high society, continue his mission of saving innocent people, and manage his tumultuous family and romantic life — all while staying one step ahead of a ruthless U.S. Attorney who refuses to let the ghosts of the past die.

This news reminded me of a few of my own long-abandoned pilot scripts that I’m starting to wonder if Fox might be interested in.

(Cop/crime drama) In this modern spin on West Side Story, ride along with seasoned yet disillusioned L.A. police Officer Krupke as he tries to negotiate the escalating conflict between the old guard of Southland gangs and the rising tide of violent white surfer youth migrating inland from Huntington Beach. As he comes to know key players in both sides of the rivalry, and deals with his own crumbling marriage, he must question whether or not deep down inside all of us, there is good.

(Political drama) In this bold reimagining of The King and I, schoolteacher/political fixer Anna is summoned to Washington, D.C., to educate, and bury the story of, a prominent senator’s 200 illegitimate children.

(Medical drama) In this contemporary riff on The Best Little Whorehouse in Texas, Dr. Mona Stangley, one of the most celebrated cardiologists in the country, becomes disillusioned by the American health care system and the difficulty of accessing help for those who need it most. She shocks the medical community by giving up her high-paying position to return to her economically depressed Texas hometown and starting an unsanctioned free clinic run out of a charming stately Victorian home. As she cares for and develops an inseverable bond with the locals, she also rekindles a star-crossed romance with the local sheriff, who must turn a blind eye to her illegal, if well-intentioned, activities.

Rent It or Leave It

(Real estate/lifestyle reality) Inspired by the beloved Broadway hit Rent, each week, we meet a new destitute bohemian New Yorker living in some of the most desirable blocks in the Lower East Side. With our team of life coaches and substance-abuse counselors, we’ll see if they can quit using intravenous drugs and get their lives back on track by the end of the month, or if they’ll be forced out of their apartments by the long list of high-profile clientele willing to pay more than triple their rent!