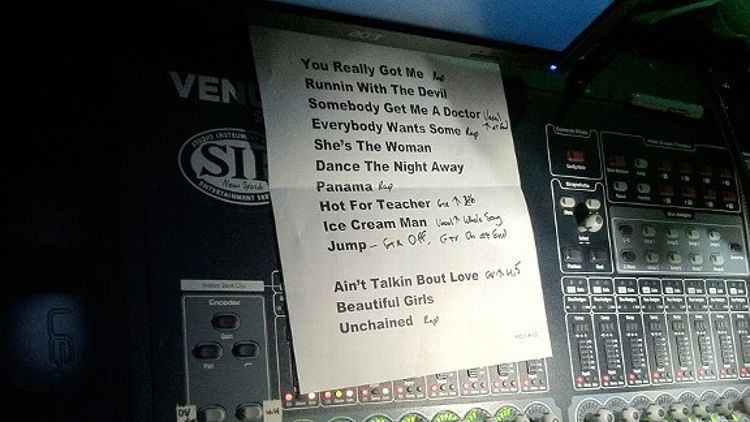 Van Halen performed at Café Wha? last night. It’s possible you’ve already heard reports of this, since Café Wha? only holds 250 people and just about every single person inside the venue was a journalist, an industry bozo, or a former Wimbledon champion (John McEnroe was there). This event was partially the result of Café Wha? being previously owned by David Lee Roth’s 92-year-old uncle, but it mostly happened because Van Halen assumed unfathomable intimacy would be an easy way to remind the media that they’re still awesome. The stage was about 15 feet long and eight feet deep; in 1981, it’s possible Roth could have touched the ceiling with his foot, or at least with his samurai sword. It was a little like watching Darryl Dawkins dunk over Kareem Abdul-Jabbar on a Nerf hoop in your grandparents’ basement.

So, just to be clear: Van Halen is still awesome.

They were really, truly, absolutely incredible. Their 45-minute performance exceeded my expectations, which were unrealistically high to begin with. The musicianship was muscular and impeccable. After Dime Bag Darrell’s funeral and Sammy Hagar’s autobiography, I had a real fear that Eddie Van Halen was going to come across as a stumbling, vomiting, toothless hobbit; in actuality, he was flawless and (seemingly) quite happy. Alex Van Halen was a little restrained owing to the size of the room, but his drumming remained precise and propulsive. Eddie’s son Wolfgang was equally competent on bass and did a remarkable job simulating Michael Anthony’s soaring background vocals, even on songs like “Dance the Night Away.” As a pure power trio, Van Halen has virtually no peers. Robert Christgau once wrote that “this music belongs on an aircraft carrier,” which he meant as a criticism — but for anyone who loves Van Halen, that reality defines the magnitude of their merit. These guys are hydro-electric destroyers. Watching Eddie Van Halen play guitar is like watching the detonation of a nuclear bomb from inside the warhead.

Roth wore overalls, a neckerchief, and a newsboy cap. He talked a little too much and his jokes didn’t make much narrative sense (“Welcome to Occupy Van Halen!”), but his vocals were better than okay. He’ll always be charming: I think the high point was when he did an impersonation of Jim Morrison performing “Stairway to Heaven.” Roth also expressed a strong desire to meet Lady Gaga and delivered an oddly detailed breakdown of rock club demographics within the greater Los Angeles area. Judging from their onstage interaction, it didn’t look like DLR and EVH hate each other, but I’m sure they still must. I don’t think it matters. They know what they’re doing. They don’t need to drink milkshakes together.

The set list was all hits. They played one “new” song, but it’s not remotely new: “She’s the Woman” was actually recorded on an early Van Halen demo, financed by Gene Simmons in 1976. There are other unreleased tracks from those sessions that are equally competitive (“Put Out the Lights,” “Let’s Get Rockin’,” the KISS-like “Babe, Don’t Leave Me Alone,” and a different version of “House of Pain”), so perhaps this “new” Van Halen album (set for release in February) will just be a reconstitution of unused material from the middle 1970s. I really hope that is the case. I will never understand why classic rock bands feel a moral obligation to write new songs that nobody wants. That’s like working at McDonald’s when you’re 80 instead of cashing in your war bonds. Van Halen has nothing to prove to anyone. Just blow us away.

The set at Café Wha? was abbreviated by two songs — the encore was supposed to include “Beautiful Girls” and “Unchained,” but there was ultimately no encore at all. I was in a cab before 10 pm. They opened with “You Really Got Me” and played “Jump” at evening’s end, without a visible synthesizer. The music was loud, but never painful. I only saw Eddie smoke one cigarette, so maybe C. Everett Coop finally wore him down. The whole night was pretty dreamlike, although not like any dream I’ve actually had; it was more like a dream I would make up if my psychoanalyst worked part-time at a strip club. I think I’m gonna play Van Halen II continually for the next 18 months. I advise you to do the same.

Filed Under: Reunions, Things That Are Amazing, Van Halen