The Impossible Dream of ‘Jodorowsky’s Dune’ 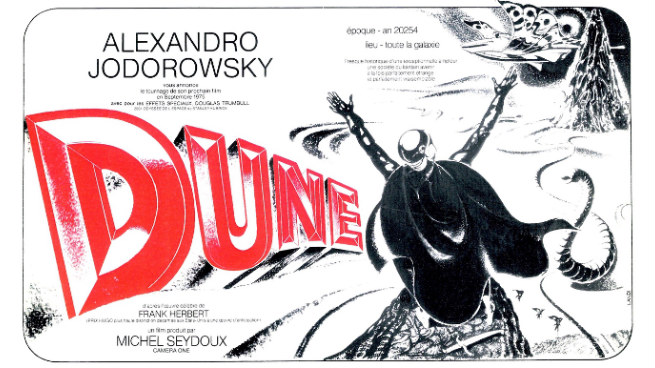 Millions of movies never get made, even ones with powerful names behind them. But what happens to a cinematic idea that goes unprojected? Auteurs’ unfulfilled dreams become white whales for fans. Sisyphean projects like Stanley Kubrick’s extensively researched Napoleon biopic or Terry Gilliam’s doomed attempts to make a movie called The Man Who Killed Don Quixote have inspired decades of lore. Because the movies don’t exist, they can never disappoint expectations, which grow increasingly wild over the years.

Frank Pavich’s documentary Jodorowsky’s Dune is the story of one such unfilmed legend, the Chilean French cult director Alejandro Jodorowsky’s attempt to film Frank Herbert’s sci-fi blockbuster. His Dune was conceived and developed during the mid-’70s, in the years between 2001: A Space Odyssey (1969) and Star Wars (1977), and the documentary makes a case for it as the missing link between Kubrick’s stunning cosmic psychedelia and George Lucas’s pulp-inspired space opera. Jodorowsky’s Dune, it is posited, was too ahead of its time but predicted the trends that would come to dominate ’80s sci-fi. The big plot twist at the end is that the team of special effects artists and illustrators Jodorowsky assembled for his unfinished opus later created a different game-changing sci-fi movie: Alien. Dan O’Bannon wrote the screenplay, and brought on artists H.R. Giger, Chris Foss, and Jean “Moëbius” Giraud, all of whom worked on the unmade Dune. Jodorowsky’s Dune is a story about alternate history. Would his Dune have changed the course of film, or is that just the pipe dream of those involved? Jodorowsky himself is now in his eighties, and he has a manic charm that easily explains how he brought so many followers into the fold. He describes assembling his Dune dream team in Seven Samurai terms. He was looking strictly for “spiritual warriors” who believed in his mission of creating a film that would act like a psychedelic on the brains of viewers. His prior two movies, The Holy Mountain and El Topo, had demonstrated an uncanny ability to visually represent the landscape of the unconscious mind. Jodorowsky’s surrealist imagery is so specific and personal that it also feels universal. He describes his vision with such optimism and belief in the medium of film, it’s infectious. He talks a big game about the possibility of film as philosopher’s stone, but if you’ve seen The Holy Mountain you know he’s not just talking shit that mutates into gold. Jodorowsky’s fervor goes beyond regular film fanaticism into the realm of zealotry. He is absolutely delightful and hypnotically magnetic right up until the moment he goes slightly too far over the edge, comparing adapting a novel to raping your bride on the wedding night. In keeping with the doc’s auterist bent, the hypothetical Dune would have been littered with symbolic icons. Jodorowsky envisioned his surrealist hero Salvador Dali as the “mad emperor of the galaxy” and Orson Welles as the evil baron. He recruited Pink Floyd and the French prog-rock band Magma to do soundtracks, and convinced Mick Jagger to play a louche character who is pictured on a storyboard as he “burns a butterfly and smokes a long joint.” With its reams of detailed sketches and gorgeous concept art, Jodorowsky’s Dune recalls Stanley Kubrick’s Boxes, another documentary about a great director’s archives. The obsessiveness that is an asset when it fuels directorial perfectionism can become a liability, sending artists on a never-ending quest toward a mirage of faultlessness. Jodorowsky throws a few digs at Kubrick’s 2001 for being emotionless, although it is the movie that most closely mirrors what Jodorowsky says he was trying to make: a movie that would act simultaneously as high art, entertainment, and entheogen. The documentary’s running joke is that nobody involved with the movie had actually read Herbert’s 1965 novel, which won the inaugural Nebula Award. Jodorowsky chose the project with the carte blanche he was given after The Holy Mountain became a hit, but he admits it was random. In Jodorowsky’s world, this seeming randomness is linked inextricably with determinism. There was no choice but to make Dune, and there was no option but for Dune to never get made. It was too big, too ambitious, too logistically insane for its time. Another thing that is sort of glossed over in the doc? His script bible, as filmed, would have made for a movie about 14 hours long. Jodorowsky wasn’t daunted by the length, and he figured audiences wouldn’t be either. He didn’t care about three-act structure. This was to be a tone poem. He planned to open with a long shot through space, even longer than Welles’s opening shot from Touch of Evil. Ambitious long shots? Psychedelic imagery? Ten-hour narratives? Can HBO get Jodorowsky to direct Season 2 of True Detective? In the shadow of the Death Star, Dune sounds wholly plausible. Ultimately, it wasn’t the lack of technology that felled Jodorowsky’s Dune, it was the studios. Despite the success of 2001, nobody wanted to fund his vision. The window that opened in the ’60s and early ’70s, when commercial film was freed from the traditional constraints of the form and began to fuse with the avant-garde, quickly snapped shut. When the money ran dry and the movie stalled, the rights were sold to Dino De Laurentiis, who enlisted David Lynch. Jodorowsky was tormented by jealousy, because he admired Lynch’s work. Ultimately he was dragged to see Lynch’s much-maligned film adaptation, and was overjoyed to discover that he hated it. Jodorowsky was inspired by comic books, and he eventually put many of his ideas about Dune into graphic novels. At some point he had the revelation that through comics he could translate his visions into images without having to raise millions or please suits. Watching Jodorowsky describe his Dune to the doc’s camera is mesmerizing, and the concept art is evocative. The animated sequences make a good argument that Dune might have worked best as an animated movie, without the limitations of human actors interrupting the majestic waltz of sandworms and stars.

For ambiguous reasons mostly attributed to his heartbreak over Dune not going forward, he didn’t make another movie for more than 20 years. And in a post–Star Wars universe, Jodorowsky’s ideas for Dune would likely have been labeled too weird. But it seems like weirdness in a film should be considered an asset rather than a pejorative — better to be too original than too contrived, right? This is where the studio system has always failed and continues to fail. Shouldn’t it be obvious by now that one person’s specific vision is always superior to the crowd-sourced product that comes out of studio notes and multiple writers’ rewritten drafts? It’s always a roll of the dice, and even the best-laid plans sometimes encounter natural disasters or other unpredictable phenomena. If the movie gets made and turns out well, you’re a genius. If the movie gets made and turns out poorly, you’re a failure. But if the movie never gets made — if it just dissipates into the atmosphere like so much spice melange, only to be absorbed by future hive-minds — you’re just a lunatic with lots of sketchbooks.