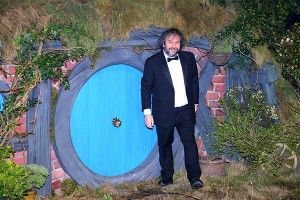 Of course, this being a huge giant expensive franchise and all, that big record-breaking number still isn’t good enough to match all industry expectations. As EW explains, the numbers suffered a severe drop-off between Friday and the rest of the weekend, and so the concern might be that all the Gandalf-a-maniacs ran out to see the thing the first chance they got, and now the movie’s in for a slow and steady decline. Not that there’s that much to worry about. Internationally, The Hobbit’s already pulled in $138.2 million and has some big markets yet to open in, including China. Domestically, it’s got the Christmas break stretch — where nerds, stoners, and stoner nerds will have even more free time to watch movies — to take advantage of. And, despite lukewarm reviews for the film overall and some straight-up terrified reactions to the 48 FPS format, The Hobbit has managed an “A” Cinemascore. Plus, there’s that genius Denny’s promotion. No way The Hobbit underachieves when it’s got the home of the Moons Over My Hammy Omelette™ on its side.