The Hidden Lessons of The Bachelor’s ‘Women Tell All’ Episode 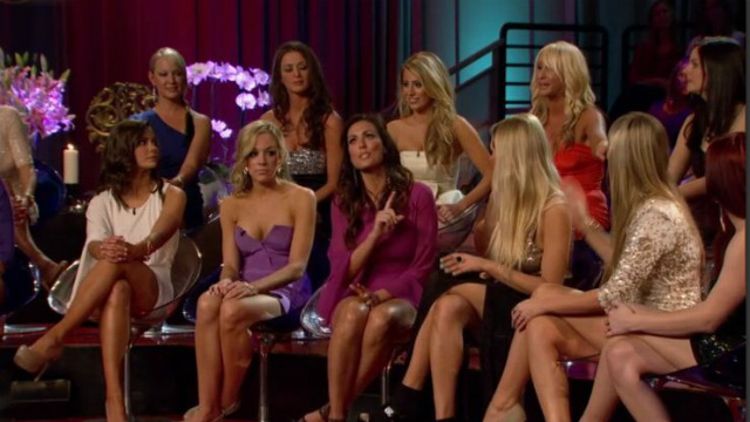 During a masterfully manipulative and tear-soaked apology on last night’s predictably drama-crammed “The Women Tell All” special, Courtney, confronted with a litany of her various misdeeds by a frothing mob of TV sister-wives, wailed, “Nobody gives you a manual on how to be on The Bachelor!” She’s right: There is no manual, yet, at least in the traditional sense. Though Courtney is almost certainly planning to publish a best-selling, tactical treatise after next week’s finale (remember: The outcome is irrelevant; she’s already won by making herself the undisputed star of the season), my consulting firm for aspiring Bachelor contestants has already been beating her to market for weeks now by harnessing the power of the Internet. Our online “teaser lessons” have already been “downloaded” over 300 million times, and pre-enrollment for our first seminar, “Total Rose Domination: Unleash the Ruthless Flower-Hoarder Within,” is so high that we may have to relocate it from the L.A. Convention Center to a three-venue simulcast at Staples Center, the Nokia Theatre, and the Rose Bowl. (Look at them doing the branding for us!) But enough with the self-promotion (that course is still being drafted, anyway), and on to the learning. While “The Women Tell All” episodes might have been conceived as series-stretching, catfighting filler, they’ve evolved into a crucial part of each season’s narrative, and as such, there’s a wealth of strategic knowledge to be harvested from each. So let’s dive into last night’s installment and see what we can learn. You’re only moments away from taking your next set of baby steps toward a televised temporary engagement! Get excited!

1. Dress appropriately for the occasion.

If you’re sitting on a riser among 16 women with whom you’ve spent an incredibly intense, alcohol-drenched part of your life, you’ve already been eliminated from the competition, possibly months ago. But you’ve been handed an invaluable second chance at personal branding; while “winning” is technically off the table, the eyes of America, and, more important, those of ABC’s alternative programming executives, are upon you once again. Make a good first impression and dress like you belong there, something sexy but classy, show-offy but not trashy. If you choose something that, say, makes you look like a slutty sorceress, as continuing tactical disaster Blakeley did last night, those casting directors are, at best, going to tab you for the herpes-infested hellhouse that is Bachelor Pad, and you might as well just continue plying your VIP-cocktailing trade. You want a shot at The Bachelorette. And the Bachelorette, always an avatar of girl-next-door approachability, is not stirring a bubbling cauldron of Spanish Fly while chanting filthy spells. She’s appearing on Us Weekly covers twice a month for the better part of the next year. Dress the part.

A significant portion of “The Women Tell All” seemed to focus on Blakeley’s myriad missteps, as she stood accused of announcing her early invocation of the hackneyed competition-show mantra, “I’m not here to make friends.” Everyone knows this. Don’t say it. You’re going to spend the vast majority of your time in what is essentially an art-directed sorority house; form some bonds, have a few laughs, drink directly from the champagne magnum the producers pass around to your new sisters while the cameras aren’t rolling. If these women aren’t your friends, they’re your mortal enemies, and they will tear you the fuck apart on the “Tell All.” While you try to pat yourself on the back for your honesty, they will tear off that arm, gnaw on the fleshy waddle, and floss with your tendons. Only one kind of contestant can openly play the “I’m not here to make friends” card, and that person is a model who puts out. And on “Tell All” night, even she will pay the price.

3. If you really have nothing at stake, reclaim some measure of dignity.

Consider Brittney, who chose to leave the show on her own terms some weeks ago, but returned to “Tell All” to let the world know her departure was due to the fact that she felt absolutely no attraction to Ben. And the world exclaimed in unison, “RIGHT?!” In so doing, she probably removed herself permanently from the Bachelor ecosystem, but she confirmed what millions of viewers have been intuiting for weeks: Ben is no cream dream. A big win for Brittney.

4. If your “desperation cameo” doesn’t work the first time, come back again.

You really have nothing to lose. If you’ve already crossed seasons to grab at a second chance at Bachelor love, as Shawntel did, and been humiliated by a mansionful of women who instantly realized that your personal romantic journey is about to eff theirs the eff up, why not return for the free shot represented by the “Tell All”? Get your story out there. Tell everyone what you were thinking. They already know: You missed the cameras, you missed the Pinot-supercharged camaraderie, you missed taking breathtaking sexual gondola rides in Switzerland instead of jamming embalming needles in cadavers. Everyone gets it. So treat yourself to one last date with Chris Harrison and America. Can’t hurt, really.

5. Publicly reflect on your strategic mistakes.

The great philosopher (and Smacketology overall no. 1 seed) Omar Little once taught, “You come at the king, you best not miss.” Truer words, truer words. Remember poor Emily? She broached The Courtney Problem one too many times, her tactically superior rival swiftly counterattacked, and the outflanked Emily was toast. To her credit, she did note this crucial error in strategy at the “Tell All,” potentially saving future lives. Her Bachelorette hopes are still alive should she get the opportunity to put her promising rap-edemiology career on hold and return to the Rose Game.

6. When watching yourself on the “Tell All” monitors, show no emotion.

Yes, it’s painful to watch an expertly edited montage of your nationally televised rejection in a studio full of your rivals, but don’t give them the satisfaction of breaking. Stay stoic. Retreat to your resilient place, where “I Will Survive” is on continuous loop as you work a heavy bag, making yourself stronger, tougher, better. Everyone expects you to cry. Don’t do it. He wasn’t worth it, he was having sex with the model the entire time.

Though your fellow contestants will crucify you for it on the “Tell All,” the truly great contenders have fully realized “date personalities” and “house personalities.” But you know what? They’ve already lost, victims to the hobgoblin of consistency. By cultivating a double-edged persona, your Bachelor will think your “date personality” is the “real you,” while ascribing any gossipy intimations about your “fakeness” to the other girls’ insecurities. Even if he does eventually catch up to this strategy, it’ll be too late, and you’ll be in the finals, already a winner. Oh, and this is important: This works best if you’re a model. No one expects the model to act like a “normal person.” Hell, develop a third personality, name it “Matilda,” give it a Mrs. Doubtfire accent, whatever. You’ll just be seen as “fun” (because you are also putting out, you know how to play the game).

8. When your moment of “Tell All” reckoning comes, act contrite. But don’t mean it.

If you’ve successfully positioned yourself as the season’s antagonist, you’re going to be required to face a “Tell All” firing squad of the angry, jilted bachelorettes you utterly dominated over the previous weeks. They will come armed. They will come thirsty for vengeance. They will demand that you “apologize,” and that you admit that you have “taken Lessons From The Experience.” Wait them out, let them have their say, nod with affected sincerity until you are ankle-deep in the empty 9mm clips of their emotional firefight. Then “apologize.” Tell them that yes, you have Grown As A Person and Have Learned So Much About Yourself, and that You Could Have Handled Things Better. Inflect all sentences as questions, the subtle, rhetorical equivalent of crossed fingers behind your back, because you are sorry about nothing. What are you apologizing for? Winning? Outmaneuvering an overmatched battalion of tactically flatfooted enemies? We remind you: You’ve already won. You’re sitting at center stage, not on the riser with the gang of tomato-hurlers who keep shouting over each other in a last-ditch attempt at TV glory. Shed a couple of crocodile tears just for the empty thrill of it, a masterful display of your virtuosity with your emotional instrument. Next week America will be watching you standing atop a snow-capped mountain in Switzerland, or, if the producers get really ambitious, bounding in slow-motion across a desiccated lunar lake toward a floppy-haired astronaut proffering the two-carat prize you don’t actually want. In any case, it doesn’t matter. Next week, you’re not just a model. You’re your most perfect self.