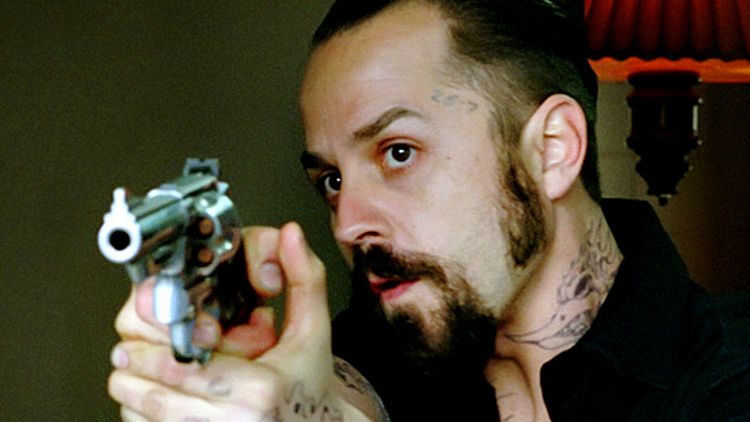 Contraband, the latest attempt by Mark Wahlberg to prove that he’s still the captain of the Junior Varsity Action Star Team, opens in theaters today. Though Wahlberg’s indisputably the star, toplining another virtuoso showcase of his ability to toggle between charming and enraged, what we’re really intrigued about is Giovanni Ribisi’s turn as the psychopath threatening Wahlberg’s family. There’s been a sleazebag element in just about every role Ribisi has played, whether he’s the lead or a supporting character, a hero or a villain. In Contraband he goes Full Sleazebag: slicked-back hair, scraggly beard to obscure his baby face, neck tattoo, a uniquely irritating voice. He’s like a Mini Me version of Nicolas Cage in Kiss of Death. To see how Ribisi got to this level, here’s a guide to some of his previous sleazebagtastical (yes, now an official word) turns.

Character: Kip Raines, whiny, in-over-his-head car thief who causes his legendary car-thief brother to get back in the game for just … one … last … job.
Type of Sleazebag: Sleazebag With Something to Prove
Sleazebag Accoutrements: Goatee with untamed cheek whiskers (poignantly shaved off by the film’s final scene to show that he’s now a Car Thief With Honor), greasy hair, dirty undershirt.
Sleazebaggiest Moment: After nearly being murdered in a car compactor, cooks his brother an inedible breakfast while nursing a breakfast beer.

Character: John, frazzled photographer and husband who is selfishly immune to jetlag.
Type of Sleazebag: Thinly Veiled Spike Jonze Stand-In Sleazebag
Sleazebag Accoutrements: Oversized sunglasses, new habit of using hair products.
Sleazebaggiest Moment: Semi-flirting with a flighty actress (Thinly Veiled Cameron Diaz Stand-In) while his wife makes faces as if farts are coming out of both of their mouths:

Character: Seth Davis, entrepreneurial outer-borough resident looking to get rich quick by working as a stock broker, “the white boy way of slinging crack rock.”
Type of Sleazebag: Aspiring 1-Percenter Sleazebag
Sleazebag Accoutrements: Bad suits, worthless stock.
Sleazebaggiest Moment: Watching as he spreads the greed and screws over his clients, as personified by Harry, a hapless purchasing manager at a gourmet foods company who loses his and his wife’s life savings. Or was it this?

Trailers of the Week: Shut Up and Play the Hits, Moonrise Kingdom, and More