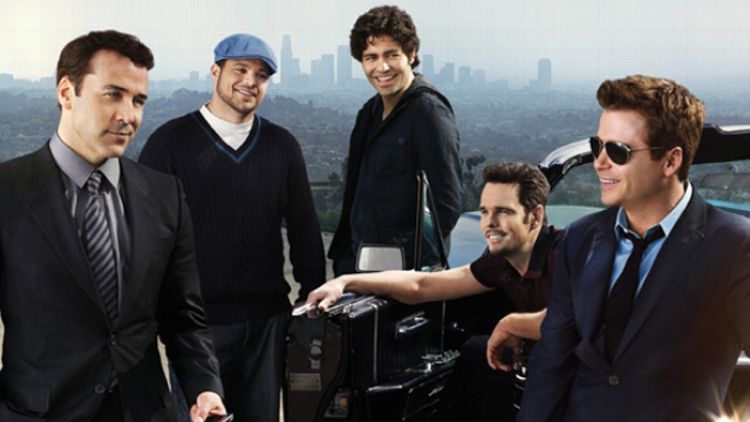 Hush now. Sssssh. Press an ear to the warm stones on the patio of the Chateau Marmont, and maybe you can hear it, rumbling in the distance. Can you identify the noise? Is that a train coming? A runaway freight train full of premium-cocaine dreams, dispatched right on time from Miracle Station and headed straight for Hollywood?

No. Listen more closely. You know what it is. It has been a long time, but that sound is unmistakable. It’s the far-off roar of the stretch Hummer engine, the rat-a-tat pops of a 21-Cristal-cork salute, the whipcrack report of the high fives of brothers who knew it was all going to work out in the end, as it always does, as it always has.

That’s right. The Entourage movie is a go.

The Entourage movie is a motherhugging go.

The deals have all closed. The back end has been divided fairly. Possibly not equitably, because come on, out here in the real world Jeremy Piven is 10 times the star that Aquaman is, he has got his own blockbuster department store–magnate series on ITV and PBS, he has got more cravats than the entire downstairs staff at the Abbey. But divided fairly.

They tried to tell us it was happening, that nothing could keep them down. But we plugged our collective ears and refused to listen. We didn’t trust in the Instagrams. We said we’d believe it when we see it. We scoffed at the hubris of those who dared think there still might be any more story to tell after the gang boarded those twin private jets in the series finale, the kind of hubris that orders the pilot to set a course for the sun itself and then looks surprised when the wax bolts on their G6 Icarus wings begin to melt.

But the boys kept the faith. They stuck together. They got each other’s backs.

And then, finally, it paid off.

It's a go. love you all. pic.twitter.com/KcIPV5fqR8

Now it's time to go to WORK! the #EntourageMovie is on and I look forward to getting into it my friends. Thanks for your patience…

On behalf of the 4 guys I wanna also thank the #entourage fans for the patience. The BOYS are BACK. " it always works out"

Turtle again, but with a screen-grabbed tweet just in case his Twitter followers missed the happy news?

I once tickled Lou Reed. I regretted it for the longest while as he spoke to me few times after that dinner. But I'm glad now. He needed it.

Perfect. Drama always loved that story. He’s always telling it like he was the one with his fingers digging into a legend’s ribs, and no one questions it because of course Lou was a big Viking Quest fan.

In January, the cameras will roll. And this crazy little $30 million dream will begin its journey to reality.

We can’t wait. Have Turtle pull the Escalade around, we’re going out to celebrate.

[They high-five and look out over the city that has given them so much. The city high-fives them back.]