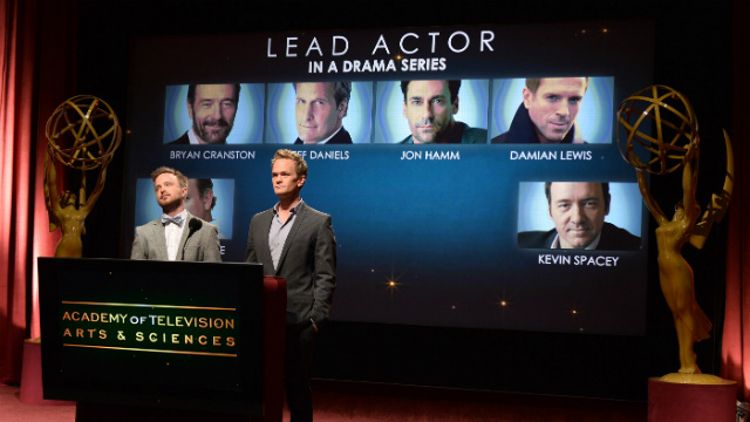 Kate Mara was a no-show for the Emmy announcements this morning, broadcast as they have been since time immemorial from the steerage class mess hall on Les Moonves’s war yacht. Airplane trouble was to blame — the actress was reporting a story for Slugline in Arizona — but no matter, because the pre-dawn ceremony was about the only place where her House of Cards didn’t make an appearance. The doomy Netflix original crashed the 66th Primetime Emmy Awards in a big way, garnering nine nominations in major categories ranging from dramatic actor (Kevin Spacey) to dramatic actress (Robin Wright) to dramatic clavicle (also Robin Wright). That means the happiest person in Hollywood this morning isn’t actual Emmy host Neil Patrick Harris, whose celebrated podium charm replaced Mara at the last minute. It’s Reed Hastings. This was exactly the outcome the Netflix CEO was envisioning when he outbid HBO for 24 episodes of the David Fincher–helmed Cards. Hastings knew his company needed the strong appearance of quality, if not the thing itself, in order to get attention and respect from a dubious industry. Regardless of whether Netflix actually goes home with any awards on September 22 — Jason Bateman was also nominated for Arrested Development; I have a feeling Spacey is taking the trophy — Hastings has successfully evolved his company from red envelopes to the red carpet.

That was the biggest takeaway from what felt like a transition year for the Emmys. All of the old favorites were nominated — and, in the case of Dame Maggie Smith, I mean that quite literally. 30 Rock received 13 nominations for its phenomenal final half-season and even a wheezing The Office grabbed a writing nomination for series adapter Greg Daniels’s tasteful finale. The casts of Modern Family and Downton Abbey once again clogged up the ballots in the comedy and drama categories, leaving little room for fresh blood like New Girl and The Americans. While, speaking of blood, Game of Thrones (16 nominations) and American Horror Story: Asylum (17) treated the technical and miniseries categories the way Walder Frey treated guests at the Red Wedding. Boardwalk Empire was the only formerly major player to fall off the map this year (10 nominations, but mostly for hairstyling and costuming), and it’s probably best to think of that not as a snub (although the second half of Season 3 did improve considerably) but as the first sign of big changes to come.

This is the penultimate eligibility year for Mad Men and Breaking Bad, the final two Golden Age shows. And it certainly felt as though Mad Men, with a truly shocking zero nominations in the writing category, was being rushed from the stage early. (As I tweeted earlier, that rush of wind and gnashing of teeth you heard emanating from Brentwood this morning wasn’t a localized sharknado. It was Matt Weiner receiving the news.) In order to keep their seats at the table, Homeland and even the sainted Downton Abbey will have to prove that their soapier elements can be rinsed away in upcoming seasons. I don’t think their slots are protected year-to-year the way they have been in the past. There are just too many excellent programs knocking, Walter White–style, at the door. The Emmy kings aren’t dead. But the kings might not have long to live.

The Emmys are an arbitrary popularity contest voted on in secret by faceless people with suspect taste. Print that on a card, stick it in your wallet next to the dry cleaning claim checks, and reach for it anytime someone reminds you that The Wire never won anything (or Steve Carell, or Nick Offerman — pick your own poison). Disappointment and fan outrage is to the Emmys what rain is to Seattle. It’s both healthier and more productive to focus on the stray bits of sunshine when they manage to poke through. To that end, the attention showered on Sundance Channel’s otherworldly Top of the Lake was heartening: eight nominations including well-deserved nods for actors Elisabeth Moss (also rightfully nominated for Mad Men) and the incandescent Peter Mullan. Connie Britton (Nashville) and Kerry Washington (Scandal) have been putting on weekly clinics refuting the notion that all the juicy parts are on cable; it was great to see them rewarded for the effort. And though I’ve yet to check in to Bates Motel, I’m always happy to see the outrageously talented Vera Farmiga recognized.

It was wonderful to see the late Henry Bromell posthumously nominated for his script for “Q&A,” the most intense and arguably strongest hour of Homeland‘s divisive second season. And the Supporting Actor in a Drama Series category is a treasure trove of riches, from Aaron Paul and Jonathan Banks of Breaking Bad to the equally magnificent Mandy Patinkin (Homeland) and Peter Dinklage (Game of Thrones). Jim Carter, as the careful Mr. Carson, is both the best and most understated thing about Downton Abbey. And Bobby Cannavale deserves any award he can muster, even though his turn on Boardwalk Empire was often hammier than the call sheet for Mad Men. (Speaking of which: Hooray for Jon Hamm, who will never win but — come on! — really should, and for Harry Hamlin, nominated for guest actor in a drama. His bizarro turn as Jim Cutler has given his career an adrenaline shot straight to the butt.) Behind the Candelabra, one of the best movies of the year on TV or anywhere, was rightfully rewarded with 15 nominations, including the obvious (Michael Douglas and Matt Damon) and the welcome (Scott Bakula, whoever was responsible for Rob Lowe’s face).

Lest we get too lost in our Orphan Black–boostering daydreams (the #TatianaWasRobbed hashtag will be trending by teatime), let’s take a moment to celebrate things we take for granted: that we live in a world where Lena Dunham and Girls are nominated for episodes in which Adam Driver (also nominated) angrily ejaculates on onetime WB starlets; that no one bats an eye when Louis C.K. and Louie share the stage with Jim Parsons and Big Bang Theory. And that Julia Louis-Dreyfus (who will win) and Amy Poehler (who wins at life) are showered in the attention and accolades they so richly deserve.

John Landgraf, the CEO of FX Networks, isn’t a smiley guy. But I bet his face grew imperceptibly terser this morning. His channel is creatively ascendant, but, for now, still an afterthought at the Emmys when you take the awards gamesmanship of “miniseries” American Horror Story out of the equation. Louie gets love, but the highly rated (and highly regarded) Justified and Sons of Anarchy were completely overlooked. (I think FX’s day is coming. Think of the reactive mind-set of Emmy voters when your mom starts saying YOLO in 2016.) Most egregious of all was the way the Academy boycotted The Americans like the 1980 Summer Olympics. After a ferocious first season, sleeper agents around the country expected to see more than a nomination for Margo Martindale (Guest Actress in a Drama) and one for best opening theme. Personally, I agree. I think Keri Russell gave a performance on par with any of the talented women in the lead actress category, and Matthew Rhys and Noah Emmerich ought to be recognized for their exceptional work as well. But The Americans was a slow grower in the industry conversation, and I’m not surprised that the Emmy voters were equally slow to catch on. Here’s hoping this particular cold war thaws in time for next year’s ceremony.

As far as individual snubs, well, it’s generally a sucker’s game to harp on them. But, sure, I would have liked to see Charles Dance seated malevolently in the audience after his vicious turn on Game of Thrones this year. Or to see some shine thrown to the perpetually mocked Vincent Kartheiser, who makes playing a venal creep seem almost too easy on Mad Men every week. Tony Hale is certainly hilarious on Veep, but is he better than Timothy Simons, who plays the world’s tallest punching bag like a bulletproof Lothario? Two of my favorite supporting turns of the year came from Corey Stoll, who provided the icy House of Cards with its one burst of human emotion, and Abigail Spencer, who set fire to Rectify‘s chilly remove every time she burst onto the screen. Neither were nominated. On Nashville, Hayden Panettiere turned what could have been a one-note joke of a character — and, it ought to be said, of a career — into a complicated, Swift-ian heroine.

And it’s an annual tradition to bemoan the Academy’s stodgy taste in comedy, so let’s run through it one more time here. After getting some deserved love last year, Fox’s New Girl was snubbed for what was an even better second season. All due respect to the graying gargoyles of Modern Family, but Jake Johnson and Max Greenfield ate their lunch in 2013, then played an extravagant drinking game afterward. And I wouldn’t want to run afoul of every single one of my critical peers and suggest that Laura Dern isn’t worthy for the late, highly lamented Enlightened. But Zooey Deschanel was awfully impressive as she transitioned a manic pixie dream girl of a part into something approaching real life. The dearly departed Happy Endings made me laugh harder — and faster — than anything else in 2013, but there was no way the Academy was going to pay attention to something that was abandoned by its own network. And, five years in, it’s still possible to gin up outrage for the shoddy treatment afforded Parks and Recreation, which ought to be in the conversation for best show on television, regardless of category, but is forced to settle for a Poehler courtesy nod instead.

But come on. This is the Emmys. There’s no shame in losing. And, as The Wire and Steve Carell and dozens of other beloved geniuses can tell you, there’s even less shame in being ignored completely.

You can see all the nominations here.