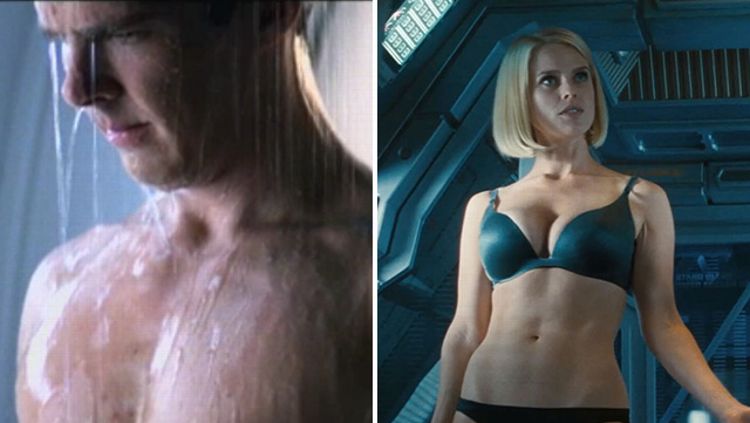 Last night, Conan O’Brien had J.J. Abrams on his show to talk about Star Trek Into Darkness, among other things of course, and at one point the conversation turned to Alice Eve and her brief, yet exceedingly stupid and gratuitous, underwear shot in the film. (Conan’s stance: “I didn’t personally see what the fuss was about, myself — I was quite happy about the scene.”) For those of you who haven’t seen the film, Eve plays Carol Marcus, a purportedly brilliant scientist who teams up with Kirk and Spock et al. At one point (I think it was an action scene, but the whole film is kind of a big clangy blur to me right now) it becomes imperative that Marcus change her outfit, and does so while Kirk watches, then is offended by his ogling. It lasts less than five seconds but the outcry over it on the Internet has lasted a lot longer.

Abrams is visibly dismissive of the complaints, because when your movie makes $85 million and it’s still considered a disappointment, I guess it’s hard to care about what some uppity female fans whose money you already have think. “The intent was, it’s Kirk, who’s always been a sort of womanizing character. So the idea was, have a beat like that in the midst of all of this action and adventure,” said Abrams, who talks about storytelling the way food engineers talk about getting the perfect mouthfeel in their Cheetos. “I don’t think I edited the scene in quite the right way,” he goes on to admit. Then he unveiled a seven-second deleted scene of Benedict Cumberbatch taking a very grumpy shower.

After being called out for the Marcus scene, primarily by female-oriented sci-fi/fantasy blog The Mary Sue, STID screenwriter Damon Lindelof posted a clumsy apology on Twitter that was only slightly less wince-inducing than his letter to MTV on the subject.

I copped to the fact that we should have done a better job of not being gratuitous in our representation of a barely clothed actress.

We also had Kirk shirtless in underpants in both movies.Do not want to make light of something that some construe as mysogenistic.

What I’m saying is I hear you, I take responsibility and will be more mindful in the future.

Also, I need to learn how to spell “misogynistic.”

There’s a thing that both Abrams and Lindelof — and plenty of their critics, as well — seem to think exists here, some kind of nudity exchange or Daily Recommended Value; that showing Chris Pine or Benedict Cumberbatch shirtless somehow “pays for” the Alice Eve eye candy. But the real complaint here isn’t really about nudity — it’s about bad writing, and it’s about context. You can get away with a gratuitous bikini babe in a Fast & Furious movie because the expectations are different, but this is supposedly one of the best genre writer-director teams in the game, tossing a nudie shot into a high-profile franchise film because they figure we’ll consume whatever they give us without question or examination. It’s like product placement, except the product is misogyny. It insults the intelligence of both male and female viewers.

Game of Thrones has been in the news recently for similar reasons — Oona Chaplin, who plays Talisa Stark, recently told the Telegraph, “One of the girls in the show who got her kit off the most in the first couple of seasons [cough cough Emilia Clarke cough] now doesn’t at all because she said, ‘I want to be known for my acting not for my breasts.’” (Clarke’s breasts made their triumphant return in last week’s episode, in a scene that was arguably more powerful and suspenseful because of the nudity.) It’s interesting to hear that the actresses on GoT have mixed feelings about the copious (mostly female) nudity, because it has always just been a fact of life in Westeros, even as the show maintains a strong female fan base. Unlike Star Trek (all fanfic aside), Game of Thrones has a “sexy” reputation, and generally chooses to convey sexiness via female boobs and butts; you probably know what you’re getting when you start watching it. The only men who have gone full-frontal were a would-be assassin being tortured by the Dothraki, and Hodor. Only fools show their junk in Westeros.

While that’s plenty telling, I’ve always had a hard time getting terribly worked up about it. Maybe it’s because Thrones, rather than “pay for” the female objectification with male objectification, opts to populate its story with a wealth of dynamic female heroes and villains, and passes the Bechdel test nearly every week. Sometimes that balance gets skewed — Theon’s extended, pornographic sex torture a couple weeks back comes to mind. But when I ask myself if I would rather see Robb Stark “get his kit off” (keeping that cute Britishism; thanks, Oona), my immediate reaction is ambivalent at best. I’m not that bothered by the nudity on Game of Thrones; I’m more bothered when it’s transparently lazy. It’s also not as if straight men are the only demographic for whom female nudity translates to sexiness. Maybe women are just better at empathizing with onscreen characters; I remember reading an advice column in Seventeen when I was a tween in which a girl was worried she was a lesbian because she got turned on by the sex scenes in Wild Things. Maybe! Maybe not! Sex is weird and brains are weird!

It’s hard to argue that Clarke’s iconic, totally nude scene at the end of the first season of Thrones is misogynistic. It’s easy to argue that Carol Marcus in her underwear is. In the end, Lindelof and Abrams and David Benioff and D.B. Weiss can show all the anatomy they so choose. All we really ask is that the stories be good.

Rembert Explains the '90s: The Saved by the Bell Graduation Finale