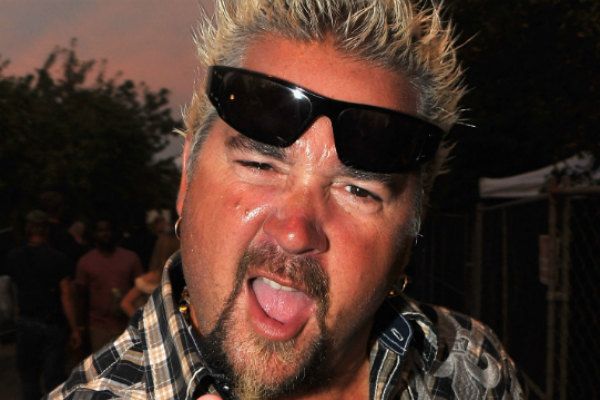 In this corner: Guy Fieri, the immensely popular Food Network personality best known for a gauche personal aesthetic and an unabiding devotion to anything fried repeatedly. And in this corner: Pete Wells, the New York Times food critic, now enjoying quite the professional dream week. Wells’s review evisceration of Fieri’s first New York City restaurant, the aptly named Guy’s American Bar & Grill, has blown up beyond all measures of standard food-crit awareness. It’s got the city’s food scenesters all riled up about their dude Wells doing the Lord’s work in calling out Fieri; it’s got Guy’s Middle American army rising up to decry the eggheads up in New York. And this morning, it even got to the Today show.

“To me it’s impossible to have a dining experience and have every single thing go wrong,” Fieri says, nicely hitting his talking points. “Unless you come in with a different agenda and you wanna sensationalize something … it’s a great way to make a name for yourself. Go after a celebrity chef that’s not a New Yorker that’s doing a big concept in his second month. Great way to hit it.” And then he cackles for no reason. He’s shaken up, but he’s fighting back! So is he right? Did Wells just shoot down a dumb, easy target? Or was the Fieri take-down fair game?

FirstWeFeast, for one, thinks Wells might have lost the thread here a little bit: “Reading a New York Times critic dressing down Guy Fieri — the Max Patkin of American Eating, a human Koopa Troopa whose sole calling in life is profiteering from the pleasure of unnecessary human bloat and decay — is what we imagine it would be like to watch Lester Bangs explain to Taylor Swift everything that’s wrong with her and what she does. Sure, it’s good for a laugh, but the latent elitism and misanthropy are perhaps even more unappetizing than any plate of Guy-talian Nachos could ever be.”

Voicing support for Petey we have the likes of Eddie Huang, the proprietor of NYC’s BaoHaus and a chef with some public profile of his own (his Vice show Fresh Off the Boat is a thoroughly entertaining web program). In a blog post titled I Read Pete Wells at Night… with no pants on,” Huang says, “He got exactly what he deserves, a shot in the face. And, it puts people on notice. It draws a line in the sand. ANYONE can get it. Why should the NY Times live in this vacuum only reviewing “industry” restaurants? Food needs to be democratized, but to have an efficient democracy, you need an educated populus [sic] … This was the ill McNulty moment when Wells finally indicted all the people who’ve been eating off the proliferation of hot trash. It tells us anybody can get it … you push hot trash on the people, you will get dealt with.”

And landing somewhere in the middle is Saveur.com’s Helen Rosner, who writes in support of Fieri’s mission statement, as displayed on his show Diners, Drive-Ins and Dives: to uphold the sanctity of trashy American food. The thing is, Wells loves that stuff, too, and wants to see it done right. And that’s why, justifiably, he’s cocked the shotgun and fired a couple of shells into Guy Fieri’s chest. Because he cares: “What Pete isn’t saying in his review is what you might get on a surface read: ‘Ha ha, Obviously Shitty Restaurant is obviously shitty.’ What he’s saying to Guy is hey, dude, no one is expecting Le Bernardin here. No one is even expecting Shake Shack. But Guy Fieri is the champion of the terrible-wonderful, he is the guy who lifted the veneer of shame from the chili-cheese-bacon-slaw-dog and taught us … that you can get your fix of soul-satisfying, sort of intimidating, deeply wonderful, calorically-dense, artery-freezing food without having to go to a soul-sucking chain restaurant … that instead we could go to a restaurant that tells a story about its city or region … And then here is Fieri’s actual restaurant … and in its extraordinary culinary ineptitude … undoes every bit of that incredibly powerful, very pro-food, very pro-human-scale action that Guy has engendered.”

Lowbrow vs. highbrow, authenticity vs. cultural appropriation, the virtues of coastal elitism: Surprisingly, this Guy Fieri kerfuffle became a bit more of a nuanced conversation than you’d first expect. Like, when the satisfied patron in the Today show clip (the big fan of the Awesome Pretzel Chicken Tenders) calls Wells “another pompous New Yorker,” well, you could probably sit around parsing that one out for a while. And so it’s worthwhile going back to Wells’s original review and asking yourself: Does he have an agenda? I’d say it’s hard to deny he doesn’t — as many have pointed out, there’s a reason Wells reviewed Guy Fieri’s place and not, say, the Times Square outpost of Bubba Gump Shrimp Co. And that reason is that Fieri stands for something, and so reviewing his restaurant is a way at getting at Fieri as a symbol.

Reading the review after having heard of all the troubles that followed, it comes off as surprisingly un-catty. Yes, the open-letter format might read as unnecessarily confrontational. But at what point does Wells resort to easy jabs? He’s leveling one specific critique after another, focusing over and over on the actual lack of flavor in any of the supposed “Flavor Town” dishes he’s being handed. And so I say “dD you, Pete.”

Oh, and one last voice in the debate. Here’s Dr. Phil, who also appeared on this morning’s Today show to defend Guy. Revealing a remarkable lack of knowledge of, or interest in, the way newspapers — or, really, businesses with various divisions in general — operate, the Doc delivers what he clearly believes is a death blow: “By the way, last night … the New York Times hosted a 160-person party at that restaurant.” And then he sits back and smirks.

So whatever else you might be thinking here, let’s agree on one thing: Dr. Phil is the worst.

Judging The X Factor: Tate Is King, Demi Is All Eyebrow, and CeCe Is Doomed