The Check-In: Chuck Lorre’s Mom Is Traditional, Filthy, and a Lot More Interesting Than His Other Sitcoms 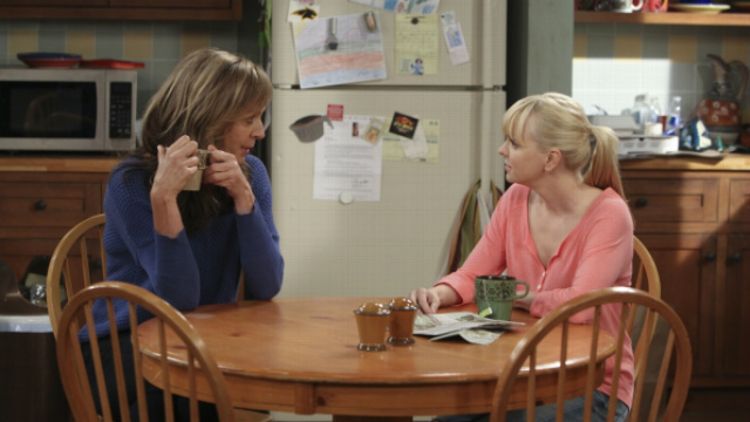 The laziest thing you can say about multi-cam sitcoms, lazier than any of winking double entendres or the Maersk shipping containers of canned laughter that define them, is that they’re old-fashioned. Sure, the filming style and rhythms are familiar. Until about 10 years ago, nearly all network sitcoms were multi-cam, the industry term for a show filmed on a static set like a play, often with a live audience, with three cameras circling the action. And ever since the success of The Office and Modern Family, cool-hunting comedy writers — not to mention cool-chasing TV critics — have glommed on to the faster-paced single-cam (as in: shot like a movie) style as a sign of better taste, not to mention better jokes.

But watching any of CBS’s money-printing multi-cams, from the noxious 2 Broke Girls to the flatulent The Millers, is not akin to stepping back in time. My memory could be faulty, but I don’t recall Lucille Ball ever praising a gynecologist for having hands “like an Asian raccoon.” Where the relatively risqué Seinfeld built an entire episode  around a part of the female body that was never said aloud, Mom ended a recent episode with an 8-year-old bellowing “clitoris” as if it were Pee-wee’s secret word. The secret to megaproducer Chuck Lorre’s titanic success isn’t that his Two and a Half Men and The Big Bang Theory are throwbacks. It’s that they spike the classic sitcom format with ample doses of sex, smarm, and scatology. The comforting, predictable blanket of studio laughter — or gasps, or Charmin-soft awwwws — allows Lorre’s shows to get away with things his supposedly cutting-edge competition never could. No one seems to find any of it objectionable because it doesn’t particularly feel objectionable. It’s Walter Cronkite telling “The Aristocrats.” It’s the sepia-toned version of Man Getting Hit By Football.

Also, it can be kind of funny. It’s useless to compare an episode of one of Lorre’s shows to, say, an episode of Arrested Development. Not only are the goals different, they aren’t even produced in the same language. Multi-cam sitcoms, whether they’re about Friends in a coffee shop or ex-junkies and teen pregnancy, have their own distinct rhythm: beat-beat-JOKE, beat-beat-JOKE. And Lorre, a former musician (he wrote the Teenage Mutant Ninja Turtles theme song; no, really — he did), is a virtuoso of the form. When Lorre’s shows are singing, they can achieve the same melodic highs of beloved multi-cams like Frasier or Will & Grace. But the relentless caterwauling of Men and Bang can too often turn into meanness — or at least too often for my taste. There is something undeniably performative about sitcoms in general: No one’s lives are so relentlessly chipper, so easily broken off into 22-minute bites. But the need for zingers on every downbeat can take Lorre’s more cartoony creations and transform them into monsters. (Is Sheldon Cooper adorably antisocial or a dead-eyed sociopath? Only Jim Parsons’s accountant knows for sure!)

Happily, this trap has mostly been avoided in the early going of Mom, Lorre’s latest offering. The show, starring Anna Faris and Allison Janney as two generations of recovering alcoholics, debuted last month to predictably high ratings and has already been granted a full season order. What instantly sets Mom apart from Lorre’s previous shows is its subject matter; the madcap pace and celery-as-boner jokes can’t hide the show’s tough, wounded heart. Faris’s Christy is barely hanging on: to her sobriety, her sanity, her kids, even her house. (In the latter, the show is absolutely old-fashioned; assumed wealth and opulence is one trend of 21st-century sitcoms I’m all too happy to see fade away.) Her teenage daughter, the touch-too-vinegary Sadie Calvano, is newly pregnant. Her moppish, female-anatomy-declaring son (Blake Garrett Rosenthal) rarely washes and comes strapped with an amiable burnout for a father. (As Baxter, Christy’s second baby daddy, Breaking Bad‘s Matt Jones is doing a fine job imagining Badger in full suburban decline.) Whatever sharp edges Faris flashes are earned. She’s drowning even though she hasn’t had a drop to drink.

The swizzle stick thrown into this sticky cocktail is Janney’s Bonnie. Her character may be newly clean, but the terrific Janney snorts up the scenery with lusty vigor. (“Recovering from the disease of alcoholism doesn’t mean I can’t get some strange on occasion,” she says on the car ride back from AA.) Tough and elegant, she’s the perfect complement to Faris’s fragile, Fabergé scramble. Wherever Mom goes from here — and it can go to some commendably dark places! — it’ll be thanks to the chemistry between its two formidable leads and the minefield of history between them. It certainly won’t be due to the scenes set at the restaurant where Christy works, a locale seemingly constructed solely to give French Stewart, as an asshole chef, a place to drop bons mots more heavily than a Le Creuset Dutch oven. Here’s hoping Mom refocuses on the home front and 86’s Christy’s job. Even though it cost them George Clooney, one of the smartest things the similarly blue-collar Roseanne ever did was ditch the scenes at the factory. And suffice it to say that French Stewart is no George Clooney.

After a few unnecessarily squalid stumbles — someone please tell Hollywood we’re all good on the Justin Long–as-quivering-love-interest episodes, thanks — this past Monday’s half-hour was the best yet. Guest-starring Oscar-winner Octavia Spencer as an embezzling pill-popper, the episode was about Christy and Bonnie using their own tawdry life experiences to help someone else, someone in far worse shape than either of them. (As if to prove she hadn’t yet hit bottom, Spencer’s character is forced to trade her Louboutins for a bootleg Limp Bizkit T-shirt from the back of Christy’s closet.) Unlike most shows about addiction and recovery — scratch that. There aren’t really many shows about addiction and recovery at all. The thing about Mom that keeps me coming back is the way it’s starting its story on the 13th step; it’s about the hard road located just past the previous, harder one. Christy has admitted her addiction, examined past errors, made amends and a new life. Now what?

It’s not a traditional place for comedy, and Mom, even at its filthiest, is plenty traditional. But Chuck Lorre has previously proven his ability to squeeze all sorts of uncomfortable things into conventional framework. It’s just that, in the past, those things tended to be fart jokes. With its cast and pedigree, Mom could easily use similar gas to coast for multiple seasons. Or it could slow down and steer into its many fascinating bumps. It may seem like a counterintuitive thing to say about the most successful man in comedy, but here’s hoping Lorre takes the opportunity seriously.

What the Hell Is on Lady Gaga's Head? An Investigation