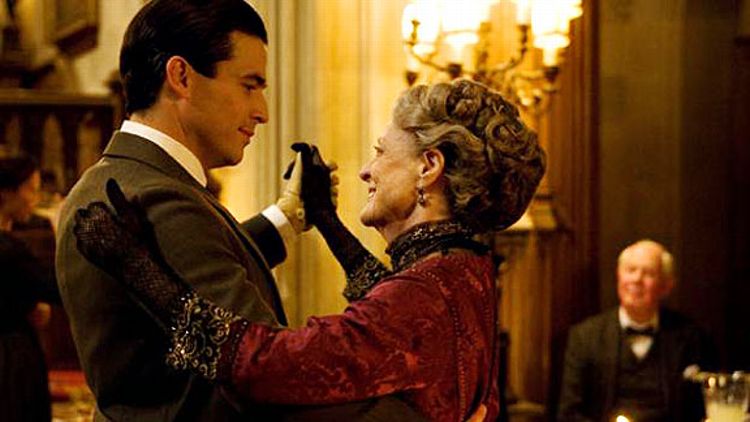 Downton Abbey has been lavishly praised for many things since its debut — the period-perfect detail, the generous gown budget, the ability to suggest that it never rains in England — but a large percentage of the raves stem from the series’ lack of source material. There’s long been an audience for Albionic costume dramas, of course — something Dame Judi Dench and her accountant are no doubt extremely grateful for. But all of the previous bodice-ripping tales that have captivated the colonies have been adaptations, appealingly comfortable but also dramatically limited. The brilliance of Julian Fellowes’ accomplishment with Downton is his ability to tear pages from PBS staples Jane Austen, E.M. Forster, and Virginia Woolf and ball them together into a wholly original creation.

The effect is not unlike what David Chase did, artfully weaving the Sopranos out of stray cultural threads left over from The Godfather and Goodfellas or the effort of that one guy who saw Tootsie while drunk and came up with Work It. (RIP.) It’s one of the pleasures of Downton that we can hum the melody but the lyrics are all new.

Of course, one of the advantages of adaptation is that an established narrative allows for efficient storytelling; characters can pine, faint, flirt, marry, and even die on a reasonable schedule because their arcs have been predetermined. Downton Abbey, on the other hand, despite its novelistic trappings, must play by the rules of serialized television. And thus, as ratings rise and additional seasons are ordered, Fellowes must go to greater and greater lengths to suspend our disbelief and keep these people together — or, in the case of star-crossed lovers like Lady Mary and cousin Matthew and Anna and Mr. Bates, apart — even when all logic or context would suggest otherwise. Already we’ve witnessed Thomas’s Homeric quest to return to Downton, despite being a thief, a soldier, and a total prick; to say nothing of Mrs. Patmore’s miracle eye surgery and Lady Sybil’s desire to leave home and become a nurse, only to turn right around and establish a hospital in her dear papa’s beloved library. And as for Matthew himself, he may be a heroic leader of men, but the exigencies of being the lead in a television program take precedence, meaning he ends up spending more time away from the battlefield than a flat-footed Quaker.

But for now, none of these twisty maneuvers have affected the quality of Downton, primarily because Fellowes, unlike other cinematic types recently reduced to working on the small screen, doesn’t seem to resent the realities of his new medium. Instead, he relishes them, using what could have been a wacky contrivance (the transformation of Downton into a convalescent home for wounded soldiers and their wandering eyes; call it Grantham’s Anatomy) as an opportunity to dig deeper with his characters, drilling into Robert’s bubbling frustration, Cora and Isobel’s catty competitiveness and, above all else, Doctor Clarkson’s rich, charismatic moustache. In lesser hands, jittery Mr. Lang would have been little more than a placeholder while we awaited the inevitable return of moralistic Mr. Bates. But in two episodes Fellowes used the poor fellow to nimbly sketch out a vision of pre-PTSD misery and to add shades of sympathy to O’Brien’s sinister disposition. Despite the prestige presence of Laura Linney, Downton Abbey has always been a soap opera dressed in Edwardian finery. And with the walking wounded waltzing through the front door, the melodrama of war can no longer be ignored — whether it’s the declared hostilities against the Kaiser or the bubbling conflict between the classes. We’re well past upstairs/downstairs; now everything has gone sideways.

Few characters are more flustered by all these changes than the Dowager Countess, despite protestations that she’s “very good at mixing” due to her annual fox trot with Mr. Carson at the Servants’ Ball. Even Lady Edith is put out by the sudden appearance of pingpong-playing amputees in the dining room. Sure she’s flush with recent experience mixing ranks (with her mouth — high five!), but without a tractor to drive, she’s directionless. Until, that is, she discovers the joys of offering a helping hand to the recently handless, realizing her capacity for kindness runs deeper than barn-based cuckoldry. Meanwhile, Branson, the Bolshevik Bentley driver, is deemed unfit for military service, not because of his radical politics but because his heart, which was previously locked away in Lady Sybil’s biscuit jar, is murmuring. He is not, however, unfit for tableside service, and so, desperate for a chance to strike back at the kingdom that killed his brother, he mixes up his own ghastly concoction (involving motor oil and a cow pie) with the hopes of sliming visiting war hero Sir Herbert Scott. Luckily Anna is able to ignore her own murmuring broken heart long enough to discover Branson’s letter of apology (tangled up in Sybil’s dirty laundry, natch) and stop him in his tuxedoed tracks. Not wanting to cause a fur-roar (Carson’s pronunciation swag is off the charts), Branson is given a reprieve (for now) but the same can’t be offered to Mr. Lang, who is sadly dispatched due to his proclivity for night terrors, crying jags, and the inappropriate sharing of Mrs. Patmore’s family business. Her actual family business, that is, not her side work planning other families: Guilt over her own dead nephew causes her to push a doubtful Daisy into the big dumb arms of William so that he’ll have something to dream about from the front lines. (In another clever bit of manipulation, Grantham asks Matthew to hire William as his aide-de-camp, a move that will keep William safe and in front of the cameras and Matthew free from the burden of ladling his own soup.)

As for the lovers, they continue to stagily elude each other’s grasp. Mary, thanks to the machinations of her gossipy grandmother and aunt, is given the ammunition to sink Lavinia’s battleship once and for all: It seems the dewy doyenne was responsible for a recent political scandal due to her selling information to the craven Carlisle. But Mary, like Branson, proves to be a conscientious objector, protecting Lavinia’s confidence and telling Matthew only that his bride-to-be is a “charming person.” As for Mr. Bates, he’s back skulking around the Northeast, throwing chaste, honorable glances at Anna from behind trees and shrubbery. It turns out the villainous Vera has been unfaithful and Bates, being Bates, has decided to take up work in a pub near Downton while he plots a divorce and dreams of his favorite housemaid. Anna, her hair curled and voice coy, suggests that maybe it wouldn’t be illegal for them to polish each other’s snuffboxes anyway. But there are too many hours left in the season and too many scruples in Mr. Bates’s hulking heart for things to be consummated that easily. It may be called “Masterpiece Classic” but it’s still television.

Previously:
NBC Comedy Recap: The Casual Brilliance of 30 Rock
NBC’s New Wednesday Comedy Block: Power-Slurping the Worm of Awfulness
The Office: Can It Be Fixed?