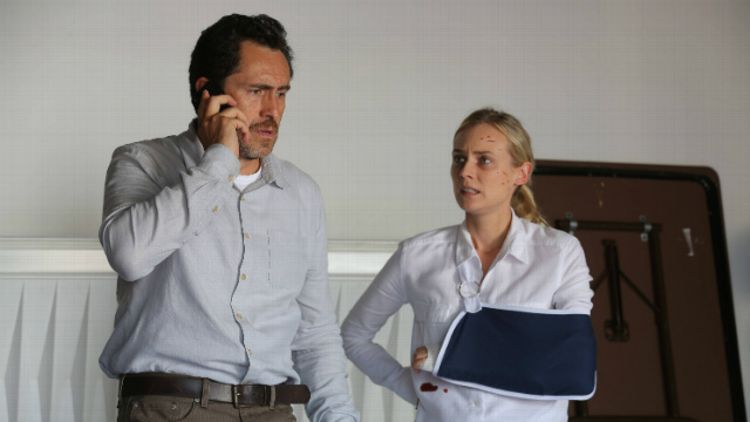 Last night’s episode of The Bridge reminded me of a favorite joke. I won’t bore you with the setup, especially since the punch line speaks for itself: “But other than that, Mrs. Lincoln, how was the play?”

In other words, I was getting serious Mary Todd vibes from “Old Friends.” It was an episode that continued to chase the show’s worst instincts down a rabbit hole — and then slowly fill said hole with water in the world’s least-efficient death trap. But I found myself enjoying it in spite of itself. Look, at this point, I can’t really argue for one version of The Bridge over the other. It’s clear which side has won out and it’s not the one I prefer. Still, everything that caused me to fall deeply into like with this show was still visible last night. It was there in Kitty admiring Sonya’s scrip for Vicodin; Sonya’s dislike of bananas winning out over her perilously low blood pressure; and nearly everything about Daniel Frye’s slow, smart-alecky, and bottle-strewn road to redemption. The problem, as it’s been for weeks, is that these moments were roughly elbowed to the margins by the raging, all-consuming narcissism of a psychopath. With but three hours left in the season, The Bridge has shown its colors. Am I foolish for still trying to watch in black and white?

At times last night it felt like it. Earlier in the week, Alyssa Rosenberg had a smart piece over at ThinkProgress bemoaning television’s current obsession with “masterminds”: geniuses (sometimes evil, sometimes not) who are less characters than they are a rough jam-up of deus and machina. Masterminds serve the necessities of plot far more than they do the interests of the audience; their presence helps showrunners achieve big aims without sweating the small stuff necessary to get there.

The emergence of A-1 Mastermind David Tate has robbed The Bridge of many things, but chief among them is that wonderfully haunting sense of nuance, foreboding, and doubt that wafted through the early episodes. At the outset, The Bridge quite rightly (and very admirably) treated its setting not as a strict dividing line between two worlds but as the fluid and swampy space where those two worlds spilled into one another. I loved how the show considered both the tangible results of the violence on both sides of the border and the murky, amorphous origins of it. Sonya clung to the rules and Marco bent them but neither’s ideology provided them much insight or relief. They were both immigrants in a strange land, brought together by circumstance, scarred by experience.

Now all of that has been tossed out the window, at least for the time being. As I’ve written many times, I’m sympathetic to the thought process here. Unless your name is David Simon, “murky and amorphous” are hard adjectives to sell to a network and even harder to pull off — sometimes even if your name is David Simon. And it’s a relatively reliable rule of storytelling that the personal trumps the political, though I have to say one of the things that impressed me most about The Bridge was the way its politics were so impossible to untangle from the people we met along the way. Now, everything is personal. All the bodies, be they American or Mexican, were just collateral damage in one man’s overwrought campaign of revenge. This robs every single one of them — from the desperate migrantes to poor Gina, the runaway teen — of their dignity in a way that feels cheap and unbecoming of a show that went to such pains to humanize each of them in the first place.

This is a real shame. In their oddly impotent confrontation at Franklin Mountains Park, Tate made a passing reference to crazy Jack Childress and his wild ideas about Mexico. The problem is, Jack Childress’s wild ideas about Mexico are actually infinitely more interesting than Tate’s lack of ideas about anything other than his own vendetta. (Childress may have been a nutty doomsday prepper with a thing for guns and racism, but he seems a lot more plausible to me than a gently bearded assassin who faked his own death before launching a six-year, cross-border long con based on murder, cuckoldry, and iPhones.) This leads The Bridge into some unfortunate terrain, where Marco is forced to footnote his own fury with references to The Big Picture. “You’re not the first person to lose everything,” he yelled. “Over there it happens every day. People have their lives ripped away from them. It doesn’t make them killers.” This was telling, not showing of the lowest order and Tate’s reply was even worse: “Maybe I’m special.”

He’s not. Murderous masterminds are like snowflakes: All of them are boring in their own, special way. Which makes it all the more frustrating that all of The Bridge’s wonderful characters are so completely in thrall to him. Demián Bichir does anguish as well as anyone — anguish that seemed particularly earned when his wife showed no real emotional fallout from having been seduced by a serial killer — but the magnitude of Tate’s crimes have robbed Marco of any culpability; they make his own moral failings seem minor in comparison. And Diane Kruger took her fascinating physical portrayal of Sonya to another level last night. The way she lurched and bled reminded me of Michael Fassbender’s performance as an android in last summer’s Prometheus: He still acted like he wanted to be human, even when a 9-foot alien had ripped off his head. (“She’s probably pretty pale,” Tate mused about Sonya. Dude. She’s a German model with skin made entirely of alabaster and Oil of Olay. She’s always pretty pale!) I loved the new parameters of their partnership, the shifting lines of truth and trust, as summed up by Sonya: “I can’t say we’ll find him but you can’t say we won’t.”

And let’s pour out all the liquor in our apartments, bathrooms, and desk drawers for the work of Matthew Lillard last night. It’s not particularly hard for an actor to play an asshole; either it comes naturally or it just requires a few minutes of character study in the waiting room of any major agency. What Lillard does so well — what he’s made a remarkable second career out of doing — is playing both the outward snark and the deep, inner hurt. His Daniel Frye is a man who has ingested far too many Scooby snacks for his own good, but has fundamentally lost both interest and faith in the existence of that good. I felt like there were a few connections left dangling in the scene between Adriana and Daniel; are we to assume he learned about his former drug buddy’s death offscreen, thus precipitating his latest binge? But Lillard’s work made my nitpicking irrelevant. The way he related the story of how he was bought off was remarkable in its bluntness, its lack of actorly vanity: “I said yes … I said yes so fa — I didn’t even hesitate.” In this moment, neither did Lillard. It was a straight shot, no chaser. He was even better in the AA meeting, using alcohol not as a stimulant but as a solvent, melting away his façade and his pride in a single speech.

But then he, too, was swept up in Tate’s funny games. And the audience and the show itself have also been immobilized and are now along for the ride. (I don’t have much to say about Charlotte’s rough trade assassination of her prom buddy Ray out on the set of the Smashing Pumpkins “Today” video. It seemed harsh but it was meant to be. Let’s see where it leads.) At this point, I’m less curious in the resolution of the Marco/Tate war than I am in seeing how the show will pivot from the fallout of that confrontation to potential future seasons. The fact that it isn’t doing so well by this serial killer plot may seem like a fatal blow but it’s not, mainly because its bones alone remain stronger than most of what’s currently on the air. I still think The Bridge can be a successful, even transcendent drama series. It just depends on what kind of series it would like to be.