The Bridge Recap, Season 1, Episode 2: The World Gets Wider and Weirder in ‘Calaca’ 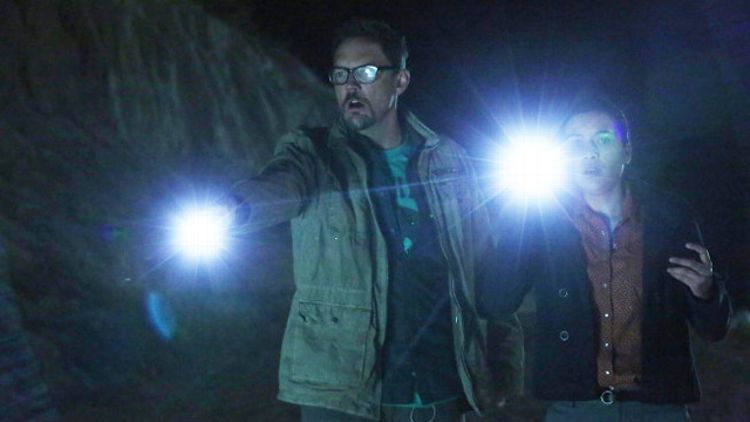 Steven Linder has sideburns as flat and hairy as beaver tails. He speaks like he’s got a tin can of Skoal wedged under his tongue and he possesses the social graces of a wet mop. One would be hard-pressed to trust a guy like Steven even without knowledge of his extracurricular habits, some of which include automotive human smuggling, clothes arson, and applying Band-Aids in the creepiest way imaginable. Steven’s the sort of guy who dreamily wonders if a brutally murdered woman “had it coming.” Some of his best friends are vultures.

Yet despite all this, I’m fairly convinced that Steven — as played by the chameleonic Aussie actor Thomas M. Wright, last seen romancing Peggy Olson in the incredible Top of the Lake — isn’t a bad guy. Or, to put it plainly, he’s not the bad guy of this debut season of The Bridge. I say that not because these first two episodes have worked so hard to make him a suspect (thus defying the law of obviousness) or because he held Eva Guerra’s burning cell phone with a confused expression last seen on Unfrozen Caveman Lawyer (thus making him unlikely to be the tech genius sending the police-hectoring Snapchats) but because of a small thing he did the very first moment we made his acquaintance. It was in the pilot, while the two bodies were still on the bridge — back when Detectives Sonya Cross and Marco Ruiz were still under the impression that there was only one body. We caught a glimpse of Steven on the streets of Juarez, furtive and looking for something. But before he found that something — and then shoved that something into the trunk of his blue car — he took a moment to do something else. He picked up a cigarette butt, gently extinguished it, and slipped it into his coat pocket.

Now, now, you say: Being mindful of potential evidence is the sign of a truly master criminal. Normally, I’d agree with you. But very little is normal in the world of The Bridge; it’s a place where cops play poker with cartel bosses, where 23 bodies become 22, and where women who look like Diane Kruger go cruising for strings-free sex. Once you sift through the serial killer shenanigans and the three-bean salad, the story of The Bridge is, at its core, really about littering. It’s about how one country’s insistent policy of NIMBYism has created a backyard brimming with corruption and bodies. And about how residents of El Paso (2012 murder rate: 16) can look at the situation across the river in Juarez (2012 murder rate: 1,955) the way a harried commuter glances at a car wreck on the other side of the median. America has an insatiable thirst for cheap labor and for even cheaper illegal drugs. The bill for all that discounted desire has to come due somewhere. The fact that Linder didn’t add to the thoughtless litter has colored my opinion of him. He’s not necessarily on the side of the angels. But at least he’s not on the sidelines.

The fact that I’m musing so deeply on something that occurred a week ago is probably significant. Showrunners will tell you that, other than coordinating the writers’ room lunch order, there is no greater challenge than the second episode. Pilots are sweated and fretted over ad infinitum; they must introduce a world and sell audiences on setting up stakes there. When all the work is finally in the rearview mirror, suddenly there’s a grateful network saying “Great, now make more.” The drop-off between the pilot of The Bridge (which, suffice it to say, I loved) and “Calaca” wasn’t particularly steep. There’s just a natural adjustment period when a project shifts from the razzle-dazzle of the first chapter into the more workmanlike TV of the second. What producers Meredith Stiehm and Elwood Reid did well here, I thought, was not to try to climb the mountain all over again for a second straight week. Instead, they — like the poor, doomed migrantes — tried to find another way through.

And so the world of The Bridge got wider and, in some cases, it got weirder. It may seem perverse, but the part of this show that interests me the least is the serial killer at the center of it. I can’t help but shake the feeling that Stiehm and Reid are using the conceit — borrowed more or less intact from the original Danish series — the same way the killer himself is using his iPhone-powered stunts: as a way to get attention for a deeper message. So it was telling, I thought, that we began this week not with any murderous fallout but with Annabeth Gish’s Charlotte Millright discovering the cross-border tunnel that runs beneath her late husband’s ranch. This was supremely spooky, the way the flashlights illuminated the dusty rocks and dank earth. Was the tunnel meant to suggest a hidden vein or a secret sewer? Either way it hinted at future plot points far more interesting than stagey killings or organized power outages. The Bridge of the Americas isn’t the only thing that connects these two cities, these two countries, these two universes. The border is indefensible above and below.

And how about Lyle Lovett, beamed in from some strange, sunbaked John Sayles movie or David Lynch dream sequence? I actually loved how jarring his scenes were, as if he had been given a completely different set of directions than the more straightforward Gish. After all, she’s a newly moneyed former hostess from Tampa. Lovett’s Monty P. Flagman (!) is an old ranch hand in this part of the world. Just because he moves slowly and carries a big hat doesn’t make him any less dangerous.

Many of The Bridge‘s scenes contain this sort of divide, between those who know and those who should know better. It’s there between Ruiz and Cross, of course. It was fascinating to watch how Demian Bichir can play so many shades of the character already, from the affable, rule-bending colleague in Texas to the skittish, unintentional boat-rocker he is forced to be in Juarez. I’ve been wondering why, exactly, Ruiz felt compelled to take the lid off of that particular box with his new partner, the one that revealed how his own captain had disappeared the body of Fausto Galvan’s brother. (Fausto Galvan, it should be noted, was seated at the poker table with the good captain back in the pilot.) Was Ruiz making a mistake about Sonya’s discretion? That seems unlikely; he’d already seen her taking notes in an interrogation like she was cramming for the PSATs. Or was he using her the way a drunk might occasionally hang out in bars, to make the inevitable slide seem like a fait accompli? The best part of Bichir’s performance is how he just can’t seem to help himself. He’s the lab rat that can’t help but reach for the cookie, despite the electric shock. I believe that he’s deadly serious about the threats to his (inexplicably still growing!) family. He doesn’t want to mess things up. But he does want to do his job, even if that means putting aside some very bad thoughts for a very short while.

The same dynamic is playing out, in miniature, between the reporters Daniel Frye and Adriana Mendez. His drunken bluster is hiding something, likely the very sort of darkness that the tenacious Mendez is in too big of a hurry to discover for herself. I’m biased, of course, but I appreciate any show that gets the dynamics of journalism even a little bit right, and Frye’s brief scene with his editor accomplished so much, so quickly. “They lie” is what Marco Ruiz said of reporters, moments after lying to one himself. Really, they’re all just bloodhounds of a different stripe. Everybody here seems desperate to get at the truth but equally afraid of the consequences if someone else should get there first.

(Also, did you notice how much backstory was included in Frye’s editor’s question about not seeing him “in any meetings lately”? Immediately I imagined a promising, if tabloidy, career in New York drowned in drugs and drink and, eventually, a lifeline tossed from a similar survivor at a podunk paper in a smaller town. Good writing is very often the absence of too much writing.)

Going from viewer reaction, the most problematic part of The Bridge for many seems to be Sonya herself, and I can’t say I’m surprised. Asperger’s, even undiagnosed or dwelt on, is a weirdly trendy feature for dramas these days, like a GPS on a new car. (In this case, it is also borrowed directly from the original series.) I’d just as soon have seen Ruiz paired with a tough, socially blunt Texas cop without any particular condition because, at least at first, it runs the risk of coming across as a gimmick when a show with bones this strong — and this evident — doesn’t need one. That said, last night’s glimpse into Sonya’s personal life worked for me. It’s one thing to see her quirks in relation to others — the way she seems to carry a chill into the office with her like Bobby Drake entering Xavier’s Academy; the way she never seems to blink, not even when face-to-face with the amusing, migraine-suffering deputy under the unforgiving Texas sun — but another thing entirely to see her in her own natural environment. Everything in her studio apartment was regimented and bland, from the noodles she warmed in the microwave to the water she scooped out of a bowl. When, after a long night of note-cramming, she ran a hand down her pants, it seemed like an android running a self-diagnostic. The verdict was that she was, despite (or because of?!?) her bedtime reading, sort of horny. And her subsequent thinking in that particular situation was downright logical. I mean, sure, she could change the oil in her car herself, but why do that when it’s so easy to grab a mechanic who’ll do a better job?

What keeps me so optimistic about The Bridge is the way it seems committed to telling the small stories that, together, make up the big ones. So we saw the journey of the cartel killer on the hunt for Eva Guerra, from the streets of Juarez to a murderous encounter in Steven Linder’s apartment building. And, most horrifying of all, we tracked a ragtag group of would-be immigrants from their time spent clustered in the back of a cattle truck like so much meat and refuse to their despicable slaughter at the hands of someone trying to make a larger societal point. There are dead bodies both north and south of the border on The Bridge, as there are in life. But in both cases, the numbers, like the scales of justice, are heavily weighted toward one side.