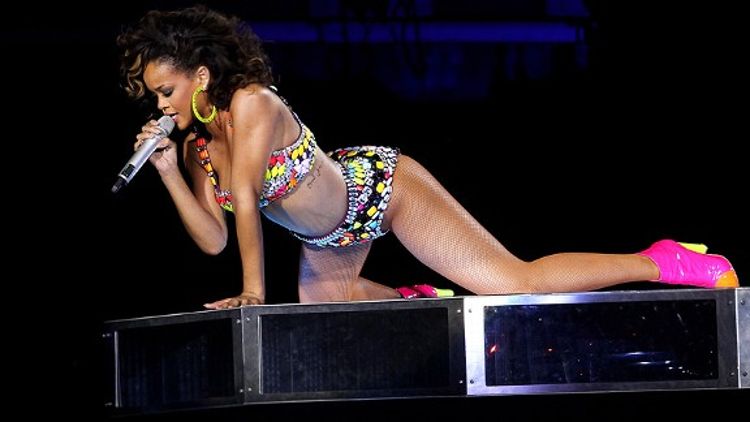 Bullshitting is an art, and like most arts it aims to impress and induce admiration. It’s not exactly lying, more like invoking possibilities. Things that might not happen but could. It’s embellishing things you want to do, and might do, leading through suggestive allusions and purposefully leaving out any information that would weaken your case. It’s not making the shot. It’s pointing at a target and saying “I could make that shot.” It is performative confidence, the feigned bravado that enables real bravado. Exaggerating a skill and then successfully channeling it in the moment. Three places you will find bullshitting taken to its limitations of beauty and absurdity: (1) rap, (2) sports, (3) the Internet.

Rihanna is not being tied up and spanked every night, even if she tells reporters that she’d like to be. “Rihanna” is an amplified image of an archetype: the pop star as empowered sexual libertine. Rihanna herself is a hardworking performer. She doesn’t have time to have sex as often as she sings about having sex. That’s presumably why she sings about it so much. She describes and fills out an alternate coexistent realm, the interior fantasy life, which stands like a spare cluttered closet in the mind to be opened mostly at night. Touring musicians in general don’t have as much time for groupie hijinks as we are led to believe, because the rigors of touring prevent all but the briefest encounters.

The new pop stardom is being aware of the disconnect between a star’s actual life and the one they project to the world, and pointing it out to fans. The larger-than-life image is balanced with a down-to-earth deflation of it. Stars like Lady Gaga, Kanye, Katy Perry, and Nicki Minaj create bombastic self-definitions, then laugh about them on Twitter and talk shows. It’s a clever way to have it both ways: perfect, invulnerable god and relatable girl/guy next door. When Kanye opened his Interview magazine interview of Riri with a question about how it feels to know she could turn straight women gay, Rihanna responded, “Is that a real question?” Kanye of all people should know better than to believe what a performer tells us about themselves while they’re performing.

Talk That Talk is “masculine” the way Drake’s Take Care is “girly.” Rihanna is a stubborn Ernest Hemingway insistent on bagging the biggest game possible. And yet the more sexual her image gets, the more she publicly says she is not actually getting laid very much. That Esquire‘s “Sexiest Woman in the World” seems to have trouble dating is comforting and confounding. Rihanna, whom every person with a pulse would like to tongue bathe, can’t just pick up a boyfriend? What is life? She tends to emphasize “aggressive” whenever she’s asked what she wants in a man. If Drake’s Take Care is a veiled message suggesting that he understands her need for aftercare, it seems unlikely that she’ll take the bait.

When Jay-Z makes reference in “Otis” to putting models into cabs, it’s both overt bullshitting (we know he’s not doing this, or we don’t know, but we assume that if he were he wouldn’t rap about it because he is ostensibly faithful to Beyoncé) and the future-tense gray area spoken of earlier. He could still put models in the cab if he wanted to. He asserts his power by suggesting the sheer possibility. Likewise, Rihanna could theoretically be picking up a different person every night and exploring new frontiers in algolagnia, but she is also emphatically telling us on Ellen that she is not. The fantasy of infinite new sexual partners differs from the reality of it, just as all fantasies, which sprawl and spiral and play out infinite ways in the absence of action, differ from concrete realities, which happen one way and cannot be altered after that. What seems at first like never-ending possibilities (“I wish I could fuck every girl in the world”) soon becomes a tangled, incestuous web with recurring players and crossover plots (“No matter where I go, I see the same ho”).

There’s a great part in Stanley Booth’s The True Adventures of the Rolling Stones where he interviews a couple of groupies who have just slept with Mick Jagger at the height of his pillow-lipped powers, circa Exile on Main Street. When asked how it went, they kind of shrug and say it was okay, nothing like they expected. Pressed further, they say that backstage Mick Jagger bore little resemblance to the onstage one. In front of the lights he was bigger than any man, male sexual charisma itself. Stripped of his top hats and robes, he behaved like a shy British schoolboy. They say he attempted to “act sexy” a couple times and it just made them laugh. A person, no matter how many glamorous ideas are threaded through his name, is merely a naked body at that point. Images are imbued with meaning through context, and looking at somebody up close is just not the same thing as seeing them projected onto a screen.

Talk That Talk is R&B for the porn-tube age. The world may judge a sexually intimidating female presence differently from a male one, but Rihanna is trying her best not to give a fuck. She told Rolling Stone this summer that the Chris Brown incident made her want to put her public guard up harder than ever, to seem closed off and invulnerable. She also posed on the cover in sequined cutoffs while admitting in the interview that she hadn’t had sex in four months.

Throughout Talk That Talk, while she’s not pleading for real love in the ballads, Rihanna meditates on possibilities of sexual power and control from an emotionally detached throne. The aggressive exhibitionistic dance-hall queen side she burnished to a lustrous sheen in “Rude Boy” and “S&M” plumps up the best cuts (“Cockiness,” “Talk That Talk”). But the ballads — unfortunately dishwater-tepid modern pop-rock fare — fall flat. She displays more of her body verbally than ever but less of herself — 2009’s Rated R remains her best and most cohesive album.

The video for “We Found Love” struck yellow diamonds on the Internet with its savvy combination of themes from the last twenty years of overpriced, cool, glossy UK fashion magazines: raves! Sex! Rockabilly! MDMA! British kitchen-sink dramas! Skaters! Young people! Denim! The narrative’s romanticization of a passionate, abusive (presumably pseudo-fictional) relationship takes off just like the sparklers in the clip, despite the corny narration and occasional overstyling. It bangs on the proper brain receptors like a council house Wuthering Heights. One last hit of Euro-techno euphoria just as the sun starts setting early for the winter over leafless trees.