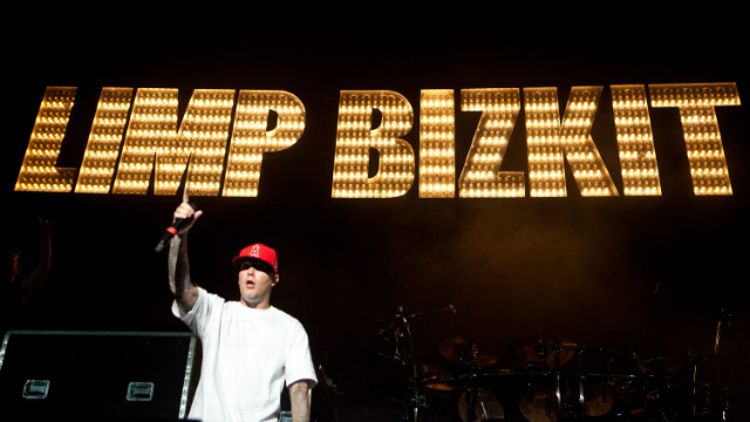 “He’s a visionary, he a great artist … He’s a movie director, he’s a one-stop shop … whatever direction he wants to go in his music, he knows it. It’s hot.” —Birdman, on Fred Durst, whose band Limp Bizkit signed to Cash Money Records last month.

“It sounds like a monster; it literally sounds dangerous. It sounds like that left of center, that place of discomfort that created rock ‘n’ roll, created the metal, where it all spawned from … [Limp Bizkit’s upcoming album The Unquestionable Truth Part 2 will be] the heaviest, most crazy metal record of all time.” —Fred Durst

“The Bizkit is back bitches, keep on hating all you want :)”
—YouTube commenter s0ccer96

Who has done more with less than Fred Durst? He can’t sing. He can’t rap. That little pinched goatee that used to cover the lower half of his face is gone now, but is still the stuff of nightmares. And yet his band Limp Bizkit — the Jacksonville, Florida, quintet that defined ’90s rap-rock, the most hated sub-genre of the last 20 years — remains relevant enough 17 years after its founding to sign a deal with one of the biggest hip-hop labels around. As Cash Money’s Birdman tells it, it was Durst who initiated the contract: “He was like, ‘Stunna, what’s good?’” I was like, ‘What’s poppin, 5?’ [Fred said] ‘I wanna join the team.’ Whoa! For real? He didn’t have to say it twice.” Through every interview he’s done about the Bizkit deal, Birdman has managed to maintain this exact level of effusiveness. As far as I can tell, the no. 1 Stunna truly sees this signing as a timeless Cash Money coup.

You could, then, if you wanted, chalk up Limp Bizkit’s latter-day non-irrelevance to Birdman’s terrible taste in rock music. (After all, as any one of the man’s solo albums attests, he does possess some terrible taste.) But Cash Money’s longevity and continued commercial success, via Young Money’s roster, speaks to the fact that, if nothing else, Birdman knows how to run a company. Meaning: He sees Limp Bizkit as a solid investment. And it’s not like Durst and his dudes were floundering on obscure Eastern European labels run out of drafty warehouses half-full of original-recipe Four Loko before Birdman hooked up the deal. Believe it or not, for their entire 17-year run — over which they’ve sold, ahem, 33 million albums — Limp Bizkit has enjoyed the major-label support of Interscope Records.

That was not the preordained fate of Fred Durst. Our dude was a punchline even while he was on top of the world; he was supposed to fall, hard, into that sad, shamed, purgatorial state of Celebrity Rehab-esque obscurity. He was not supposed to be palling around with Lil Wayne. That he has clung, cockroach-resilient, to a mainstream music career is objectively admirable. To say that he can’t sing or rap is not to say that he has no discernible talent. His talent, in fact, is obvious. His talent is survival.

“He is a slick careerist, one who moved to Los Angeles without his band to better his glad-handling possibilities. He’s immensely attracted to power and celebrity, and aspires one day to schmooze with the best of them. Consider his description of his ‘close friendship’ with head of MTV production Dave Sirulnick, whom he met at an MTV event in Tennessee last year. ‘Dave needed a ride on our plane down to New Orleans, ‘ says Durst, and I was like, ‘All right, I’m a salesman here.’ I sat next to him and just started pouring my shit on him. I let him see my vision and how driven I am.” —Zev Borow, SPIN, 1999

I was in high school in 1999, squat in the Limp Bizkit demographic, when Fred Durst was being sold as a contemporary cultural icon. Obviously, snobbishly, we rejected him. High school is when you’re supposed to be really into backback hip-hop, and I was, and hating Durst for his rap skills alone was dumb easy. And then you add his guitarist Wes Borland, with his tinted contact lenses and bunny outfits and a general shtick that goes against everything you consider, because you don’t know better yet, “real music,” and shitting on Limp Bizkit becomes a wholly satisfying experience. OK, here comes an embarrassing disclosure.

I was in a band in high school called Close Combat. We were really, really terrible. We wrote a Limp Bizkit diss song. It was called “Fuck Limp Bizkit.” The chorus went “Fuck Limp Bizkit … except Lethal.” I guess we felt DJ Lethal’s House of Pain credentials saved him from our scorn? It’s a much longer story that I’ll gladly bore anyone with in person, but the fact was that Close Combat, despite out best intentions, sounded like a shitty rap-rock band, and the only way we could distinguish ourselves, in our mind, was to lash out with aggression. I believe they call that “hating.” (That said: We won $74 for a second-place finish in a talent show once.)

Why did we care so much? Part of it was the Limp Bizkit overexposure, I’m sure, and the fact that in high school you just kind of need stuff to hate. But I’m glad that now, upon his return, I can appreciate Fred Durst for what he is, and that is a classic American character: He is a hustler, and an overachiever, and he has fully maximized his paltry talents. But he is not a huckster. I believe that he loves the music that he makes, and loves that he’s allowed to make it, and that he takes the opportunities he was given seriously. In the time since you last heard about Limp Bizkit, there have been no arrests, no drug issues, no embarrassments of any kind. The band has continued to put out albums and to tour. He also directed two movies, including The Education of Charlie Banks, which starred Jesse Eisenberg. Young, naïve Eisenberg has, apparently, never heard Limp Bizkit, and so can appraise Durst with clear-eyed sincerity. And Jesse says, “He’s like anyone else who’s successful; they work very hard at what they do.”

Later in that SPIN article, Durst describes his then-new L.A. life in the most obnoxious way humanly possible (for the record, I found the article on Google Books. It’s not like I have moldering stacks of back issues of SPIN just lying around my apartment. Those are at my parents’ house):

“I can be at dinner and happen to run into a director or producer. That could lead to another album or a movie or someone wanting me to do a sponsorship with Calvin Klein clothes. I mean, if I were to try to tell people from home, ‘Dude, last night I was at Goldie Hawn and Kurt Russell’s house kickin’ it with Jim Carrey, and Jim was touching my arm and fucking with me about my tattoos, and Garry Shandling was saying all this funny shit’ … ”

You know how people work extremely hard to get famous and then get entitled thanks to their natural beauty and talent and then hate being famous? Limp Bizkit’s new Lil Wayne-featuring single, “Ready to Go,” will be officially released at some point in the next few weeks. There’s a lo-fi recording of it available now, and it’s definitely not terrible enough that it’s impossible to imagine it charting respectably. And if it does, it may bring the Bizkit the kind of fawning attention they enjoyed so readily a decade ago. At that point Fred Durst may once again find himself out one night, at a celebrity’s house, having yet another celebrity touch and appreciate his tattoos. And you can bet your ass that Fred Durst will love every second of it.

Should You See It? A Curious Consumer's Decision-Making Guide to The Hunger Games