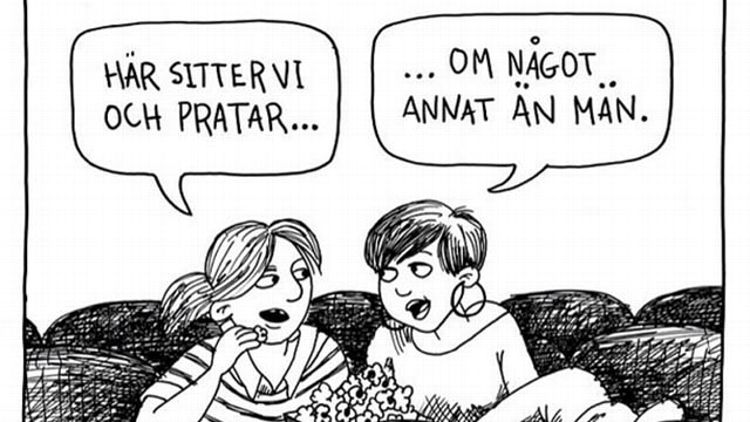 Happy Let’s Move to Scandinavia Week! (Although, as Grantland deputy editor Dan Fierman reminds me, “That’s every week.”) The Guardian is reporting that a handful of Swedish cinemas have begun employing a rating system to determine the gender bias of films, a label that will be slapped right alongside the regular content ratings to help moviegoers determine how much patriarchy they’re in the mood for in their Sunday matinee. The ratings system uses the Bechdel test, the measure of female representation that has been frequently name-checked by film critics since it was introduced by feminist comics artist Alison Bechdel in 1985. An “A” rating means you’ve got more than two female characters talking to each other about something other than a man, and the gender representation goes down from there. Only four theaters have actually started using the system, but the Swedish Film Institute is all for it, and a cable movie channel has also started to use the gender ratings in its listings.

Does the system have its detractors? Of course, but this is Sweden, so much of that criticism is over the test’s shortcomings as a measure of positive representation. (Gravity, for example, fails the test because there are fewer than two women, while Oliver Stone’s Savages passes with flying colors. I watched Savages the other day on Cinemax; to its credit, it does have the steel ovaries to use Blake Lively as a voice-over narrator.) Says film critic Hynek Pallas: “There are far too many films that pass the Bechdel test that don’t help at all in making society more equal or better, and lots of films that don’t pass the test but are fantastic at those thing.” Agreed. So we should probably work as a global film community to make a more holistic gender-bias rating system, right? Just for laughs?

Then, of course, there are the free-speechies, who are particularly miffed that a government organization like the Swedish Film Institute is signing off on this endeavor. The state should not mandate gender inclusion in the wild, wonderful world of art and human expression, sayeth the free-speechies. I dunno, our normal sex-and-violence ratings don’t seem to stop films like The Counselor from getting made (Bechdel grade: B), and thank heavens for that. Content ratings are just that: ratings. They aren’t measures of quality, they’re measures of quantity (of boobs, both empowered and otherwise). A Quentin Tarantino fan is not going to skip out on Django Unchained just because its F grade is glaring at them in the lobby, but maybe they’d think more about that F as they patiently wait for Kerry Washington to get a line. It’s like the increasingly widespread calorie display at fast-food chains. Get that Double Super Bacon Cheeseburger, by all means. Get it in your insides. But know that when you get carted out of Carl’s Jr. on a gurney, there was some cause and effect in play there.

I will bet a large sum of money that nothing remotely like this reaches U.S. shores before my generation shuffles its mortal coil, but anything that makes noise and pisses off the right people gets an A-plus on my RAGING FEMINAZI test, even if the system is far from perfect. Now if you’ll excuse me, I’m off to use said large sum of money to invest in some fjord-side real estate.

Do You Like Prince Movies? Podcast: Homeland and Matthew McConaughey