Survivor: Caramoan, Episode 7: The Will of a Lion and Determination of a Gorilla in ‘Tubby Lunchbox’ 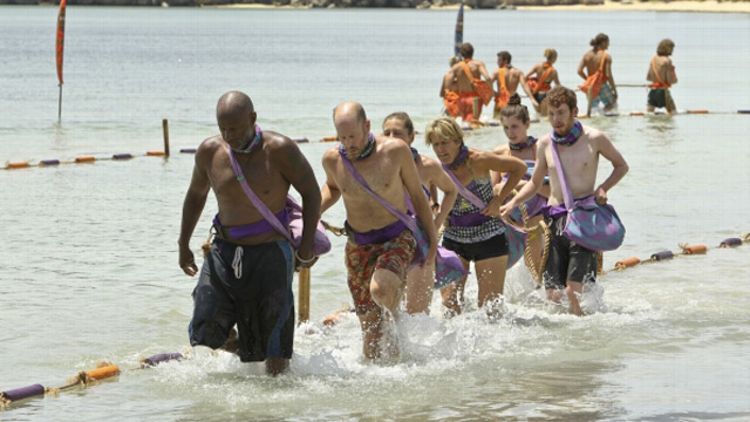 My dad was dying to spoil this episode of Survivor for me from his sofa in Eastern Daylight Time, but I wouldn’t let him. Though I could intuit this was not going to be a curveball episode, I was still worried about my strange buddy Phillip Sheppard, whose days are clearly numbered. A fellow Grantlander e-mailed a few of us Survivor fans asking us to explain the Special Agent, and while I got into how Sheppard is kind of like David Brent with a Special Ops folder standing in for the lyrics to “Free Love Freeway,” someone else succinctly nailed it with “Sure, he’s fucking crazy.” He is, obviously, and I wouldn’t want to share a few cubic feet of island with him or anything, but I couldn’t stand to see him go just yet. I was in luck.

The shabby purple folk of Bikal return to their camp a little depleted after losing Longbeard. They’ll miss Longbeard, particularly Michael, who shared a special floating alliance bond with him. Forgotten Julia mentions that she “nearly peed [her]self” at tribal council, but then evaporates, leaving only a puddle in her wake. Corinne, mad about gays, continues to heap love on Michael as they converse over the fire in plain view of Sheppard, who grows paranoid. He grabs Cochran and breathes down his neck, whispering that he wants Corinne gone before they merge. Cochran says that it may send the wrong message to Gota if they turn on their alliance so quickly, but he’s become super-adept at dealing with Sheppard and remains diplomatic enough that Sheppard leaves the conversation satisfied, while Cochran smirks to the camera, presumably covered in little droplets of Special Agent sweat. The following morning, Dawn reads a tree-mail that mentions the strong carrying the weak in the rewards challenge. While the rest of the tribe hopes against hope that this challenge will somehow allow their collective weakness a chance to shine, Phillip is excited to show off the superhuman strength of his “upper body, upper back [and] shoulders.” His strength is “deceptive.” The pecs are undercover, but they’re in there, coiled and ready to spring out of his chest. To prove this, he challenges Cochran to an arm wrasslin’ match, which Sheppard dominates (obviously). He supports Cochran’s entire body weight, probably 20 pounds or so, and then rolls over, exhausted and exalted, an even more overconfident man. His asset is his “will of a lion and … determination of a gorilla” (see arm tats), and bolstered by this show of strength, he struts into the immunity challenge like a rhino with a trio of falcons riding on its back waving little American flags.

The rewards challenge is the old sandbags shuffle: Each tribe clips themselves onto a rope together, then trudges around an oval course, each wearing a 20-pound sandbag, until they catch up with the other team for the win. If one of them gets tired and has to excuse themselves from the challenge, his or her weight gets passed to a teammate. The reward is a trip to a coffee bar with mad pastries and espressos and brownies ‘n’ thangs. Malcolm is in charge of strategizing for Gota (Reynold wisely advises everyone that if somebody dies, they should stop walking), leading their chain with Erik, and Sheppard takes over for Bikal, placing himself at the head of the line. While Gota marches around the track like a choo-choo train of young athletes, Sheppard keeps his team from running because “the girls will tire.” Michael and Corinne are champing at the bit to place more air between their team and Bikal, but Sheppard keeps making excuses until finally admitting that he’s too tired to speed up (peew, peew, there go the falcons). Dawn, who drops out and gives her sack of sand to Corinne, warns her tribe that Gota is approaching from the sideline, but the chain is paralyzed by Sheppard’s pace and nobody can do anything. Jeff Probst acknowledges the strangeness of this strategy, and Brenda, who was sidelined by Gota and spent most of this challenge contending with team spirit jumping beans while standing on a platform, waggles the end of her braid around in the air and parrots, “It’s a strange one!” What a jerk, seriously. Finally, Sheppard collapses and Bikal is put out of its misery, losing as we always knew it would. Bitter Dawn consoles the rest of her team by telling them, “They’re going to get sick. It’s not a big deal. That’s a … diarrhea fest.” That’s gross, of course, but it’s a thought that can’t have been far from everyone’s minds when espresso is brought up in the context of a bunch of starving people who run, sweat, and exist solely on beans and rice. Dawn has been worn thin by this group, with all of the Hantzing and Shepparding, and gets as mean as she’s probably ever gotten to camera when she almost calls Sheppard arrogant for leading his fellows to their defeat. Sheppard seems to think that they’ve just lost immunity, and his spirits lift when he realizes it was just a reward. Even lions have brain farts. Corinne disses Sheppard’s physique to camera, then bitches to Cochran about how badly she wants to snuff his flabby torch; Cochran is just focusing on keeping his alliance together and proceeding with the plan of voting the fans off first. These rifts are harshing his mellow, and he can’t understand why everyone can’t just agree to get rid of Forgotten Julia, who is “a vanilla personality, but [that’s] a great disservice to the flavor vanilla” because “nobody’s clamoring for anything [Forgotten] Julia flavored, except” Sheppard. And Sheppard does scream for Juliascream: He’s hard at work recruiting her as his double agent, despite the fact that Forgotten Julia thinks he’s nutballs. Forgotten Julia can’t help but tell Dawn about Sheppard’s plan to take her along with him in a new alliance post-merge, and Dawn immediately reports back to Phillip because, well, who is Forgotten Julia at this point but a handful of mumbles and a snack pack of mirages? Sheppard reacts just as you’d expect, calling Forgotten Julia an idiot and calling this her last “foo pas.”

Victorious Gota heads to an exotic pop-up café, all lit up with expressive hand gestures and the promise of coffee, stuffing themselves with muffins while Malcolm blesses each of them on the head with a kiss. Andrea is glad to get a chance to bond with the poor fans, who hadn’t won a reward up until this point, and Reynold can’t help but confuse the coffee and cakes for something that reminds him acutely of SPRING BREAAAAAK and awakens his “Bacchanlian” nature that revels in “glorious abundance.” Malcolm, his face probably crawling with zillions of invisible lice, tells the camera he’s concerned about being targeted after the merge because his muscles aren’t as cloaked in disguises as Sheppard’s. He and Reynold get together in the water and decide to create a band of brothers with Erik and Eddie, trusting each other and buying each other’s Teen Beat issues until they become old, gray, fat, and obsolete. Reynold, high on caffeine, confesses to Malcolm that he has the hidden immunity idol in order to gain his trust. Malcolm doesn’t reciprocate, though he has an idol, too, which is how pros play this game.

For immunity, three members of each tribe have to paddle into the ocean and dive down to retrieve a statue. Then they lug it back to shore in a boat and place it at the base of a tower while three more tribe members use grappling hooks to grab five keys, unlocking the tower and pulling the statue to the top. Sherri sits out for Gota, who place Brenda, Erik, and Eddie in the first heat against Bikal’s Dawn, Corinne, and Michael. After nearly capsizing, Bikal catches up with and then overtakes Gota, but Erik gets the statue quickly and regains their lead. By the time Bikal is back at shore, Gota is already grapplin’ with hooks. Reynold is a master grappler, and though Sheppard puts forth a good effort, Gota wins again. Sheppard takes the loss hard and sulks around camp for a while before telling Cochran that he threw the challenge to ditch one of the fans from their tribe (using a lion cub analogy, naturally). I rewound and watched the whole thing again to try to give Sheppard the benefit of the doubt, but the man was casting hooks like he was trying to catch a white whale. There is no way he lost on purpose, but Cochran plays along though he tells the camera that Sheppard’s excuse is obviously “complete crap” — this is all just “a little of the razzle-dazzle,” because it’s common knowledge that a grappling hook is “the spy’s basic tool.” Cochran is so en fuego this episode. I hope this air time doesn’t mean everyone is about to turn on him. At least he has made it to the jury, because we know the merge is imminent. The Bikal alliance decides to split the votes between Michael and Julia to safeguard against hidden idols, but Corinne is hesitant to give up her fancy accessory, Michael. When Corinne leaves, Sheppard tells the rest of the alliance that he won’t be bullied, and once again brings his BFF Boston Rob into the conversation. The ghost of Boston Rob hangs over this man like a specter. Corinne meanders back over and when Sheppard tries to dismiss her, she accuses him of being “so mean.” She privately says that if this game were real life, she’d kick Sheppard’s ass, but decides to bide her time. Cochran observes that things are going to get ugly between Corinne and Sheppard, and because he’s this season’s Feste, he’s likely right.

At tribal, Probst asks the team about the tensions that have arisen between the fans and the favorites, so Sheppard chimes in that he and Corinne have different “processes” that can lead to clashes along the winding path of social strategy. Probst also calls Phillip out on wearing the leader’s cap in both challenges, musing that “the guy who says give me the ball is the guy who says ‘count on me.'” Phillip blows some smoke about his physical acuity and the mentality of winners, so Probst floats off to another flower and focuses on Corinne’s obsession with Michael. She contends this fixation is exaggerated, but she “think[s] it’s neat that he’s gay, though.” This woman! I’m sure she’s going to replay the sound bite of Michael admitting to feeling like “a cat hanging onto tree for four or five days” a million times in her mind, building little gay cat sandcastles in his honor all over the beach before boiling a bunny for his dinner. The vote is split between Michael and Forgotten Julia, but after a revote Forgotten Julia gets snuffed and ceases to pretend to exist. In her exit interview, she is played by a cloud of no-see-ums getting blasted by a bug light. Next time! The merge is here, and so is the challenge during which everyone has to eat as many slugs and sloth brains as they can without throwing up. Save your adventurous ramen bowls for after your mind, eyes, and stomach have made amends. Bide that chunky milkshake. There will be hurls.