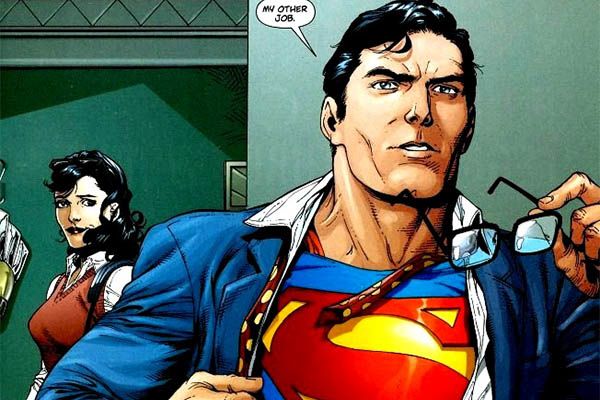 Since the 1940s, Superman’s alter ego, Clark Kent, has held down a day job as a reporter for the Daily Planet, a venerable Metropolis broadsheet whose very existence (as the Onion pointed out in July) may now be the most unbelievable aspect of the Superman mythos. But not anymore: In this week’s issue of Superman, Kent has delivers an impassioned, Sorkinesque newsroom-floor speech about the debasement of modern journalism and then resigns from the paper.

And according to Superman writer Scott Lobdell, quoted in USA Today (also still a newspaper that exists, oddly enough!), we won’t see Clark’s byline pop up in another fictional print media outlet anytime soon. Lobdell says Kent “is more likely to start the next Huffington Post or the next Drudge Report than he is to go find someone else to get assignments or draw a paycheck from.” You know newspapers are in trouble when even Superman‘s given up on them.

Some background: When DC overhauled its entire line last year, Superman was recast as a younger, angrier champion of the downtrodden type whose famous crusade for “truth, justice, and the American way” now involved battling slumlords and unscrupulous corporate malefactors. Clark Kent, accordingly, became a modern-day muckraker whose work frequently brought him into conflict with the unscrupulous corporate malefactors at Galaxy Communications, the Planet‘s new parent company. So something like this was bound to happen.

“I’ve been a journalist for barely five years now,” a stubbly, hoodie-clad Clark says to Planet editor Perry White in the new issue. “Why am I the one sounding like a grizzled ink-stained wretch who believes news should be about — I don’t know, news?”

We could point out any number of things here, like the fact that Clark Kent has quit the Planet before, in the ’70s, for a brief stint as a TV news anchor, and that if Superman’s death can be undone, his decision to leave print media almost certainly will be, too, and that Clark can afford to stand on principle because an invulnerable man from Krypton doesn’t need health insurance. (“This is what happens when a 27-year-old guy is behind a desk and he has to take instruction from a larger conglomerate with concerns that aren’t really his own,” said Lobdell, adorably underestimating the amount of metaphorical fecal matter the average 27-year-old guy is willing to eat to hold onto a steady job in journalism.)

But seriously, Scott Lobdell — a Drudge shout-out in 2012? Did you have to AltaVista that reference, or are you more of an Ask Jeeves guy? Why not invoke Brill’s Content or Space.com while you’re at it? Also, c’mon — he’s Superman. Surely he’ll aim a little higher than “the next Huffington Post,” too. Although we’re not going to lie: It would be weirdly awesome if this became a book about a pantsless Clark Kent putting together celebrity-sideboob slideshows faster than a speeding bullet while endlessly refreshing his Instagram feed to see if Lois Lane has a new boyfriend. Although maybe that’s just us.