Sundance Diary, Part 1: A Humbling in Park City, a Taste of the Festival Life, and Some Mescaline With Michael Cera 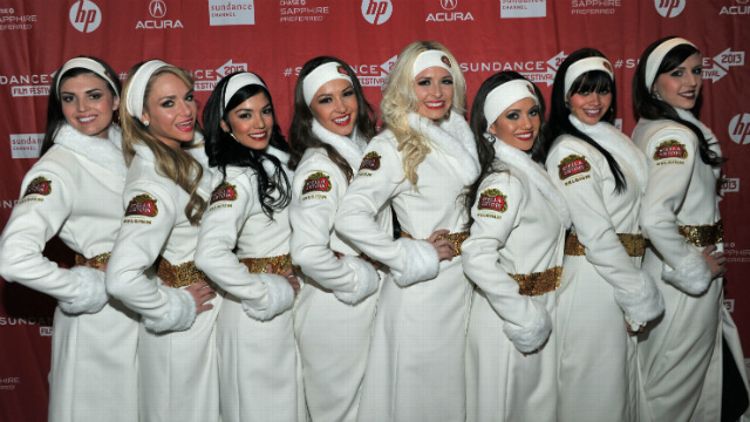 The first humbling is the airport. Salt Lake City International, around 11 a.m. Baggage claim has been repurposed into a holding pen — L.A. blondes in fur-cuffed ski jackets, men wearing big puffy coats with strange, sun-like logos on the sleeves. Cowboy hats, bright pink vests, Burberry bags. All the women’s boots are huge and excessive and trimmed with what seem like entire menageries of tiny, hirsute animals. We’re all going to the 2013 Sundance Film Festival, up in the mountains around Park City, Utah, and none of us looks like we belong here. On Tuesday, the Park City Medical Center announced that in response to a nationwide flu epidemic, it would be handing out more than 5,000 free bottles of hand sanitizer. “PCMC brass say the quaint mountain burg will become a giant Petri dish — with festival-goers shaking hands, riding public transportation and unknowingly spreading germs,” The Hollywood Reporter explained Tuesday. Here at the Salt Lake City International Airport, no one is shaking hands.

To get from here to there, you take a shuttle. You give a man at a desk money, he takes your name, then tells you to get into the holding pen and wait until you hear your name. This is really how it works. You stand there and they yell out names. (What’s up, Gawker film columnist Tim Grierson? We haven’t met, but I know you’re here.) This goes on for an hour: film acquisitions specialists, movie bloggers in branded swag knit caps, innocent bystander skiers alike, all ceremonially named for the entertainment of the waiting mob, then escorted outside onto a waiting flu-van with 11 other strangers. Up the mountain you go. This is the humbling. This is where it begins.

For whom is Sundance fun? My editor, describing the assignment to me over the phone, tried to explain the appeal of the festival to me. “It’s the idea that the average person can come into contact with real Hollywood,” he said. He hastened to add that this was an illusion. Life was no different on the mountain: The talent would be in one place, the rest of us in another. He gave me my directive, to write about Sundance in a “post-Entourage world.” At this moment, it occurred to me that my editor might not, in fact, have my best interests at heart. There was a coughing fit that might have been laughter. Friday morning in Park City and I know now: It was laughter.

I watched the Entourage episode, though. “The Sundance Kids,” Season 2, Episode 7. There’s a Harvey Weinstein character named Harvey Weingarten. At a public screening, Drama asks a two-part question. A pre–Game of Thrones Peter Dinklage cameos, telling Ari Gold: “I tolerate agents. I don’t like them.” Turtle and Drama have a threesome with a Mormon, get awkward about crossing swords, and the episode ends with the gang on top of a mountain, perched on snowboards. James Cameron calls: Vince got the part in Aquaman. As the four men push off and head down the hill, E. and Vince go off a jump together and high-five in midair.

I’m hoping this is what my editor means about Sundance in a post-Entourage world — that if I reenact that high-five, somehow I will have done my job here.

Sundance is where the Best Picture–nominated Beasts of the Southern Wild premiered last year. It’s where Sex, Lies, and Videotape and Reservoir Dogs and Memento and Little Miss Sunshine were first shown. Paul Thomas Anderson got his start here. So did David O. Russell. In the cosmology of the film festival universe, Sundance is the proudly American one, where we celebrate our own independent cinema, all the plucky films being made outside the studio system. It has survived through the acquisition and money-mad late ’90s and the Paris Hilton go-go mid-aughts and any number of creative droughts, one of which might be occurring right now; it’s hard to tell. More experienced hands say cryptic things like “You’ll have better luck with the documentaries.” Like New York’s CMJ Music Marathon or any other festival approaching a fourth decade, Sundance seems to exist primarily by virtue of its own momentum. It’s an excuse for 50,000 people to take paid vacation and come hang out with each other in a lovely ski town. It feels somehow telling that when I land, the first writer friend I run into is wearing ski gear and carrying a giant snowboard.

But I’m here to work, whatever that might mean. I’ve spent the last two weeks e-mailing publicists asking for … well, unclear. I’ve never been to Sundance before. There are mores, customs, rituals I’m unaware of, press and industry screenings, and public premieres, and parties, and private parties, and dinner parties, lists on lists on lists. I have been e-mailing indiscriminately. I have been asking for things I do not want. I have accepted invitations to whiskey tastings and meet-and-greets and luncheons thrown by WWE Studios, which is a thing that exists. I have begged for entry into two screenings happening at the exact same time at opposite ends of town. In my line of work, there are two rules: Do not talk to the publicists, unless you have to. And do not burn the publicists, unless you have to.

I have talked to all of the publicists. One warned me about the high-desert climate of Park City. “Your skin might be in need of lotion,” he advised. He invited me to an after-party, described the venue as “absolutely pimp.” I’ve burned so many people. I haven’t even been here for 24 hours. I dread the ring of my cell phone: some well-intentioned, helpful publicist whom I begged for something, waiting outside a theater when I’m up on the mountain, reenacting that scene from Entourage. It hasn’t happened yet, but it will. I will leave this town in disgrace because I can’t keep a schedule straight.

This is the humbling.

The first film I see is the first of the festival: Who Is Dayani Cristal? It’s a documentary-cum-reenactment about a man, an illegal immigrant, found dead in Arizona’s Sonoran Desert. This is the same desert into which women disappear, never to be found again, in Roberto Bolaño’s 2666: It’s like a black hole for human life. Who Is Dayani Cristal? is directed by Marc Silver but is co-created by and stars Gael García Bernal — more on that “stars” part in a second. The film chronicles the discovery of a body near the border and the subsequent efforts of everyone from the local coroner’s office to the sheriff’s department to the Honduras consulate to identify who this person once was. Silver interviews all of them: immigration reform advocates, sad-eyed medical examiners, the man’s family. It’s a whodunit, sort of — we meet his mother, his father, his brother, his children, and his wife long before we find out who he is. There are striking images of the desert and the route migrants must come up through Mexico, by train — they call it “the Beast” — by coyote, by night march. Silver catalogs what others have left behind: spare sneakers and rings on decomposing hands, filthy jeans, underwear, socks, piles of bones.

Bernal retraces his predecessor’s steps, following the path the dead man followed before him. He slums it in shelters, plays soccer with his fellow migrants, interviews all who come across his path. It’s effective and a little presumptuous: a movie star, setting off with cameras, toward the desert where real people die every day. The movie’s sympathies are obvious. Who Is Dayani Cristal? is an angry film, dense with poignant details, diligent research. But it still feels somehow inert. The story is a compelling one, its telling less so.

Out in the night air after the screening I am invited to a nearby media warren, a ski condo full of prestigious writers. The Sundance nightlife I have heard so much about. When I arrive everyone is gathered around a table, eating spaghetti and grapes. Think pieces are plotted, debated, discarded. I’m asked to remove my shoes at the door. They are all very welcoming. These are kind people. This is civilization in an uncivilized place. A late arrival enters after me, carrying a pizza stone. I put my shoes back on and venture out into the cold.

One last movie to report on before all the other movies start playing. Crystal Fairy. Oh man. This movie. A.k.a. Crystal Fairy & the Magic Cactus and 2012. Starring Michael Cera. The magic cactus in question is the mythic San Pedro cactus, source of mescaline. Cera plays a drug-fiend Ugly American on a narcotics tour of Chile. He’s given to misquoting Aldous Huxley’s The Doors of Perception and passive-aggressively terrorizing his genial Chilean friends, played by director Sebastian Silva’s three brothers, Juan Andres, Jose Miguel, and Agustin. Gaby Hoffmann, of Field of Dreams child stardom fame, plays Cera’s eventual foil: She’s a fellow American, an earth mother, as pushy in her pursuit of nudity and free love as Cera is in his single-minded quest for a hunk of hallucinogenic cactus and the mute obedience of his friends.

It’s hard to overstate how unpleasant Cera is in the film. He talks constantly, solipsistically, a steady stream of muttered insults and outright lies. It’s a remarkable performance: ugly and naturalistic, and Silva frames it as such, with a handheld camera and tight, so that we’re stuck hanging out with the guy too. People were walking out of the theater. Silva apparently shot the film in 12 days, and it shows, but in the right way. It’s mumblecore if mumblecore were possessed by evil hateful demons. It turns Cera’s mumbling affability and charm against itself. The three Silva brothers onscreen are not well differentiated, but they have presence, charm, a kind of ease with the camera on them. Hoffman has a huge bloom of pubic hair that the director returns to more than once; she wanders the hills by the beach where the five of them ultimately end up, high on mescaline and nude but for her sneakers, trying to resurrect the furry body of a dead rabbit. The group falls apart and comes back together at the end, whispering shared traumas by a beach bonfire. It’s a maddening, annoying, viscerally direct film that is probably my favorite thing I’ve seen in 2013 so far, not that I’ve seen much.

Afterward, I wander the grocery aisles of Park City’s 24-hour supermarket. The store is ghostly, mostly empty. But the chip aisle is full. Pods of cheery people load grocery carts high with big cellophane bags of snacks. The nightlife, baby! I walk back to my hotel, slipping on ice, my breath making big white plumes in the air.

Filed Under: Sundance, The Sundance Diary, We Went there