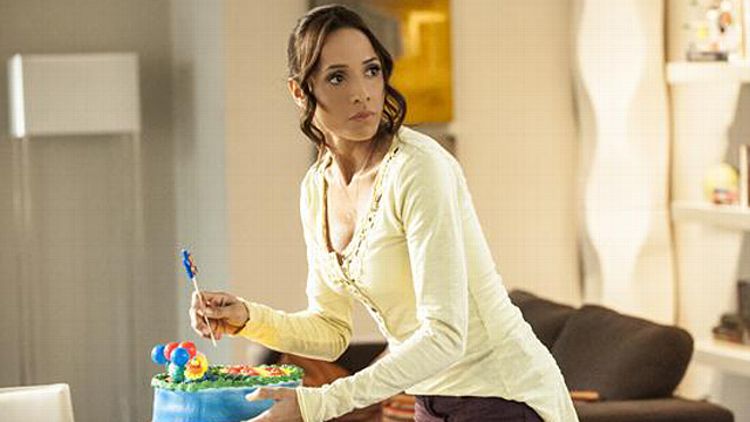 I have been working under the assumption that the first season of Devious Maids was going to be 10 episodes long. It’s not, though. OF COURSE IT’S NOT. It’s going to be 13. THIRTEEN.

At first, I didn’t understand why. Ten seemed like such a good, wholesome, round number. But then I researched. I researched like a mothereffer.* I dug all through the dusty boxes in history’s attic. And it makes SO much sense. Two dates in history directly related to the 13th, which makes them directly related to this inaugural season of Devious Maids: On August 13, 1521, the great Aztec Empire, a profound source of pride for many Latinos today, crumbled, and on July 13, 1821, Nathan Bedford Tennessee, a general in the Confederate Army and Grand Wizard in the Ku Klux Klan, was born.

The universe is tied together with string, and Devious Maids, the fall of an empire, and the birth of a Grand Wizard are all on the same loop. There are no coincidences. There are no mistakes.

Marisol didn’t do much of anything besides tell Rosie what to do, Rosie watched a lot of pornography and had a baby stolen from her, Carmen made friends with the One-Legged Russian House Manager, Zoila V-blocked the Rich White Woman she works for, and Valentina unintentionally earned the admiration of a million-year-old Rich White D.

Marisol: Marisol FINALLY found the Flora Sex DVD she’s been looking for (it was hidden in the safe of the Rich White Guy who runs the prostitution ring), except apparently Flora was not that great at having sex because all it is is her talking to a lawyer about having been raped by one guy and impregnated by another. Oh, also: On the DVD, Flora mentioned a grandmother, so Marisol went to the nursing home to see her.* The grandmother was out of her brain, thought Marisol was Flora, started talking about the pregnancy for a second, and then got lost behind her own eyes. I think the scene was supposed to teeter on being dramatic, but mostly it just made me wish that my eyes were buttholes.

*Egregious. Latinos NEVER put their grandparents in nursing homes. Never. Never ever. The rule is after either the husband or wife pass away, the eldest child of the survivor must let said survivor live somewhere in the house, preferably a back bedroom that is kept either especially hot or especially cold (my grandmother chose cold, God rest her soul).

Rosie: Rosie, having found the Flora Sex DVD for Marisol, stopped working for the Rich White Woman. The Rich White Man that she works for (the one who she assaulted with her V two episodes ago) returned home. He was like, “Let’s have sex.” She was like, “Nah, chill, homie. You almost died the last time I put this V on you.” He’s like, “The doctor says I need exercise.” She’s like, “Then go fix the doorbell.” He’s like, “That’s not the kind of exercise I had in mind.” She’s like, “OK, fine. Let’s do it.” They start making out and then they see the Rich White Woman who stole the baby standing on their porch with a giraffe. Then Rosie’s like, “Ay-yi-yi. I really wish you would’ve fixed the doorbell.” Bam! Give up the Emmy, bitches.

Carmen: Carmen, having abandoned her singing career, stayed true best friends with the One-Legged Russian House Manager. She also threw a bowl of food at a wall. Oh, also, this conversation happened during an afternoon gossip session among the maids after Carmen said that someone she knows has cancer:

Rosie: Who’s got cancer?
Carmen: It’s a secret. I swore on my life I wouldn’t tell.
Rosie: I’ll let you have a churro [basically a crispy doughnut for Latinos].
Carmen: It’s Odessa.

Valentina: Valentina told the billionaire dinosaur that he could have her egg after he told her he’d pay for her to go to design school. Valentina told Zoila, Zoila said no, then Valentina said it’s her body and she can do what she wants with it, including, but not limited to, exchanging eggs for cash like some sort of bizarro DNA Easter bunny. So, just to be clear: Valentina spent the first seven episodes chasing Rich White D like a crack addict, only to see that particular Rich White D shipped off to rehab because he was a cocaine addict, and now that the Rich White D is all the way gone, she’s begun trying to defertilize her uterus. All of the dreams young Latinas aspire to are accessible only through the uterus, duh.

Anyway, this all falls through three minutes later. The Rich White Woman who Valentina and Zoila work for tells the billionaire dinosaur that he can’t have Valentina’s egg, which I guess makes up for the Rich White Woman having ignored her own child for the last 20 years.