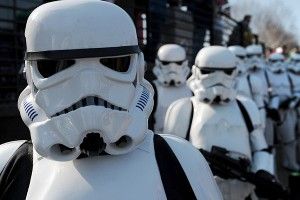 Well, things just continue to get more interesting, don’t they? Days after we hear that Harrison Ford is actually considering coming back as Han Solo for Episode VII (possibly in order to murder him), we get even more real-deal, concrete news. This time, it’s about the status of the next Star Wars screenplay. It turns out, as Vulture reports, that Disney/Lucasfilm had already tapped Michael Arndt — who won an Oscar for his first screenplay, Little Miss Sunshine — to write a 40- to 50-page treatment for the first flick in the new trilogy. Whoa, Michael Arndt. Envy of all of Hollywood right now. Crushing the game, bro.

The crucial details in Vulture’s report:

[T]alent agents were similarly astonished to learn that Arndt had been at work on the treatment long before the deal was announced, catching them flat-footed and cutting off any chance they’d have to proffer their own many eager candidates for the coveted job. Sources also tell Vulture that the studio’s brass want to bring back the three central characters of the original Star Wars: a much older Luke Skywalker, Princess Leia, and Han Solo … We’re told that Arndt’s treatment will soon be crossing the desks of top directors, including Brad Bird, Steven Spielberg (the former producing partner of Lucasfilm co-chair Kathleen Kennedy), and J.J. Abrams.

By the way, one director who won’t be getting Arndt’s treatment? That’d be early-WWII-ender Quentin Tarantino. Despite being batted around (mostly by the Internet) as a favorite to tackle the trilogy, Tarantino told a red-carpet reporter that he “could so care less … especially if Disney’s going to do it. I’m not interested in the Simon West version of Star Wars.” I honestly have no idea what Simon West, who broke in directing Con Air and most recently did The Expendables 2, has to do with this. Seems like sort of an unnecessary jab, QT. But, yes, you made your point. There will not be any anachronistic Bobby Womack jams on the soundtrack to Episode VII.

OK, back to Arndt: Short of breaking into his home office and searching his laptop for Word files titled TOP SECRET FOR CLASSIFIED EYES ONLY, the above is all we know at this time. It’s also not a sure thing that Arndt and his treatment will be used; Vulture only goes as far as to say it’s at least “likely” he’ll be “one of the writers.” But if Arndt does pull through on his front-runner status, can we trust him? After all, it’s a long way from the quirky family indie-drama game to the epic space-warfare game! Well, he also co-wrote Toy Story 3, plus he handled the next Hunger Games and the upcoming Untitled Pixar Movie That Takes You Inside the Mind scripts all by himself. He might be a little green, but it sounds like he’s got a sterling rep inside the industry (plus, you know, that Oscar). So, allow us here at Grantland to be the 1 billionth voice saying this to you, Michael Arndt: Don’t screw this up, man.