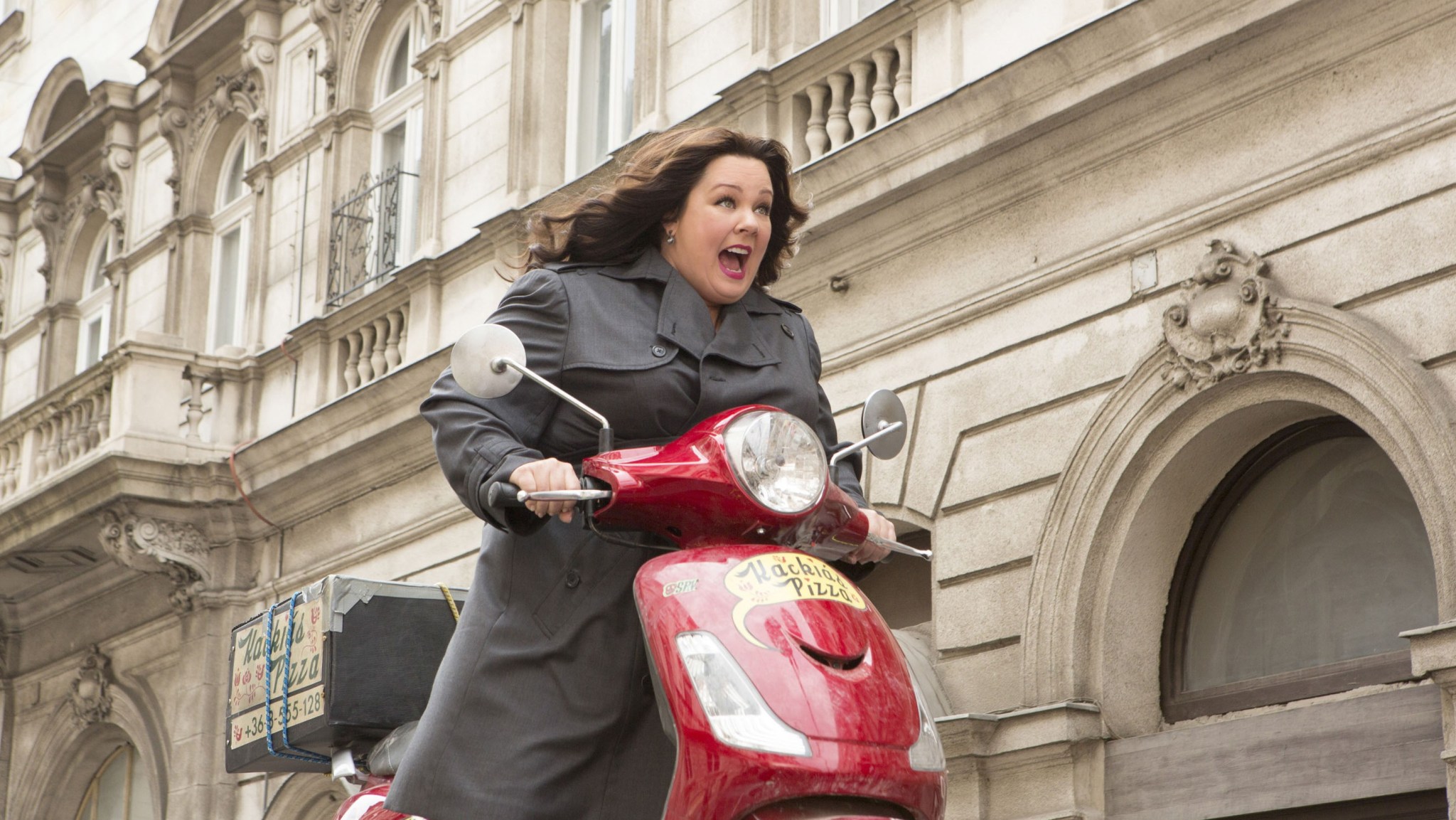 At comedies, I usually keep a tally of the number of times I laugh. I lost track at Paul Feig’s Spy. Laughing at this movie became a form of exercise. You don’t need crunches when you’ve got this. Loosely, it’s an espionage-movie spoof, but the spoof isn’t what makes it special. It’s a pretext to throw a party. Feig might be the most generous director in American comedies. I don’t know whether he thinks we all can be funny, but he seems to believe that everybody in his movies can be. Here, that spirit stretches from the film’s star, Melissa McCarthy, all the way down to the people playing the couple simulating a blow job in a cutaway to a darkened Parisian street.

That kind of comedic egalitarianism hasn’t been too fashionable since Mel Brooks. But if a film has the talent and the writing, it’s a great joke strategy, because an audience won’t know where the next laugh is coming from, just that it can leap out from anywhere. At least twice in Spy, vermin infest the CIA bunker where desk analysts toil, and it’s such a random, stupid thing to do (bats in the hair and rodents on equipment) that it just works. For one thing, each actor has a different reaction, and the reactions crack you up. Amid the chaos, Feig cuts to a pert blonde analyst, played by Jessica Chaffin, who sits in front of her monitor and deadpans, “There’s a mouse on my tit.” It’s shameless, but she’s a hoot.

The setting is a kind of CIA/James Bond–style world in which Jude Law puts on a tuxedo and an American accent and tosses around Bulgarian thugs with the same alacrity that he uses to toss his hair. (His character is a studly dope named Bradley Fine.) All the while, McCarthy’s dowdy, antic analyst, Susan Cooper, speaks into his earpiece; she’s a kind of periscope, thanks to an impossible surveillance system, who can warn him of assassins around every corner. This is all somewhat standard secret-agent-movie stuff. The action has that slowed-down-then-sped-up slingshot quality you get from Hong Kong, Luc Besson, and sports replays. It’s taken seriously enough. But Feig is constantly looking for ways to laugh at other conventions. When Susan tells Bradley someone’s coming, he’s so grateful that he says he could kiss her. She says, “I would accept that with an open mouth.”

Bradley finds his human target, a baddie who knows the whereabouts of a nuclear bomb. As the guy is running his mouth, he’s shot in the head, and there’s a cut to Law, holding what basically is a smoking gun. He tells Susan that he took the shot by accident. You see, his allergies have been terrible this whole trip. The joke between them is that he flirts with her without realizing that she’s in love with him. He treats her like an assistant, and she has to suppress the urge to mount him. At dinner one night, she’s thrilled when he pulls out a jewelry case, only to find out he’s offering her just a pathetic cupcake necklace. (In a change of pace for a Melissa McCarthy movie, she knows it’s pathetic, too.) A few minutes later, Bradley is murdered by a crime heiress (Rose Byrne) who blows the cover of the CIA’s other undercover agents and is trying to sell that nuke to a slutty Italian (Bobby Cannavale). So the agency director (Allison Janney) reluctantly sends a heartbroken and pinkeye-suffering Susan to Europe to do reconnaissance.

Like the bats and rats, the pinkeye is probably unnecessary. But these arbitrary bits are parapets from which the cast can do terrific sniping. Janney has a field day obscenely berating McCarthy, who barely objects to the abuse. Vulgarity proliferates in Bridesmaids and The Heat, the other two films Feig has made with McCarthy. He somehow modulates it enough that it manages to endear itself. Every other word that the cocky agent Rick Ford (Jason Statham) says, in his gnarly English street accent, is obscene. But the character is such a good joke on the macho superagent — and on Statham himself — that you hear his profanity the way you hear “if,” “and,” or “but.” Statham’s recent mock-heel turn has been stiletto-like in its fineness. If he’s going to be a goon, as he also was in Furious 7, best to do it with a smirk.

Statham’s hilarity speaks explicitly to the Feig mission. Another movie would have kept him playing straight to keep McCarthy’s lane clear. But comedically, Feig is working on a boulevard. There’s a lane for everybody, but he also thinks it’s funny to have different personalities crash into each other. So when McCarthy and Statham argue, they do so with gags and put-downs. The same goes for McCarthy and Byrne, whose character, Rayna, warily befriends Susan. Rayna is a London-educated Bulgarian with piles of money and hair and lots of chintzy, skintight couture. She looks like a supermodel in a Borat-style parody of fashion: a complete conflation of Bond villain and Bond girl. It’s the best, funniest thing Byrne’s been allowed to do at the movies. She has a similarly snooty role in Bridesmaids, but there the joke was on the character. Here the character is the joke, and Byrne’s calibration of bad snobbery is perfectly arid. The fun of the movie is all the parrying being done among the characters. Rayna mocks Susan’s evening gown. When Rayna is pushed to the ground, Susan quips, in McCarthy’s mock-polite Illinois accent, “Thank god your hair broke your fall.”

The movie isn’t rigged for McCarthy to win every bout. Most of the time she risks being upstaged by Miranda Hart and Peter Serafinowicz, two British comedians. Hart plays Susan’s best chum, Nancy, a fellow analyst who’s lanky, plain, and bluntly honest. In Europe, she becomes Susan’s sidekick and gets tangled up in a side plot with 50 Cent. I’ve never seen Hart’s BBC show, Miranda, but it seems like the source of her power as a funny person is her elevated self-regard. She, at least, is impressed with herself. Serafinowicz is a ham. He plays Aldo, Susan’s greasy driver in Rome, and his comedic objective is to drive her crazy with sexual harassment. Both he and Hart are happy revelations to me, though I imagine that this movie’s British audience will know what they’re in for.

Feig might be the first director who is getting away with the Muppets’ idea of comedy in a non-Muppets movie. Normally, I’d tire of all the laughing, and there was a moment during the second half when I had to stop for my health. I took the break to reappreciate McCarthy. As female comedy stars go, she is unusual; only Bette Midler and Whoopi Goldberg have as many pitches of profanity as McCarthy does. But she also has that quality that a lot of star comedians have, in which audiences laugh before she’s even done anything. Watching her in something like Identity Thief was painful, because there was no one to tell her that her coarseness and vulgarity were obnoxious. The movie was laughing at her, and the audience obliged. But there, and in last summer’s Tammy, which she cowrote and her husband, Ben Falcone, directed, McCarthy played a sad, mocking part that dumped gags all over her. Feig appears to adore McCarthy. He doesn’t treat her like a clown. When she works with him, she can risk being obnoxious because he comes up with sensible environments for her excesses or, in an uptight Sandra Bullock, the ideal foil.

In Spy, she’s playing a caricature that is almost a complete character. The movie isn’t out to humiliate her. It wants to prop up a version of heroism that makes sense for McCarthy: rude, exasperated, unstable. The CIA keeps giving Susan anti-glamorous disguises (“I look like somebody’s homophobic aunt,” she says of one) and such insulting toys as a Beaches watch and stool softener. But there’s a rewarding logic to them. And in Rome, McCarthy arrives at a ball in a beautiful contessa disguise looking very much like McCarthy herself. She’s a new woman, both the character and, especially, the comedian. You feel the power of her insults and come-ons as she moves around this glamorous, Bond-parody interlude, and you sense another, proven direction for her persona to go: West. Mae West. 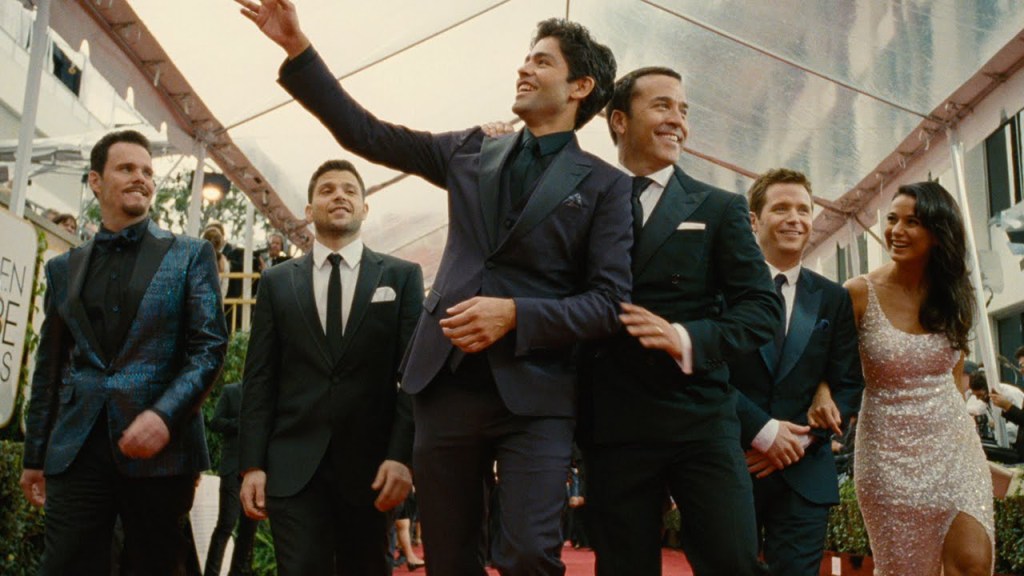 A gay wedding is cooked up so Ari’s former assistant, Lloyd, can resume his appeals to his ex-boss’s bigotry. Ari’s current assistant is never right and always cringing, which, if I were Kid Cudi, who plays the assistant, is probably what I’d do, too. And celebrities pop up like the plastic rodents in a Whack-a-Mole console. T.I., Jessica Alba, Warren Buffett, Liam Neeson, Kelsey Grammer: To a person, they’re in a foul mood. Mark Wahlberg created the show. He strolls into and out of one scene, leaving a cloud of smoke that more or less reads, “Go see Ted 2.”

The cameos are what appear to be making people say wow, as my seatmate, a stranger, did at a screening the other day. In that sense, the film is like a tabloid that turns its own pages. The cynicism here accounts for the appalling low of this movie. It lacks the will, mandate, and talent even to attempt filmed entertainment. It just keeps shitting stars. There’s neither a satire of Hollywood delusion to speak of nor a farce of entertainment excess — despite the holy presentation of the model and actress Emily Ratajkowski as a combination of Angelina Jolie, Julia Roberts, and a walking Viagra dispenser. Entourage is the deluded bloat itself.

Vince’s project is something called Hyde, and it’s as desperately anticipated as even the crumbs are for a new Star Wars movie. You don’t know why it’s worth the bother. The Texan (Billy Bob Thornton) has dispatched his grubby hick son (Haley Joel Osment) to look at the film, of which we see only a single sequence. It looks as if he turned the recent Ferguson protests into a Sprite commercial. The son has some concerns, but what does he know? He’s a grubby hick. These guys are going to … the Golden Globes!

Right now San Andreas is also reducing Los Angeles to a hideous essence. The title character opens its maw and indiscriminately sucks down whatever crap is in its vicinity. But given that Entourage exists, I’d say it missed some.

Songs of the Week: The Howls of Mark Kozelek and Other Angry Men