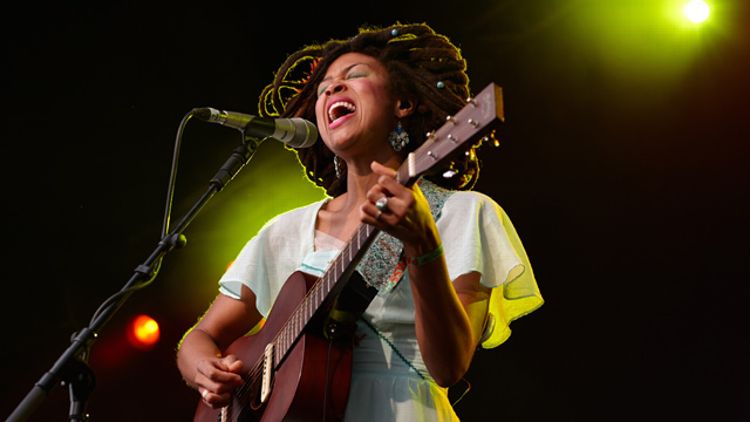 Perhaps the best thing you could say about roots-music polymath Valerie June and her new record, Pushin’ Against a Stone, is that her music transcends toxic descriptors like “Williamsburg-Appalachia-country-blues-pop.” That’s how June was classified recently by The New York Times Magazine, which is among the media outlets that have rushed to anoint the 31-year-old Tennessee native as a bright young talent and budding star. Considering that the banjo is now as ubiquitous as Auto-Tune on hit records, those pronouncements may indeed prove correct: Pushin’ Against a Stone is an ambitious and yet easily digestible compendium of blues, soul, folk, and gospel styles working in harmony in the service of easygoing pop tunes. “Quirky” with heavy quotation marks, Stone is an inherently classicist record and therefore — in the age of Adele and Mumford & Sons — highly commercial.

But June is hardly a “new” discovery, and Stone (in spite of how it has been presented in the Times and elsewhere) is far from being a debut record. Before relocating to Brooklyn three years ago, June toiled for more than a decade in Memphis’s storied music scene, making a record with her former husband in the group Bella Sun as well as a series of solo releases. In 2009, she caught a break of sorts when she was featured in an MTV documentary helmed by Memphis filmmaker Craig Brewer about local musicians trying to make it. But June’s ascendance was really due to a confluence of new and old media creating a perfect storm of publicity. In 2010, June took to Kickstarter in order to launch a new album with a video that packaged her as an Earth mother with a “little ole sound.” The campaign caught the attention of producer Kevin Augunas, whose credits include the Lumineers, Edward Sharpe & the Magnetic Zeros, and later Dan Auerbach of the Black Keys; both men ended up helping June shepherd Stone to completion. By then, June had left Memphis for New York, which is when she started getting her due from the Times and NPR. Even in a decentralized media culture, living in the vicinity of old media institutions continues to be a benefit for musicians, it seems.

At times, the hot, discomforting glare of this new spotlight wears on Stone, which takes a few songs to loosen up before finishing up strong in the back half. As is the case with a lot of Americana records whose primary selling point is down-home folksiness, there’s an occasional “eat your vegetables” prissiness to June’s music, particularly on the banjo-plunking lament “Somebody to Love,” where June’s distinctive twang verges on affected whininess. After so many years spent in obscurity, June is guilty of trying a little too hard to be “real” for an authenticity-hungry constituency. But once June settles in — when Stone sounds less like Williamsburg and more like Appalachia — her casual conversance with music associated with her home state shines through.

Stone might not be a true debut, but it has a debut’s sensibility — it’s not so much a coherent statement as a grab bag of June’s various interests and proclivities. She runs through swampy R&B (“The Hour”), ’60s girl group balladry (the terrific “Wanna Be on Your Mind”), mountain music (“Tennessee Time”), a ghostly murder ballad (“Shotgun”), and hard-scrabble country soul (“Workin’ Woman Blues”). Perhaps it shouldn’t be a surprise that the best song is Estil C. Ball’s gospel standard “Trials, Troubles, Tribulations” — June treats the rituals of music history with religious reverence. You can hear that history in June’s arresting (and potentially polarizing) voice. It’s been likened to Dolly Parton and Erykah Badu, which gives you an idea of June’s vocal elasticity and warmth. But it truly is an instrument unique to June, with squeaks and crackles as idiosyncratic as a dusty 78. Ultimately, June can play so many different styles because she can sing so many different styles.

Pushin’ Against a Stone reminds me of Blak and Blu, last year’s very good major label debut by Texas blues guitarist Gary Clark Jr., who likes to mix Hendrix riffs with Roots-style hip-hop and the poppy garage-rock of the Black Keys. (Auerbach’s signature growling guitars are also a significant presence on Stone.) Like Clark, June is a synthesist of tradition and trends. Her gift is making the old sound new again, though Stone is sure never to sound too new.

While Pushin’ Against a Stone propagates a version of Southern music as it exists in the fantasies of outsiders — where regular folks bash out old-timey dirges on front porches while donning Depression-era garb — proudly juvenile Nashville power-poppers Diarrhea Planet’s just-released second record, I’m Rich Beyond Your Wildest Dreams, is the scuzzier, mulleted alternative. It is Southern music as it exists, not inside the walls of a church or music museum, but by the smoking doors of the neighborhood high school. Dreams is as uncouth and ill-behaved as Stone is tasteful and proper.

A six-piece with four (!) guitarists, Diarrhea Planet (I never tire of typing those words) is Lynyrd Skynyrd for a generation weaned on Blink-182. (Or like the Hold Steady if the band members were replaced by the characters Craig Finn sings about.) “Heavy metal rotting out my brain!” frontman Hodan Dickie yelps at the start of “Lite Dream,” sounding like Rivers Cuomo doing a halfway-decent Gene Simmons impersonation. It’s the perfect tone-setter for this gleefully dumb record, which successfully bottles the maniacal energy of Diarrhea Planet’s live show into dunderheaded heat-seeking missiles like “Separations” and the self-explanatory “White Girls (Student of the Blues, Pt. 1)” that explode upon impacting the nearest case of Natty Ice.

Diarrhea Planet is just as committed to roots music as Valerie June, though its version of roots — mainly hair bands and Warped Tour–era punk and emo groups, along with more reputable dashes of Sonic Youth and the first two Weezer albums — won’t win them any recommendations on public radio. Neither will that name, which might be the most egregious act of moniker-related self-sabotage since AIDS Wolf. But as a rock record with a sense of humor and some killer Van Halen–aping guitar shredding, I’m Rich Beyond Your Wildest Dreams is a tremendously enjoyable party, the raucous Saturday night counterpart to Valerie June’s Sunday morning music.