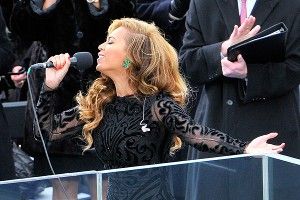 Throughout these past few bitterly cold, pitch-black nights, as allegations that Beyoncé lip-synched the national anthem swirled, the only thing keeping up the spirits of all those true Beylievers in the Beyhive was this: Yes, there was some serious intel backing up the charge — most notably, comments from a spokesperson for the Marine Corps Band — but no one officially said she wasn’t really singing at the inauguration. Well, until now. On Wednesday, CNN got an inauguration official to weigh in, and the word is — “She did not sing live.” Ah, goddamnit.

According to The New York Times, “the Marine Band that accompanied Beyoncé was told at the last minute that she would use a recorded version of their parts. That decision was made, a spokesman for the corps said, because the singer had had no time to rehearse with the band. So the Marines, who had performed for two hours without trouble, mimed playing their instruments during the song.”

Which means it was at least possible that Bey was singing along to herself and a canned Marine Corp band. The Marine Corp band spokesperson was, at least, keeping that door open: “There was no opportunity for Ms. Knowles-Carter to rehearse with the Marine Band before the Inauguration so it was determined that a live performance by the band was ill-advised for such a high-profile event. Each piece of music scheduled for performance in the Inauguration is pre-recorded for use in case of freezing temperatures, equipment failure, or extenuating circumstances. Regarding Ms. Knowles-Carter’s vocal performance, no one in the Marine Band is in a position to assess whether it was live or pre-recorded.”

And in the meantime, all manner of peers and colleagues (and Michelle Williams) weighed in, asking, if she did lip-synch, what’s the big deal? Aretha: “The weather down there was about 46 or 44 degrees and for most singers, that is just not good singing weather.” Alicia: “The one thing that you cannot doubt is that she can sing. She absolutely can sing.” Michelle: “I will say this, it’s not the first or the last time that someone has had to lip-sync. My greatest singer of all time, Whitney Houston, it came to light that her anthem [for the 1991 Super Bowl] was in fact lip-synced.”

As for any actual official confirmation, the Times said that “a publicist for Beyoncé … did not return several telephone calls and e-mail messages on Wednesday from a reporter requesting information. Matt House, a spokesman for the Joint Congressional Committee on Inaugural Ceremonies, which staged the swearing-in and Beyoncé’s performance, also declined to comment.”

And so while the world leaned lip-synch but hoped otherwise, some defenders sprung up. Most notably was Mike Doughty, formerly of Soul Coughing, writing for Slate, drawing a line in the sand: Beyoncé did not lip-synch. He has all kinds of technical know-how to back it up: “Sometimes, when I do a big outdoor festival, I sound-check in calm weather, but the wind picks up when the actual show begins, taking my voice and throwing it someplace other than where I’m expecting it. It’s easy to get confused … Beyoncé, being a samurai, clearly came expecting that possibility. So she compensates: She sings the word ‘bursting’ a little too close to the mic, causing a little bit of discernible distortion—it’s like a subtler version of when you’re talking into the mic on your phone, and you suddenly get loud.” More importantly: “the most compelling evidence that Beyoncé was doing it for real is the HELL YES smile on Joe Biden’s face. Now, that is, clearly, a dude standing two feet from an electrifying lady singing like a motherfucker.” And most importantly: “If she was indeed lip-syncing at the inauguration, give her the Nobel Prize in mime.”

A British audio engineer named Ian Shepherd weighed in, too, and he also thought Beyoncé was singing live. “None of [the] clues are conclusive,” he says, “but to fake all of them, plus the details of the performance itself, would make Beyoncé the best lip-synch artist in the world!”

Well, then, there you have it, Beyhaters and anonymous inauguration official (anonymous, huh? Yeah, better stay that way, my dude): Beyoncé may have been lip-synching, but at least she’s incredible at that, too.

Sex, Drugs, and Bieber?!? ... and Other Horror Stories From This Week's Tabloids