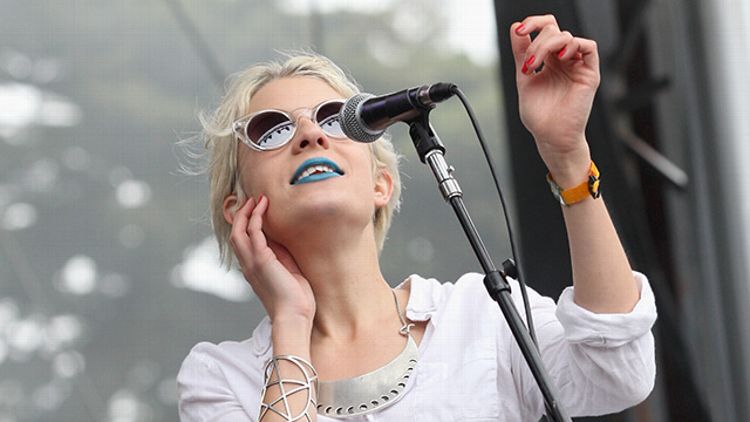 This week we’re handing the Songs of the Week mic over to Claire L. Evans, sci-fi sage, sometime model, and one half of the conceptual pop group YACHT. Those of you in the Los Angeles area can catch them this weekend headlining at the Santa Monica Pier for 98.7’s All Bands on Deck! show, and everybody else with a working Internet connection can download their impossible-not-to-dance-to single “Second Summer” on iTunes. Take it away, Claire!

If Reincarnated — the genuinely moving new documentary about Snoop Lion (née Dogg) going to Jamaica to express his longstanding belief in peace, love, and smoking weed out of hollowed-out carrots, in the style of Bunny Wailer — is to be believed, there’s a song on his upcoming record about eating a grapefruit for the first time. The best mise-en-scène in the movie is Snoop leaping ineffectually at low-hanging fruit in a tropical citrus grove, backdropped by a literal mountainside of wild-growing marijuana, real Jamaican chalice-herb. I wish I could quantum leap to this summer, because I already know this record is going to be the soundtrack.

We played with Gramme five or six years ago in London. At the time, they’d released only one EP, Pre Release, in 1999, but the songs had wormed themselves into a handful of particular, significant consciousnesses — i.e., the whole Hot Chip gang has advocated for them — and they bore a gold-standard cult mystique. They knocked us out; they were heavy. After more than 10 years of radio silence, they finally just released their first-ever full-length record, Fascination, and it’s wall-to-wall gems. The lyrics to this song are so ploddingly perfect for a club anthem, articulating the prison of a soured buzz: “Too high to dance / Feet wanting more / Stick to the floor.” We’re working on a remix for their different, but equally great, track “Rough News” right now.

The first time I really noticed the quantifiably sorry state of the modern word was when we dashed into a Barnes & Noble outside of Seattle while on tour to use the bathroom (related: I can give you a detailed index of the most reliable single-occupancy toilets up and down the Western Seaboard). On my way out, looking for science fiction, obvs, I — slowly, with horror — realized the only categories for literature on the entire first floor were variations on “Paranormal Romance,” “Teen Paranormal Romance,” and “Contemporary Teen Paranormal Romance.” At least now I can pretend they were all presciently repping this great new Matmos song, which, if you accept their conceptual lore, was at least partially authored collaboratively by psychics.

The Juan Maclean, “You Are My Destiny”

People always think that because we’re on DFA, we spend our lives eating petits fours with James Murphy in the studio. Really, though, it’s a disparate family; we’ve never even been inside the DFA studio, and the tracks our label mates produce make us so anxious about being up to par that we tailspin into weeks of near-psychedelic stress dreams with every release. Needless to say, this new Juan Maclean jam is already inching toward canonical, and we haven’t been sleeping well.

The first time I saw Transformers: Revenge of the Fallen, I couldn’t believe the visual complexity of its effects landscape. The sheer scope was inconceivable: billions of metal shards, each individually rendered in glistening chrome, self-assembling at impossible speeds. I wondered, if I was having trouble differentiating what was happening in front of me, what if some person from the 1800s were teleported into this movie theater? Would they even be able to see anything, or would the stimulus just render them catatonic?

What I’m trying to say is, some art requires a contemporary audience, and some artists traffic, by necessity or desire, purely with the symbols of their specific time. Transformers (I gave up on the franchise afterward) wasn’t built to be timeless — only timely. This tends to be the stance of much contemporary Internet-inclined art, too, but occasionally someone manages to create a visual language from found footage and pilfered images that transcends both the medium and the moment. Jib Kidder is such a person. Plus, obviously, the songs are great; he’s been slowly metamorphosing from a pure collage artist into the damaged Neil Young of the future.

I guess the thing about being pathologically prolific your entire life is that even after you die, your fans keep having new opportunities to fall in love with you. This is one of a handful of Arthur Russell productions from 1985 that are being re-released soon under the name Nirosta Steel. I’ll spare you the unearthing-mythos, but this is a dusty nugget rich with the numinous presence of vintage Russell.

There’s probably something to hate about this plinky reggae self-help song, but Yoko Ono’s ’80s output always makes me feel like I’m tweaking on Capri Suns, sitting cross-legged on one of those little-kid rugs covered in wiggling roads, half-listening to a first-grade teacher who’s weird in a way that will only fully unfold for me later in life to explain how bullying hurts everyone. This is by no means a new song, but odds are it’s a deep-enough cut that it might be new to you; if not, do yourself a favor and revisit her 1985 record, Starpeace, because it will at least make you feel brand-new yourself.

Our buddies Juiceboxxx and Adam Forkner (otherwise known as White Rainbow) have been hanging out a lot in L.A. recently. I’m not sure what they do, really, other than play ratty basketball and cruise around the city with their windows down eating fast food, going hard in the paint at downtrodden karaoke joints, and generally being down for whatever. Every once in a while Adam’ll play us some weird track they’ve whipped up together just for fun — like this song, for example — and it always offers us a glimpse into an insane, jacked-up SoCal existentialism that can only be found on late-night runs to Yum Yum Donuts. It’s truly beautiful in its own way.

Filed Under: Snoop Dogg, Snoop Lion, Songs of the Week