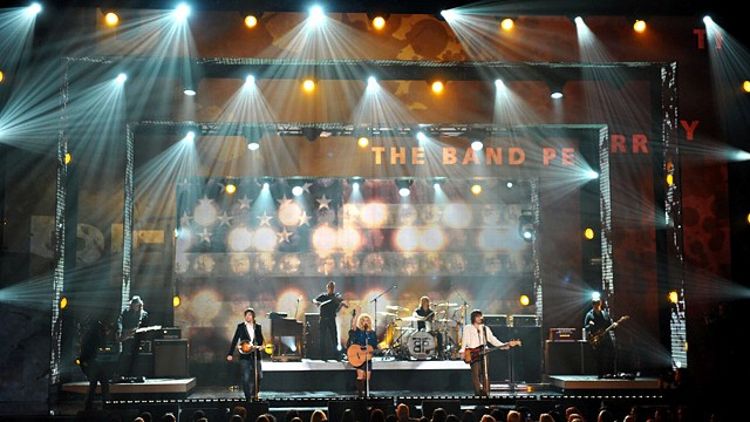 Even before Kanye West’s My Beautiful Dark Twisted Fantasy got wrongly (wrongly!) shut out of the Album of the Year running at this year’s Grammy Awards (going down on Sunday night), it was tough to get particularly psyched up for the event. That’s because — well, that’s because it’s the Grammys. Some things they get totally right; a lot of things they get laughably wrong; odd, intermittently entertaining performances go down; Neil Portnow takes a few minutes to get all ornery about downloading; and then we’re out. That’s not to say you shouldn’t watch, of course: Sitting through the entire Grammys telecast while complaining about every single thing that happens is a time-honored snob tradition. To that end, herewith: Grantland’s 2012 Grammy Awards Preview. Let’s get into it.

See that big list of random musicians up there? Those people are going to be doing a “special performance highlighting dance/electronica music“! OK, this might really be an all-time Grammys classic. Will there be glow sticks? Will there be choreography? Who invited Dave Grohl? Like, I have no idea what’s going to happen, but I have a strangely strong feeling it will involve trampolines.

Speaking of Breezy — it’s a few days before he makes his return to the Grammys for the first time in three years, and a judge has just upheld his supervised probation. Will it be strange then if, as seems highly possible, his album F.A.M.E. takes the Best R&B title while Rihanna sits just a few feet away? It’s one thing for Chris to be up on stage performing and distracting everyone with sick backflips and stuff, but all alone in front of a podium collecting an award? Just to be safe, if he does win, he should probably do a sick backflip.

This isn’t a particularly random pairing: Rihanna guests on the latest Coldplay album Mylo Xyloto, on the track “Princess in China.” But it’s one thing to use studio magic to tamp down Chris Martin’s awkwardness in the presence of people who know how to dance, and it’s another to do so in person, and live. Chris is generally good to go as long as he sticks to the piano, but when he gets up and roams around with a cordless mic — oh boy, all bets are off. If Chris and RiRi at no point stand back-to-back, intensely smiling at each other over their respective shoulders, well, I’ll be disappointed.

Adele Winning Record of the Year

Is anything beating out the monster that is “Rolling in the Deep”? Let’s hope not because, if Adele wins, that’s one more opportunity for her to hate on Karl Lagerfeld in public. Let’s back up. Earlier this week, Lagerfeld called Adele “a little too fat, but has a beautiful face and a divine voice”; Adele responded in a statement to People: “I’ve never wanted to look like models on the cover of magazines. I represent the majority of women and I’m very proud of that.” Lagerfeld then tried to backtrack on his comments, saying Adele was “my favorite singer and I am a great admirer of her.” A humble suggestion: Adele wins, thanks all the people she has to thank, and then immediately bans Karl Lagerfeld from ever again listening to her jams.

The Beach Boys, Foster the People, and Maroon 5 Performance

The Beach Boys are launching their big 50th-anniversary reunion — which includes a studio album, catalog re-releases, and a tour — with this Grammys appearance. I know it’s been a while — but check ‘em out up top just shredding on “I Get Around”! Does Adam Levine really need to be present for this?

If I were to bet, I’d say country sibling act The Band Perry would take this, or maybe even Nicki Minaj. But if Skrillex does nab the title, thereby effectively dropping the bass on the entire country all at once, it’ll make great fodder for your Grammy viewing party. Skrillex has consciously cultivated an odd image; it’s part of the whole package. So, as he trots up to collect his statuette, try amusing your fellow party attendees with some humorous commentary: “Wait, why is Rivers Cuomo’s Albanian little sister getting up on the stage?,” etc.

The Bruce Springsteen and The E Street Band Performance

Some rare real talk here. Clarence Clemons, the E Street Band’s longtime saxophonist, died this summer at the age of 69. In his eulogy, Bruce admirably pulled no punches, paying praise to Clemons’ many talents and larger-than-life persona, but also saying that “’C’ lived a life where he did what he wanted to do and he let the chips, human and otherwise, fall where they may. Like a lot of us [he] was capable of great magic and also of making quite an amazing mess.” Whatever the actual E Street Band performance might entail, it’s not to be missed just for the possibility of another earnest, heartfelt tribute to Clemons.

Watch the Throne seems like a shoo-in here, which is good news because that means … photos of a recently post-pregnancy Beyonce sitting in the auditorium! The second best thing to actual photos of Blue Ivy.

No particular reason. I just happen to ride for Taylor Swift.

Bon Iver’s Justin Vernon just cannot stop shit-talking the Grammys! It started before he was nominated, when the New York Times Magazine asked him what he would do if he were so honored: “I would get up there and be like, ‘This is for my parents, because they supported me,’ because I know they would think it would be stupid of me not to go up there. But I kinda felt like going up there and being like: ‘Everyone should go home, this is ridiculous. You should not be doing this. We should not be gathering in a big room and looking at each other and pretending that this is important.’ That’s what I would say.” Also: “Do you play high school basketball to get laid or for the glory? And I guess I’m a glory guy.”

More recently, Vernon explained that the Grammys had asked Bon Iver to perform at the ceremony, but “We had to do a collaboration with someone else. And we just felt like it was such a large stage — we’re getting nominated for this record that we made. Me and Brian [Joseph] and a bunch of our fucking friends and we were given accolades for it, and all of a sudden we were being asked to play music that had nothing to do with that. We kind of said ‘fuck you’ a little bit, and they sort of acted like they wanted us to play, but I don’t think they wanted us to play.”

So: Please win, Justin. And please don’t stop being you.

Filed Under: Music, Songs of the Week, The Grammys