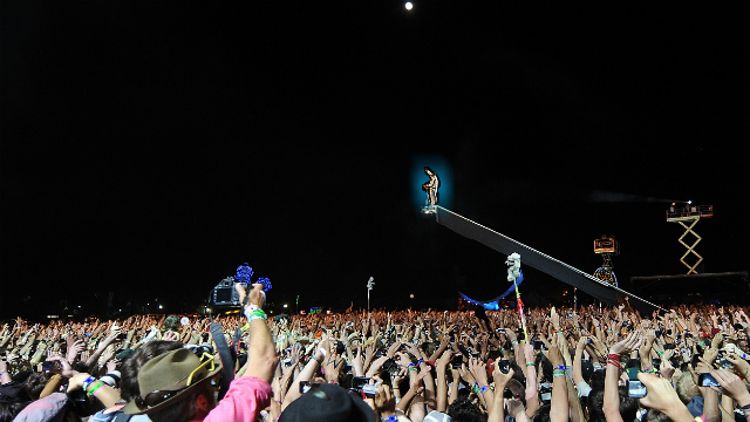 Are you ready for the future?! And by the future, obviously I mean, are you ready for a Nate Dogg hologram?!! Nate, who passed away just over a year ago, is joining Dr. Dre and Snoop Dogg’s Coachella-closing set this Sunday night via Princess Leia. This. Is. Not. A. Joke. According to TMZ, “Dr. Dre didn’t want to leave Nate out of his Sunday performance — so he’s incorporating his old friend using hologram technology … the same technology that broadcast Mariah Carey’s image across Europe last year … at 5 simultaneous concerts. We’re told an image of Nate will be projected onto the Coachella stage — alongside Dre, Snoop Dogg, Kurupt, Warren G, and Daz Dillinger — to make it appear as though he’s actually performing on stage.” SPIN points out that Eminem, Kendrick Lamar, and Wiz Khalifa are rumored to be on stage as well, but who in the hell is going to be looking at anything but the Nate Dogg hologram. Only one question: Is a “Help me, Obi-Wan Kenobi, you’re my only hope” reference too obvious to be made from the stage, or is it so obvious it must be made from the stage?

At the Drive-In, “Quarantined”

ATDI, one of the three major acts reuniting at Coachella this year, ran through a few tiny warmup shows in their home state of Texas. For a band possibly going through some awkward hey-how-you-been situations right now — guitarist Omar Rodriguez-Lopez has joked, “It’s like getting back with your ex-wife, only in this case there are four ex-wives!” — they sure look on point.

And here’s Pulp, another of this year’s big reunions, rocking Radio City Music Hall this week. The video is a bit shaky, but don’t they sound great? Man, cashing those huge Coachella checks sure does wonders for a person.

And, finally, we have Refused, the third leg in the Coachella reunion tripod. It sure is nice to see everyone so spry and healthy all these years past their original expiration date. But the real heroes here? The guys and girls bringing their fancy expensive HD cameras to shows where they may very well get kicked in the face. YouTube nation thanks you, anonymous rogue videographers.

Radiohead will be the last act on the big stage Saturday night, but A$AP Rocky and friends will be on the smaller Gobi stage when the brainy Brits get off. For all A$AP first-timers interested in hovering over to Rocky after Thom Yorke is done maniacally and beautifully dancing, now’s a good time to remember the Mob’s last appearance at a music festival, at this year’s SXSW, where some unruly fans spurred the crew into an epic floor-clearing brawl. Reminder: Don’t throw any beers onstage. No one knock over Rocky’s green rag.

Meet Madeon, a floppy-haired French 17-year-old electronic music wunderkind taking the Coachella stage tomorrow night. Look, it’s one thing he’s already achieved a level of worldiness and success I’ll be hard-pressed to ever reach. But does he have to dress better than me, too?

The Weeknd, “High for This”

Making his U.S. live debut at Coachella will be the reclusive sex-drugs-and-more-drugs R&B act The Weeknd, a.k.a. Abel Tesfaye, and this appearance will then be followed by a full, proper U.S. tour. Some fans may worry the live dates and the exposure that will come with them might take away from all that secretive mystique Tesfaye has worked so hard to engineer. But I say whatever he loses in aura and inscrutability, he’ll more than gain in knowledge of interstate Wendy’s dollar menus.

Shout-out to L.A.’s Abe Vigoda, one of the first bands playing this year’s Coachella. The vast majority of attendees may well be sleeping, eating, drinking, or attempting to purchase MDMA when the band plays their noon set this afternoon. And, as this perfectly messy, perfectly exuberant noise-pop jam attests, they will be missing out.

Speaking of bands that may be overshadowed by other, bigger bands at Coachella: Here’s Brooklyn–via–New Jersey’s Real Estate, dropping a representatively pleasant, washed-out jam alongside a violent kidnap-plot music video. If you just happen to lose your friends and your money and your cell phone and your dignity this weekend, Real Estate’s Sunday afternoon set should be a pretty good place to cry.

Plus there’ll be holograms.