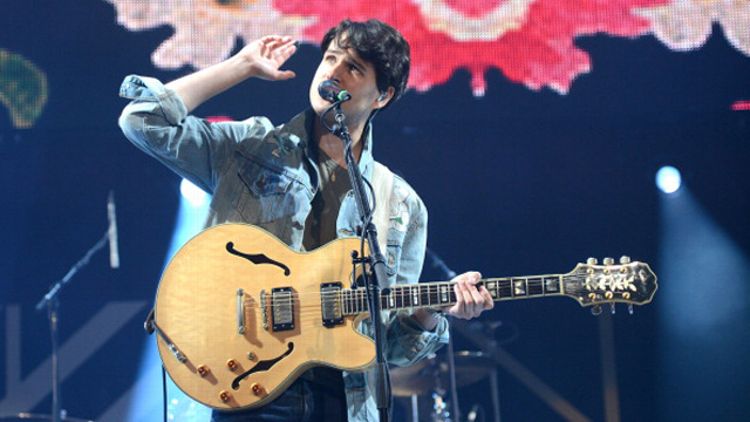 For Modern Vampires of the City standout “Step,” Vampire Weekend interpolated Souls of Mischief’s early B-side “Step to My Girl” (being the learned academics they are, they did so with proper accreditation), so this new MC-laden “wintertime remix” actually makes perfect sense. Heems takes us back to the leafy confines of the Wesleyan quad, Despot gets aggy, and Danny Brown’s yawp goes first, perfectly shattering a few brief seconds of serenity.

Just more than three years ago, with his verse on “Devil in a New Dress,” Rick Ross achieved Peak Rozay. On the track, Kanye kicks off with his winky class-clown flirt thing, and it’s adorable. But when, wisely, he gets out of the way, he lets Ricky, and the gorgeous beat, achieve communion: For nearly two minutes, with a devastating peppering of jabs, feints, and right hooks, Ross Talks His Shit. “New Mercedes sedan, the Lex sport / So many cars DMV thought it was mail fraud / Different traps I was gettin’ mail from / Polk County, Jacksonville, rep Melbourne / Whole clique’s appetite had tapeworms / Spinnin’ Teddy Pendergrass vinyl as my J burns / I shed a tear before the night’s over / God bless the man I put this ice over.” Whew! He, and we, were never the same. And so as he hops on the most “Devil”-y track off Yeezus, he gives good effort, but it’s mostly just a faint echo we hear.

Drake, “We Made It” feat. Soulja Boy

The two new Drake tracks (the former a Nothing Was the Same leftover, the latter via Soulja Boy’s original) gifted to us just before the end of the year reiterate three basic truths:

1. Say what you will, but this dude’s scraps are better than most dudes’ meals.

2. Also, amid all the emo hand-wringing we tend to forget, but Drizzy really is at his best when he doesn’t give a fuck.

If you really wanna flip the middle finger to the whole concept of proper punctuation and grammar, but you wanna do it in like a melodious and calm manner, try SBTRKT!

Eric Church, “Give Me Back My Hometown”

Advance word on the new Eric Church album, The Outsiders, is that it’ll be his most straightforward rock-radio effort to date. But with this, the album’s second single (first up was the as-advertised raucous title track), he’s given us a familiar sort of country tune: the kind of exquisitely crafted, nostalgically weepy ballad that, oh gosh, oh boy, are you crying, no, no stop, now I’m gonna cry, oh jeez, oh come here give me a hug we’re gonna be OK. [Sniffle.] We’re gonna be OK.

Even before Macklemore took his toothless B.S. nationwide, “Seattle hip-hop” wasn’t exactly a bountifully auspicious phrase. But Nacho Picasso is trying, one unwashed madman jam at a time, to right that wrong. This cut, off his new release, Trances With Wolves, is the necessary kind of druggy, Frasier-name-checking revenge fantasy: “Gave my ex a back rub with a Mack truck / did her like a speed bump / and then I backed up.”

Stephen Malkmus & The Jicks, Wig Out at Jagbags

Good news: The new Malkmus joint isn’t out till January 7, but you can stream it right now over at Amazon. To prepare yourself appropriately, make sure you first listen to Malkmus with Chris Ryan on the Triangle podcast and get all your context points down. As Malkmus explains, “There’s one song called ‘Chartjunk’ where I inhabit the mind of two prima donna–esque characters of the NBA, Scott Skiles and Brandon Jennings.”

Your trimonthly — amid all the perfumes and Moscato and rom-com BFF movie roles — “ohhhhh yeah Nicki Minaj can rap like a mf’er” reminder. Enjoy!

Putting evaluation of quality aside for a minute, let’s just applaud Kaiser Chiefs and the lads of the U.K. for at least continuing to attempt to make anthemic, soaring rock-and-roll music. Meanwhile, over on this side of the Atlantic, latest reports indicate that the popularity of guitar among musicians under the age of 45 has now dipped below not only computers, keyboards, and MPCs, but even “that sound you get when you hit a wrong tile on Minesweeper.” (Hear “Bows And Arrows” at Rolling Stone.)

Uhhh His Holines Darold Ferguson Jr. levitates to the heavens at the end. Ergo, this video is perfect.