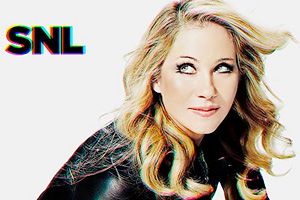 Do you remember when Kelly Bundy sang the “Bottles of Beer on the Wall” song? I do: “Eighty-nine bottles of beer on the wall, eighty-nine bottles of beer. If one of those bottles should happen to fall, eighty-ten bottles of beer on the wall.” I can’t remember how The Rime of the Ancient Mariner ends, or the last four digits of my husband’s social security number, or anything about the Battle of Tippecanoe, but if you want to talk about Married … With Children — which I didn’t even like very much (I know, go ahead and throw up all over me for that) — I’m like the Ben Stein of Bundies. So obviously, I love Christina Applegate, and love to see her bust a move and sing about the weekend before the start of the holiday propaganda season, even if that song is completely unspecific to her celebrity; no Up All Night references? No Maya Rudolph? Is that ominous or what? Anyway, it’s hard to go wrong with Applegate: She’s versatile, beautiful but relatable, pert but sort of strange (she was Donnie Darko’s sex fantasy, after all, albeit his second choice after Alyssa Milano). If she faltered at any point as SNL’s host last weekend, it was only by channeling Kristen Wiig a little too much as eccentric dance teacher Jillian Chizz. Sorry, I meant to put that name in italics because Jillian Chizzzzz.

But first, the cold open. Sudeikis and Killam were in great form as Biden and Ryan in a VP debate that was as close to the real deal as you could get, with the exception of Killam lapping water from a hamster beverage dispenser. It was a much more vibrant sketch than last week’s presidential debate spoof, but maybe that’s because the material was already so baby-bean, malarkey-guffaw rich — like a weird crème brûlée of buttoned-up political chit-chat theater. I’m not sure that Kate McKinnon’s Martha Raddatz brought anything to the table, but it didn’t have to: The sketch belonged to a widow’s peak drawn on Killam in what I bet was black eyeliner. Usain Bolt appeared to confirm that Ryan had not been at the Olympics, give a thumbs-up, and head backstage again to become “Californians”-ized. I really don’t care that the idea for him to appear on the show came from outer space; I enjoyed it.

Applegate’s monologue referenced her last SNL gig in 1993, during which she wore a black-and-white, contrast-stitch vestlike tank top that my screen has been frozen on for three minutes now, and which deserves its own paragraph, but I’ll just do that in my own mind. It was also the first episode in which Matt Foley, Motivational Speaker appeared to warn of the dangers of rolling doobies DOWN BY THE RIVER. Then she broke into song and dance, reviving her Sweet Charity jazz-dance lean and hand flourishes, as she chummed around with the Fruppets, the B-roll Muppets who show up when there’s no special holiday occasion. I don’t know about the Fruppets (Kerbie the Toad just looked like Kermit with acne), but Sudeikis’s “The Dane Cook” impression, the Fruppet version of the Swedish Chef, was top-notch (“You know, what if a dragon threw up?”). The song’s lyrics weren’t molto hilarioso, but it made up for that by being so well-executed and festive. Or not festive. I guess the point was we’re in the valley between festivities. How about “rousing.”

The “Masters of Style” Gillette commercial parody was going so well up until Jerry Sandusky (Sudeikis) showed up — there was no way that joke was going to land, which is a shame because the OG beard-trimming spot has been begging to be poked fun at since it first aired. Had to go with the pedophile joke, didn’t they? Couldn’t have stuck a tiny little mustache on Applegate or just gone in the obvious direction (Riff Raff; I know Tim Robinson could have nailed this). By the way, there is no reason Armisen should have been able to pull off a good Gael Garcia Bernal, but he did. Fortunately for me, and maybe me alone, we were then treated to another installment of “The Californians,” which certainly suffered from Wiig’s absence but also received a little lift from Killam’s wedding planner.

I hope they drive this sketch down Vineland, onto the 101, and into the goddamn ground: It may have its flaws, especially following its near-perfect first appearance, but I think this is one of those sketches that forever changes how you experience a certain scenario. I have not been able to talk about how I got to wherever I am without becoming horribly embarrassed since “The Californians” came into my life, and I have not been able to listen to someone else tell me about the traffic he or she encountered on Sepulveda without envisioning them staring into a mirror making the Bill Hader “Californians” face (otherwise known as the ORLY bird). Applegate — as Stuart’s betrothed, Bri — brought her own version of the SoCal flappy epiglottis to the weird chopped salad of this sketch, particularly when discussing how Fountain dead ends at that junior high school. So real. I had to give her credit for not getting too Wiiged-out in this one (as the token blonde hypotenuse in the Californians’ love triangle, it was hard not to). Lady did her thing. Usain Bolt popped up at the end of this one looking for his biological father, having sprinted there all the way from Motor avenue; I’m not sure this worked, but you know what, heap it on. Bring Mario Batali in. Give Warren Buffett a call. There is a Californian inside us all, just waiting to perch on a coastal living chair and eat something with antioxidants out of a ramekin.

Next was “Tech Talk,” during which Applegate played the host of a technology panel (Hader, McKinnon, and Thompson playing very believable geeks from Gizmodo & Co.) criticizing the new features of the iPhone 5 — right up until the Chinese factory workers who made it showed up to bring a little perspective to the first-world conundrum of map apps. Though this sketch was, in its way, brilliant (the most famous American-made product, diabetes!), I cringed a little bit when l’s turned into r’s and at lines like, “You want Starbuck?” I did, however, enjoy Pedrad’s sarcastic interpretive dancing, and Applegate was very smooth here as the straight woman moderator.

“Give Us Our Daughters Back” was the requisite impression vehicle, with Pharoah giving us his best Denzel Washington and Bobby Moynihan as Steven Segal with blurred-out exposed nipples. I don’t think I was vibing too much with Applegate’s Uma Thurman — it wasn’t her strongest moment, she let her costume do the mimicking — but blurred man nips will never fail to make my heart squeal with delight.

Passion Pit came next with “Take a Walk,” the song that makes me loco to Instagram my cheesy gorditas, and I have to say, I was disappointed. This season has had some great musical guests, and I found the Pit lacking by comparison — the only person who looked like they were having a great time onstage was one of the 6,000 keyboardists, the lady one, which I wouldn’t have minded if everyone else had been sufficiently miserable or moody. The intimacy of the camera makes a straightforward concert-style performance uninteresting to me on SNL, and I was really hoping for the kind of showmanship that would make me feel as though I was doing the drugs that I imagine a portion of Passion Pit’s listeners like. (Not “Smiles,” GOD, PLEASE NOT THE “SMILES.”) Nobody wore a tail or hung upside-down from a pole or pretended to float around on a raft. Nobody invited John Mayer. Nobody played arcade games during the bridge or wept softly. I was bummed.

“Weekend Update” was weaker than in previous weeks until Pedrad showed up as Arianna Huffington, calling Meyers a variety of pet names (“Sethly,” “my little potato pancake”) and wondering at a world in which men could become pregnant, where abortion clinics would pop up like Starbucks, and the morning-after pill would be available in cool-ranch and sea-salt flavors. My favorite line: “Sometimes my vagina will do something and I’ll be like, ‘What was that? Could you be serious?’” (Please don’t be talking about this, Arianna.) The always-divisive French Def Jam comedian Jean K Jean (Thompson) also stopped by the Weekend Update desk to hit Gruyère and hit it hard. Zut alors! I love Jean K Jean but maybe that’s just because I picture him leaving SNL and going home to a Louis CK existence of bewildered melancholy, listening to MC Solaar and having ill-fated dates with Parkier Posé.

The best offering of the night was definitely “Odysseus and the Sirens”: Odysseus (Sudeikis) and friends, aboard their ship, brace themselves against the sirens’ song (Applegate, Strong, and McKinnon) and seem almost like they’re going to make it until they get brain-thwacked with a series of ninth-grade semi-formal hits from the ’90s (“Stay,” Shania Twain, “Scrubs”). “Don’t judge!” implores Odysseus of his crew, “Just listen.” The vocals were great, especially from Applegate, and of course I will not argue with a model ship being set on fire at the end of a sketch. It was bizarre and out of left field, and I loved it. Extra points for the TLC hats at the end. If you were out at a sick rager, you’re out of luck because this one isn’t online. That’s the steep royalty price you pay for songs from Dawson’s Creek.

With nowhere to go from there but down, Principal Frye (Pharoah; he based the character on his high school principal) and the rest of the gang at Booker T. Washington high school led us through another meandering edition of the school dance, with Applegate as the Halloween-bedecked librarian (neither sexy Jedi nor Klan member, just a ghost). I’m sorry, but I haaaate these. Applegate did her best producing non-books (a Madden ’06 booklet among them) from the book donation bin, but lord have mercy, I just squirmed through this one like it was a “Secret Word” back from the dead.

Then it was Passion Pit time again, this time with “Carried Away,” and once more: no buzz. I did, however, wonder if the lead singer used the BedHead Bed Stick because his hair was immobilized in a very flattering way. It looked like it smelled like dried timothy hay and carrot muffins, and I became fixated on it like it was a fascinating hair aquarium. The final sketch of the night, “Choreographer,” smelled nothing like hay and cake, but I did not hate it despite this. This one was the Wiigiest of all, with Applegate’s Jillian Chizz, student of Bob Fosse, trying to teach four students a complicated jazz routine crammed with the requisite zaza’s, onzibowbows, and kuh-kunks. With a couple of good gems (Applegate’s dancing, the line “find it and play with it,” which is not worth explaining but, you know, titter titter) buried underneath a lot of black-capri-pants mincing and explicit comparisons between a flaccid penis and a steamed carrot, this was not the best note to end on. But it was much-improved when you watched with glassy eyes as you let your mind play a montage of Kelly Bundy footage over what was happening onscreen. Eighty-nine zazas and kuh-kunks on the wall. The discrepancy between the pothead teen Applegate last played, held hostage by Matt Foley, and the graceful triple-threat she’s become is kind of a trip. Even when she was telling her dance students about a former lover’s “dong,” there was something classy about her presence that kept things on point (and en pointe).

Next week! Bruno Mars and … Bruno Mars, for the second time as a musical guest and the first as a host. I love when hosts pull double-duty, especially when that person played Little Elvis in Honeymoon in Vegas.