Small(er) Movie Roundup: Because There’s Life After Man of Steel 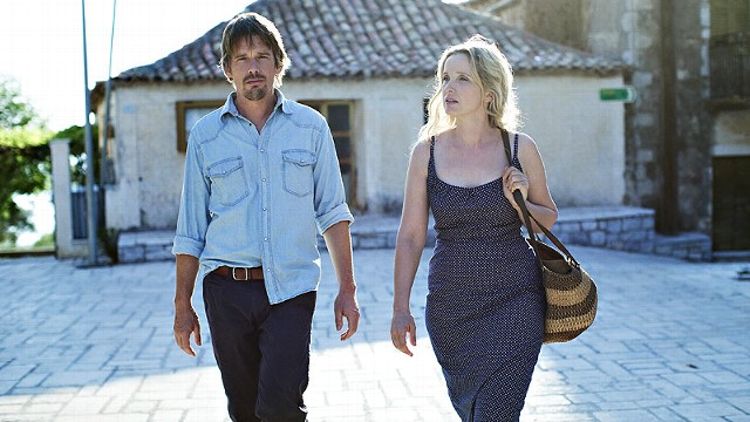 Before Midnight, directed by Richard Linklater

You know those accusatory, ticking-time-bomb questions two married people aren’t supposed to ask each other? Well, after two previous installments of complicated bliss (in 1995’s Before Sunrise and 2004’s Before Sunset), Celine (Julie Delpy) is going there on Jesse (Ethan Hawke). “What’s the name of the pediatrician?” “Would you notice me on a train now — like, right now?” Tell me you managed not to fuck the girl you met on your book tour!

That last one wasn’t a question. None of them truly are. But one of the glories of this movie is the way Celine expertly corners the slick man she’s now married, and how Jesse’s become an expert at evading capture. Another is the way Delpy, Hawke, and Linklater have managed to build a comedy around the creep of middle age and the way familiarity breeds not only contempt, but also security and insecurity. I’ve seen this movie three times, and each time I’m struck at the suspense in the film’s long, complete conversations, at how you’re able to laugh at the truth of what these two are still trying to do after meeting 18 years ago on a train, having an affair, and marrying.

Installment 3 finds Celine and Jesse (and their twin girls) at the end of a six-week Greek vacation. She doesn’t know what to do next with her career. He’s worried about his relationship with the teenage son he had during his first marriage. There’s a wonderful meal with some new friends and a night in a hotel room intended for romance. But we’re meant to see the other side of romantic comedy, the complex, frustrated, loving place real relationships wind up that the movies rarely confess to being aware of.

The film’s (re)watchability is a testament not simply to the wisdom imparted but to the dramatic musicality of its tone, the transparent rapport between the stars, and Delpy’s brilliant understanding that one key to playing matrimonial anger is to add a pinch of sarcasm to cut the sense of oppression. But Hawke is just as good at remaining cool while Delpy overheats. Both actors make you feel why each is good for the other. This is a universal X-ray of bourgeois love, one that in a few decades will get around to something like Amour. In the meantime, when Celine reduces male desire to “kissy-kissy, titty-titty, pussy, snore,” you don’t know whether to just say “Amen” or call a literary agent.

This Is the End, directed by Evan Goldberg and Seth Rogen

No, it’s not cool that Satan here is a dream rapist, that Rihanna falls through the earth into the pits of hell, or that Emma Watson and her ax have only one scene. But this comedy, which Goldberg and Rogen also wrote, takes literalism to not-stupid extremes. The years people like me have spent carping about the problems of the so-called bromance, often at Rogen’s expense, have produced a movie that wants to call mocking attention to its excesses and privileges and then burn them down.

That’s how you wind up with Rogen, Jay Baruchel, James Franco, Jonah Hill, Danny McBride, and Craig Robinson playing themselves in an apocalyptic stoner flick that features a tractor beam to the pearly gates. They’re trapped in Franco’s mansion while Los Angeles burns around them. Goldberg and Rogen work with a sense of philosophy and morality. They speculate about God and laugh at exorcism movies. A crazed actress slashes a plaster penis in half. The movie is obviously on drugs, but they’ve given its makers a kind of clarity. There’s wonder here that films with quadruple the effects budget would kill for.

The East, directed by Zal Batmanglij

Is Brit Marling something that can be turned into? She plays Sarah, an agent at a D.C. intelligence consulting firm, and when her air conditioner of a boss (Patricia Clarkson) sends her undercover to infiltrate an ecoterrorist ring, Marling checks into a motel and turns her hair from brown to her usual big blonde. Hollywood seems to want her in brainy girlfriend/daughter parts: PhD candidate Daryl Hannah. But she and Batmanglij have a really good art-house thing going. They wrote this movie, and it’s sharper and more convincing than their cult-infiltration movie from last year, The Sound of My Voice.

Sarah pauses life with her clueless Beltway beau (Jason Ritter) and joins a gang of sexy leftists called the East. They allege to be squatting in an abandoned woodland manse. They claim, too, that they’re leaderless. But Alexander Skarsgaard’s holy-hipster beard says, “Come unto men” and come Sarah does, as Ellen Page seethes with bisexual envy. Together, they do “jams” — kidnappings, mass poisonings — meant to teach big oil and big pharma a lesson. Will Sarah bring them all down? Or will she go East?

The mix of radicalism, naïveté, and forest-bound sex flirts with the absurd. But Marling and Batmanglij have an interest in rituals and devotion and the accompanying exploitation of belief. As artists, they’re not dissimilar from an idiosyncratically talented filmmaker like Shane Carruth. But they appear to enjoy the power of storytelling. Carruth wants to obfuscate story and frustrate comprehension, and for no appreciable aim, really. Marling and Batmanglij don’t fear or resent entertainment: They make effective thrillers. With each successive collaboration, you can feel them slowly coming in from the margins. If they reach a major studio and bigger budget, they could be the right kind of dangerous.

How do you make a watchable film about a tedious, tiresome person? Frances (Greta Gerwig) — the 27-year-old underemployed dancer at the center of this movie — insults, freeloads, and hijacks dinner parties. She has only the vaguest sense that she’s not cut out for most of what she pursues. Her narcissism is vividly tedious. Another movie would have tried to mature her or turn her into a joke. But Baumbach loves, loves, loves her. He wrote the script with Gerwig, whose flaky fuzziness tends to have this effect on directors. Baumbach happens to have been the most affected: They’re a real-life couple.

Maybe this is an older, artier cousin of Girls — Adam Driver does a saner version of his HBO self, but Baumbach and Gerwig are focused on the bond between Frances and her best friend, Sophie (Mickey Sumner), and the way friendships change when life changes. (With her dark features, long face, and general sourness, Sumner looks like something on loan from a Mike Leigh movie.)

The aim with these characters is more to get toward some kind of truth than likability. This isn’t a deep film, and the ponderous argot padding it (“Tell me the story of us,” says one character to the other; “21st century? What up!”) suggests the friction in the difference between their ages (he’s 14 years older). The sense of place (Brooklyn, Paris, Poughkeepsie) and black-and-white photography almost excuse the forced authenticity. This is not the cinematic rock and roll of his cri de divorce, The Squid and the Whale, or the socially apocalyptic smoke signal of Greenberg.

Often when a director adores his star, it results in fetish, abuse, nausea, or deification. (With Nicolas Roeg and Theresa Russell, it was all four all the time.) Baumbach is just besotted. One of the happiest sights you’ll see all summer is a montage of Gerwig running and twirling across Chinatown with David Bowie’s “Modern Love” on the soundtrack. Baumbach sees beauty marks on Frances where a lot of us see warts.

The Internship, directed by Shawn Levy

In which Owen Wilson and Vince Vaughn lose their analog sales jobs, land summer gigs at Google, and luxuriate in all the free stuff at their disposal. Wilson chases Rose Byrne. Vaughn chases any human who will laugh at him. He wrote this movie with Jared Stern. His bad-luck vulnerability needs a movie brave enough to do more than laugh it off. It’s almost touching watching him try to talk his way out of having to study for a test. The comedy here is supposed to come from the competition for permanent employment with entitled freaks and geeks half their age, and in that regard it’s a lousy sitcom that doubles as one of the most shameless commercials I’ve ever seen. (At this point, of course, it might be no more so than Titanic was an ad for water.) What’s distressing is the movie’s applying romantic-comedy plot points to a megabusiness: boy gets corporation. You don’t need a heart to like this movie. You need an MBA.