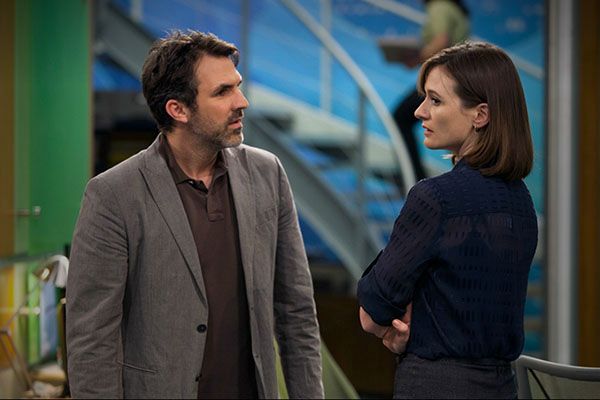 Editor’s note: As evidenced by last week’s slew of Jim/Maggie fanvids, the Newsroom fan community has been more and more prolific as the season has worn on, which is why, in lieu of hot speechification, this week’s ‘shipping report will feature the hot fanworkification that has been the fruits of their labor. If you don’t know what I’m talking about, just search Don Keefer on Tumblr and see if it doesn’t make you feel a little less alone in the universe.

There’s only one week of The Newsroom left, and it’s as if Sorkin & Co. realized they were given a quantity of smoldering glares that will expire if they don’t use them up by the end of the season. This makes for eminently ‘shippable, GIF-able television, but so far the good folks at fuckyeahwillmac.tumblr.com have been dragging their feet. (Otherwise I would totally have embedded Will’s face post-crazy-Mac-speech, which in five steamy seconds conveyed all the passion and drama locked away in Habib Sr.’s volumes — VOLUMES! — on Willkenzie.) These are the most fascinating people on television, and their feelings have never been more important.

“Fill me up. I have an idea,” Mac said as she handed him her wine glass and started rummaging around her bag. Will did as she said and had a smirk on his face at her rushing around trying to set something up with her laptop. She looked at him with a big smile on her face, as her laptop screen was on his TV.

She threw a pillow at him. “And if it was a secretly taped sex tape?” He smirked. “THAT should have been your opening line when you first saw me.”

A worried look crossed her face. “We don’t have one of those, do we? Because if TMI gets … ”

“Relax, Mac. Unless you secretly made one, I sure didn’t. No good newsman would document something he didn’t want anyone to see,” he assured in his elitist media journalist voice.

“Ok. Don’t interrupt me until I finish,” she ordered, holding his gaze. He gave a slight nod and she continued.

Apparently, the whole “second first date thing” was pretty much dead in the water until a goofy, ill-timed misunderstanding (“Maggie talked me into it!”), which seems like a really solid foundation for a second try for this nonexistent relationship. While I appreciated what Jim and Maggie did to make sure Lisa didn’t have to feed the beast, and I’m sure it made Lisa feel very protected and cared for and whatnot, and she got to prove she was worth more than her Fashion Degree at Fashion College, WHY ARE WE PRETENDING THIS IS A THING? Gather ye roses and stuff. Falling Down: official office slut of ACN. Almost everyone has gotten some pratfall action. I suppose that having Will fall down — with his pants down, no less — is supposed to make us think that Will is just as foolish as Mac is in her more deranged moments, but it was more or less canceled out by his dramatic entrance through the fog after Lisa’s shop came under some pretty predictable pro-lifer fire. Give us some archival footage of Mac in Afghanistan walking away in slow motion from an IED attack while putting a cigarette out on a terrorist and then we might be even.

This week, Don received some magical plot-device flowers from a secret lady, which Jim signed for, GLEEFULLY, I BET, in a deleted scene that will be on the Newsroom Season 1 DVD I’ve already preordered on Amazon. I can’t believe this episode would drop a bomb of this magnitude without revealing who was responsible for such a bold botanical gesture, but I’m guessing we’ll find out. Or maybe we won’t. I feel like every time Another Woman enters the picture on The Newsroom, they are either so obviously inconsequential that they don’t even get camera time/a name, or they are Hope Davis or Mac. I bet it was Mac. She’s such a wild card.

So does this mean that Daggie is official donezo? LOL, of course not.

Hottest fanworkification:
This may come as a surprise, but the Don/Maggie community isn’t especially prolific (or existent). HOWEVER. Tumblr-wise, Jim & Maggie have been the reigning champs of the Newsroom ‘shipping game, but the tide seems to have been turning in the last couple weeks. I’m all for this shift, because Jim has really been letting me down recently. If you had already made up your mind that you were going to declare your love for a girl who was living with her Master of the Dark Arts boyfriend, and you got as far as ringing their doorbell and showing up at their front door in the middle of a drinks ‘n’ domesticity sesh, would you really 180 and agree to go on a dumb walk with her fashiony roommate? Maggie, I know this is hard for you to hear, but if the situation were reversed, Don would have totally busted in that door being all “I UNDERSTAND I’M NEEDED!?” and tossed Jim’s random heterosexual domestic beer in his face and whisked you away to the nearest tall building with a suitably inspiring view of the Statue of Liberty. But like all the best fanfics, this scenario has no basis in its source material’s reality, except for the part where Don is passionate and proactive and knows what he wants. Let’s talk about Don some more.

Hottest fanworkification:
Someone made a Jaggie-themed mix CD. I haven’t listened to it yet, but it feels important. The Internet really wants this to happen, and the Internet is not wrong about that.

Artist’s statement: “i agree, i would love to see them together but in the future, i want them to grow and set a foundation first, be friends. Besides i completely agree with the fact that Don and Sloan are much more fitted that [sic] Don and Maggie.”

Here's Something to Feel Good About Today: Chris Gethard Is Maybe Getting an IFC Show