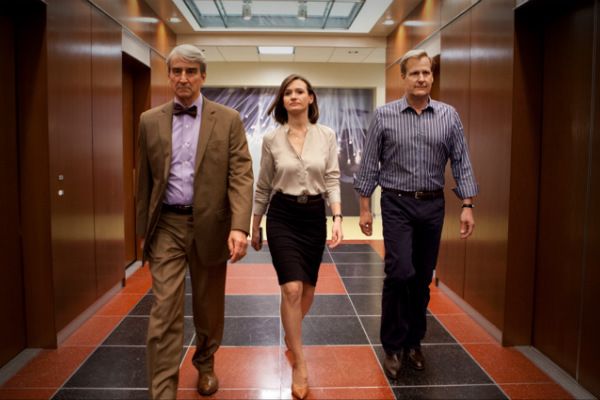 It’s been more than a year since Mac originally held up her hand-drawn signs and inspired Will to be the integrity, and since then she has perched, pixie-like, on his shoulder, nodding along as he ultimately made all the Right Decisions, and forgiving him his superficial flaws, like the smoking habit, and the tendency to use his show as a bully pulpit. But this week not even Will McAvoy could resist the power of the Anthonys Twain (Casey and Weiner). I was originally thinking that if Mac were an actual pixie, she’d be Crysta in Fern Gully, who turned a human man into a boy pixie so they could save the universe together, but this week she’s more like the Pan’s Labyrinth pixies who try in vain to stop their master from eating the big delicious Casey Anthony grape, and wind up getting their heads chewed off by Jane Fonda.

As if things weren’t hard enough for McMac this week, Will also invites scruffy reporter/Mac’s ex Paul Schneider over to profile him for New York Magazine … why? To make himself look better in comparison? To insult his integrity as a blAAHHHgger? (I bet there was a whole day during this season’s rehearsals where Sorkin taught the cast how to pronounce the word “blog” with as much disgust as possible.) If this were a reality show I’d say the producers set up a way to bring the guy Mac cheated on into the mix just to manufacture tension, but this is a scripted drama, so … oh. Wait.

Mac: “Sorry about the outburst in there.”
Will: “Yeah, I’m not sure it’s all about Casey Anthony.”

Every week, I eagerly await the point in the show where the characters acknowledge that It’s Not Just About [fill in current event here, implying relationship drama]. This one came in before the 10-minute mark, and it’s a real beaut.

You can see what Mac saw in Brian Brenner: He’s got cute glasses, and, like Will, he’s smug and insufferable, but less in the millionaire-TV-personality way and more in the out-of-work journalist-with-a-deep-resentment-for-his-ex’s-success way. Plus, he’s part of the elite alliterative-names club (Mackenzie McHale, Sloan Sabbith, Leona Lansing, Lisa Lambert), which means his name is that much more fun to spit out disdainfully in the middle of their rapid-fire, witty banter. And next week he’s going to flat-out tell Mac that Will doesn’t want her, which will inevitably send her into a deranged tizzy of self-doubt right in the middle of the office followed by an all-night cosmo bender and eventual alcohol-and-desperation-fueled lowering of inhibitions. This guy is good.

Mac: These are extraordinary circumstances.
Brian: That’s what everyone says when they abandon their principles.
Mac: I’m no longer required to live up to your standards.
Brian: Fair enough.

I had forgotten all about the informant from last week, so as the music swelled and Charlie strutted into the New York Public Library to meet a man wearing a carnation, I just thought we were seeing what Charlie is up to when he’s off the clock, and needless to say I was INTRIGUED. Turns out he was there to meet Ezra Schneider, an NSA cryptologist who makes Dark Knight references and wants to break The Newsroom‘s first fictional news story: that TMI, the AWM-owned tabloid rag, is up to the same phone-tapping, e-mail-hacking shenanigans as News of the World was.

Plot developments aside, I don’t care much for this ‘ship. Ezra brings out Charlie’s intrepid-reporter side, and I really just want him to get drunk and threaten to punch things again.

The Newsroom is fun and exciting to watch because every so often a character will go off on a rant that seems so out of left field you can’t tell if it’s supposed to be a joke about how manic and unhinged these people are, or of it’s supposed to be a legitimate piece of character development. So, Maggie is a Christian now? Or she’s pretending to be one for the sake of debate? I can’t tell, but she is very angry. Something tells me she probably wasn’t a fan of the classic Studio 60 sketch “Crazy Christians.”

Hottest speechifying:
Mac: (entering the conference room) All right …
Maggie: Just a moment, please. I’m standing up for the tens of millions of Christians who are tired of being represented by … having our identities … there’s been an identity theft! That’s it, that’s the one I want.”

Oh hey, guess what? It’s way more interesting to watch Don “Master of the Dark Arts” Keefer school us on how to do a captivatingly sleazy newscast than it is to watch Will & Mac run around wringing their hands about integrity. No wonder he’s got such a hold on Maggie; his understanding of the female psyche (or, at least, the female ACN psyche) is more than a little unnerving. You know that every girl in that room was secretly melting inside when he told them all how much Caylee Anthony inspired their maternal instincts.

Hottest speechifying:
Basically everything that came out of his mouth this week, but let’s just go with this:

“Forget everything you know about the news.”

OK, so they didn’t get any screen time together (by the way, hello, Jane Fonda, so good of you to drop by this show you apparently are a regular on), but the Lansings really came into their own this week — they’re like the Lannisters of mediocrity and illegal phone tapping. I want to know more about the House Lansing: What’s their sigil (The vulture? The self-cannibalizing Gryllacrididae crickets?). What are their words? (“Blood and Fire and Ratings”?)

“You let [Will] know that he is one tabloid fuck-up and a ratings point away from having his own podcast.”

Troll club? TROLL CLUB. Neal just discovered Aaron Sorkin’s interpretation of what 4chan is and nobody at ACN is on the Internet enough to know that nothing about this is in any way news. TROLL CLUB.