Shia LaBeouf’s Defense of His Blatant Plagiarism and Disingenuous Skywriting, in His Own Words 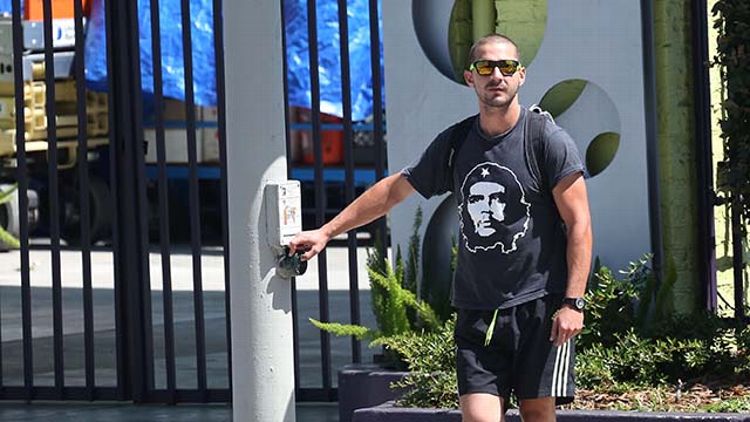 Two Shia LaBeouf posts in one day? 2014 is off to some kind of start! Following yesterday’s facepalm-inducing skywriting antics, a fantastically insincere “apology” by LaBeouf for shamelessly ripping off comics author Dan Clowes’s story Justin M. Damiano in his short film HowardCantour.com, the artist formerly known as Sam Witwicky was reached via email by Bleeding Cool’s Rich Johnston and engaged in a somewhat lengthy, intermittently entertaining, frequently stupid tête-à-tête about everything from copyright law to the definition of art to, uh, parking tickets. Johnston does an admirably coolheaded job of sparring with LaBeouf’s ever-shape-shifting bullshit machine, as seen in this exchange:

RJ: Jung said the only way to achieve true selfhood is to create what no one but you could possibly create and all the other stories are just guides to get us there.

I think God’s rights to rivers have entered into public domain now.

I don’t believe that parking violations deserve the death sentence. However fines are meant to be paid. If you park on someone else’s driveway, you should probably ask permission first. And hotwiring someone else’s car and taking it for a spin, is also frowned upon.

(Johnston even had the integrity to cite the Jung point to his friend at the bottom of the article, something he definitely didn’t have to do but certainly was a nice button to the conversation.)

Honestly, go read the whole thing, less for LaBeouf’s undercooked undergrad philosophical meanderings but for Johnston’s excellent responses to them. Yeah, you’d think that it’d be inherently interesting to see some unedited email transcripts from a relatively high-profile star who has definitely gone off the deep end in the last year, but it all comes off as boringly familiar to anyone who got a liberal arts education alongside any variety of white dreadlocked/perma-barefoot self-described paradigm shifters. Lots of us have had moments where we’re all “whoaaa what does the word ‘authorship’ even mean, maaan?” and then we put down the bong and finish our term papers (and also, albeit maybe years later, eventually realize that one’s artistic philosophy should probably take a backseat to, like, not being a dick). So it would be a benign “just a phase” type of thing except LaBeouf is a 27-year-old millionaire (Johnston: “Do you recognize an inherent hypocrisy in your principles, in that you are a direct beneficiary of current copyright law, in that you have financially benefited from it to a far greater extent than most authors will ever achieve?” SHIA LABURNT!!!!) and he’s taken his Semiotics for Dummies* musings and put them to harmful use against another artist. (I say “another” charitably.) I want to say it’s cute how much LaBeouf thinks he’s blowing our minds, but that moment ended a long time ago, if it existed at all.

On the bright side: Hey, at least a few more people have heard of Dan Clowes now! Go read (or reread) David Boring or Like a Velvet Glove Cast in Iron and have your mind blown for real.